The long shadow of Facebook censorship is getting more onerous with each passing day of Joe Biden’s presidency.

On Tuesday, the social media giant suspended the account of Robert A.J. Gagnon, a professor at a Christian university. Why? Because he dared to criticize Biden’s executive order allowing individuals who identify as transgender to serve in the U.S. military.

In his Facebook post, Gagnon warned that Biden’s transgender military policy would hurt female soldiers because they’ll be forced to shower with men who identify as women.

Gagnon, a professor at Houston Baptist University, has a doctorate in theology and sexuality from Princeton Theological Seminary.

He called transgender ideology a “pseudo-science” that rejects basic biological facts and compared it to a “religious cult.”

He also scoffed at the invasion of men (masquerading as transgender) into women’s sports, saying it’s unfair to female participants.

“Promoters of ‘transgenderism’ do indeed exhibit traits of a religious cult in their mind-numbing, science-denying conformity,” Gagnon wrote, according to PJ Media.

“There was absolutely no incitement to violence on our part. We abhor violence done to any person,” Gagnon told PJ Media. “This is just a thinly veiled and pathetic excuse for censorship of any critical views toward trans-tyranny over our consciences, religion, and reason.”

Should taxpayers foot the bill for the gender-reassignment surgeries of transgender military personnel?
Yes: 0% (1 Votes)
No: 100% (695 Votes)

He said left-wing cancel culture, in coordination with Big Tech censorship, is silencing conservatives in a chilling demonstration of “rapidly accelerating public censorship.”

“Only one point of view is being allowed,” the professor noted. “[Former President Donald] Trump was not the great danger to the republic. Left-wing canceling is.”

On Wednesday, Gagnon warned that Facebook (and other left-wing tech giants) will cavalierly use “incitement to violence” as a blanket pretext to censor conservative viewpoints.

“‘Incitement to violence’ will be the constant pretext for denying you free speech & free exercise,” he tweeted. “That’s why FB banned me for a day. That’s the whole basis of the impeachment of Trump, even after leaving office.

“Dems are out to cancel u. A call to act ‘peaceably’ is irrelevant.”

“Incitement to violence” will be the constant pretext for denying you free speech & free exercise. That’s why FB banned me for a day. That’s the whole basis of the impeachment of Trump, even after leaving office. Dems are out to cancel u. A call to act “peaceably” is irrelevant.

While Gagnon was suspended from Facebook for one day, his friend Laurie Higgins, a writer with the Illinois Family Institute (a Christian group), was banned for seven days for a satirical post criticizing transgender advocacy as a “cult” whose goal is to spread “alchemical pseudo-science.”

Facebook accused Higgins of engaging in “hate speech” because she objected to women soldiers being forced to shower and bunk with men who identify as female. 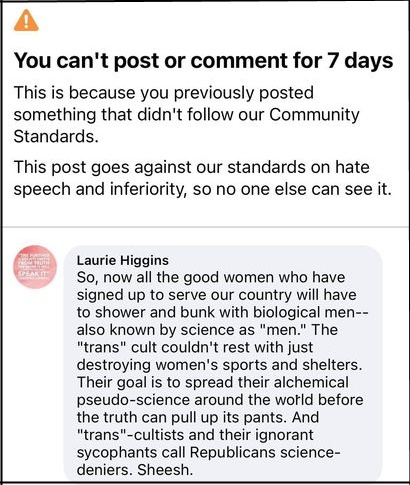 Meanwhile, even some LGBT advocates oppose Biden’s transgender military policy. Miriam Ben-Shalom is a lesbian who was reinstated to the U.S. Army after getting forced out for her sexuality.

She believes that transgenderism is a “mental aberration” that carries heavy emotional and psychological stresses that are unsuitable for the military.

“As a Vietnam-era veteran (I was a drill sergeant, E-6 71L3X) and a lesbian, I have thought long and hard about this issue,” she told PJ Media in 2019. “While I’d like to say, ‘Let them serve,’ I have come to the conclusion that it is correct to disallow transgender people to serve for the most part.”

Ben-Shalom said being a soldier is difficult enough without the added stresses of transgender-related emotional traumas.

“That’s terrible. These people need help!” Ben-Shalom told PJ Media. “But they don’t belong in the military. Who is willing to take a chance and place a gun in the hands of a person who might want to commit suicide?”

In 2019, the U.S. Supreme Court upheld Trump’s move to block transgenders from enlisting in the military.

While liberals attacked his policy as “transphobic,” he pointed out that the function of the U.S. military is to ensure national security — it’s not a forum to conduct social experiments.

In 2017, the Family Research Council estimated the total cost of transgender recruits at $1.9 billion to $3.7 billion over 10 years.

“We are asking the American people to invest their hard-earned money in national defense. Each dollar needs to be spent to address threats facing our nation,” Republican Rep. Vicky Hartzler of Missouri said in a 2017 statement.

“The costs incurred by funding transgender surgeries and the required additional care it demands should not be the focus of our military resources.”

In recent weeks, The New York Times has heaped praise on 'The Woman King' for its black female protagonists.
By Michael Austin  September 27, 2022

Gutfeld Thinks He Has His Finger on Why His Show Is Successful, Offers Advice to 'The View's' Sunny Hostin

When a show like Gutfeld dominates in the ratings, everyone wants to know how the secret sauce of its success can be recreated.
By Elizabeth Delaney  September 27, 2022

NASA successfully crashed a spacecraft into an asteroid as a test to build a defense for Earth against dangerous asteroids.
By Abby Liebing  September 27, 2022

CNN producers must have forgotten to prep one of the most prominent voices in Italian politics before he was brought on the air Monday.
By Matthew Holloway  September 27, 2022
Next