These are the famous faces who passed away in October 2019.

Bill Bidwill, the owner of the Arizona Cardinals, died peacefully on Oct. 2, 2019. The 88-year-old had been the sole owner of the NFL team since 1972.

“We will remember him as a man devoted to the three central pillars of his life – his immense faith, his love for his family and his life-long passion for the Cardinals and the sport of football,” Cardinals President Michael Bidwill said in a statement following his father’s death.

Actress and singer Julie Gibson, 106, died in her sleep on Oct. 2, 2019. She was perhaps most well known for appearing in several Three Stooges shorts like “Three Smart Saps” and “Sock-a-Bye Baby.”

Julie Gibson, singer in ‘The Feminine Touch’ and ‘Hail the Conquering Hero,’ dies at 106 https://t.co/VVumfsvHhM pic.twitter.com/fgodHWRjrB

Punk rock singer-songwriter Kim Shattuck died on Oct. 2, 2019, at the age of 56. Shattuck cemented herself as a punk rock icon by playing in bands such as The Muffs, The Pandoras and The Coolies.

Diahann Carroll was 84 years old when she died on Oct. 4, 2019, after battling breast cancer. The Oscar-nominated actress was best known for her role as Julia Baker in the late-1960s and early 70s comedy “Julia.”

We are sad to say goodbye to a true icon, Diahann Carroll. The first African-American Tony winner in a leading role, winning for her performance in No Strings in 1962. #DiahannCarroll pic.twitter.com/C9VCzwuJmt

British actor Stephen Moore, best known for his roles in “Doctor Who” and “The Hitchhiker’s Guide to the Galaxy,” died on Oct. 4, 2019. He was 81 years old.

Our dear friend Stephen Moore has died. A fine actor, a lovely man and the original and most iconic voice of Marvin The Paranoid Android in The Hitchhikers Guide To The Galaxy. Our thoughts are with his family and our memories of him will always make us smile. RIP Stephen. pic.twitter.com/d01PFDpVDq

Karen Pendleton, one of the original Mouseketeers on “The Mickey Mouse Club,” died on Oct. 6, 2019, after suffering a heart attack. She was 73 years old. 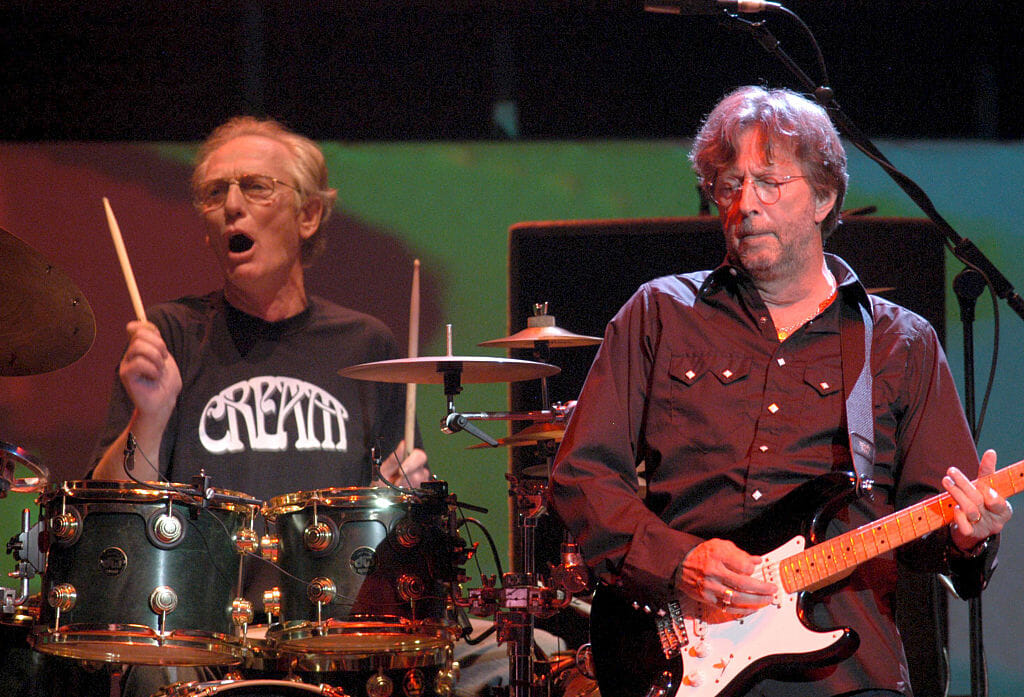 Cream in concert at the Royal Albert Hall in London, Britain in 2005. (Brian Rasic / Getty Images)

Actor and comedian Rip Taylor, also known as the “King of Confetti,” died on Oct. 6, 2019, at the age of 88 after suffering a seizure.

Actor and comedian Rip Taylor, known for his over-the-top personality and love of confetti, has died at 84 https://t.co/hzB5GFYmkM pic.twitter.com/AKgEGIJ4kJ

The screenwriter who created “Saved by the Bell,” Sam Bobrick, died on Oct. 11, 2019, after suffering from a stroke at the age of 87. He also wrote for such programs as “The Smothers Brothers Comedy Hour” and “The Andy Griffith Show.”

I wrote a remembrance of my dear friend, the writer Sam Bobrick, who died today at age 87. Sam’s achievements included an uncredited re-write of “The Wiz” before it opened on Broadway, being a towering mensch, and creating “Saved by the Bell.” #rip https://t.co/l2fYuytwga

Oscar-nominated actor Robert Forster, know for his roles in “Jackie Brown,” “Last Man Standing” and “Breaking Bad” passed away on Oct. 11, 2019, after battling brain cancer. He was 78 years old.

Soap opera actor John Clarke passed away on Oct. 16, 2019, after suffering from pneumonia. The 88-year-old actor was best known for his role as Mickey Horton on “Days of Our Lives.”

Robert Evans, the legendary Paramount exec and consummate Hollywood producer behind films like ‘Chinatown’ and ‘Marathon Man,’ has died at age 89 https://t.co/Wvsq5yM8Vd pic.twitter.com/JcfEFfY062

Actor John Witherspoon died in his Los Angeles home on Oct. 29, 2019. The 77-year-old comedian began his television career in 1970s shows such as “Barnaby Jones,” but his most recognizable role was in the “Friday” film franchise, where he played Ice Cube’s father.

I’m devastated over the passing of John Witherspoon. Life won’t be as funny without him. pic.twitter.com/gtmiZiEppP

Oscar-nominated writer Bernard Slade, who created “The Partridge Family,” died on Oct. 30, 2019, after suffering from dementia.

Bernard Slade, the Oscar-nominated writer who created The Partridge Family has died at the age of 89.
In 1971, the group were nominated for a Grammy as the Best New Artist and is still one of the great musical families ever portrayed on television. pic.twitter.com/31CTtCmKGr