In a scorching letter to Speaker Nancy Pelosi of California and several committee chairmen, the White House tore apart the House Democrats’ attempts at impeachment piece by piece.

The letter, issued Tuesday on behalf of President Donald Trump, dismantles the Democrats’ impeachment inquiry as biased and unconstitutional.

For an official document, this missive doesn’t pull any punches.

“Put simply,” it states, “you seek to overturn the results of the 2016 election and deprive the American people of the President they have freely chosen. Many Democrats now apparently view impeachment not only as a means to undo the democratic results of the last election, but as a strategy to influence the next election, which is barely more than a year away.”

Considering all the Democrats have put Trump and his team through, it’s shocking that this aggressiveness is just now being seen.

As the letter mentions, some Democrats’ careers depend on impeachment. People like Rep. Al Green of Texas are expected to deliver on their years-old promises to oust Trump from his office. A failure to do that could see another Democrat take them on with great success.

For a president who has allegedly committed impeachable offenses, Trump has been remarkably open.

A transcript of his July phone call with the president of Ukraine, the subject of the original whistleblower’s complaint, was released right after the accusation of wrongdoing was made public. Guilty people don’t usually share evidence like this.

Speaking of evidence, the letter lands a direct hit on Schiff for his fabrication of dialogue relating to the call.

“The fact that there was nothing wrong with the call was also powerfully confirmed by Chairman Schiff’s decision to create a false version of the call and read it to the American people at a congressional hearing, without disclosing that he was simply making it all up,” the letter reads.

Schiff also lied about his connections with the whistleblower, something for which even liberal media outlets criticized him.

The letter doesn’t stop with Schiff, either. It goes on to list numerous ways in which the inquiry is “constitutionally invalid.”

RELATED: Look What Nancy Pelosi Said Just 10 Years Ago When a Mob Invaded a State Capitol

“In the history of our Nation,” it says, “the House of Representatives has never attempted to launch an impeachment inquiry against the President without a majority of the House taking political accountability for that decision by voting to authorize such a dramatic constitutional step.”

The letter further says Pelosi and the Democrats have stripped Trump of “most basic protections demanded by due process under the Constitution.”

In another scorching paragraph, the letter cuts to the heart of the impeachment inquiry and the reasoning many suspect is really behind it: an attempt to keep Trump out of the 2020 election.

“The effort to impeach President Trump — without regard to any evidence of his actions in office — is a naked political strategy that began the day he was inaugurated,” it says, “and perhaps even before.”

Slamming the inquiry for a lack of “any legitimate constitutional foundation, any pretense of fairness, or even the most elementary due process protections,” the letter makes it clear that the president won’t cooperate in this obviously partisan attack.

With the impeachment obsession now interfering with Trump’s ability to do his job of leading the country, the document sent to Democratic leaders begs them to join with him and begin tackling the real issues facing the nation.

The letter asks Democrats to abandon the clearly biased impeachment inquiry and instead focus on creating the change that Americans really want to see.

With how deep those on the left have dug themselves into an impeachment hole, however, it now looks like their only option is to keep on digging until the walls fall in on them. 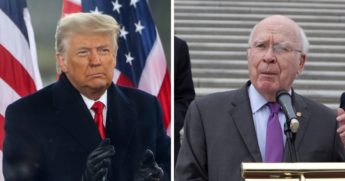