If you’re a home-schooled student who has Ivy League dreams, you already know the deck is stacked against you.

Home-schooled students are underrepresented at all eight Ivies. If you want to know why, Erin O’Donnell can help explain.

O’Donnell isn’t necessarily an official mouthpiece for the Ivy Leagues, but her article in Harvard Magazine can give you a bit of insight in terms of how America’s establishment views your right to school your own child. You likely won’t be surprised to know they’re not fans.

The article is from the May-June 2020 issue, which I’m sure was planned in advance before, ahem, other more pressing issues presented themselves. Anyhow, “The Risks of Homeschooling” basically makes educating your own child sound a lot like letting them smoke two packs of Marlboro Reds a day — except you socialize your progeny when he or she hangs out with the cool kids during cigarette breaks, so there’s at least that.

To be fair, while O’Donnell’s name might be on it, the real star of the article is Elizabeth Bartholet, a Harvard Law professor who takes a dim view of your capacity (or legal right) to be responsible for your own child’s education.

And this doesn’t just mean your child misses out on stuff, mind you. Bartholet says she “sees risks for children—and society—in homeschooling, and recommends a presumptive ban on the practice. Homeschooling, she says, not only violates children’s right to a “meaningful education” and their right to be protected from potential child abuse, but may keep them from contributing positively to a democratic society.”

I understand your child should have the right to get into any educational institution they’re qualified to enter, particularly if that institution is basically a conduit to the rarefied nodes of power in this country and abroad. However, look at those sentences and think if you really want your child to be educated in an environment where this passes as sound legal advice.

This is also just the beginning of a truly stunning piece of elitism, so if you’re sensitive or have high blood pressure you might just be better turning on the TV — wait, that’s just as bad, so you might as well stay here and hear Bartholet tell you home-schoolers just how much you’re screwing up your kid and how things would be so much better if the government forced you to send them elsewhere for their education.

But first, let’s deal with the original image that went with this article:

Do you think this Harvard Magazine article offered a compelling case against home schooling?
Yes: 2% (21 Votes)
No: 98% (913 Votes) 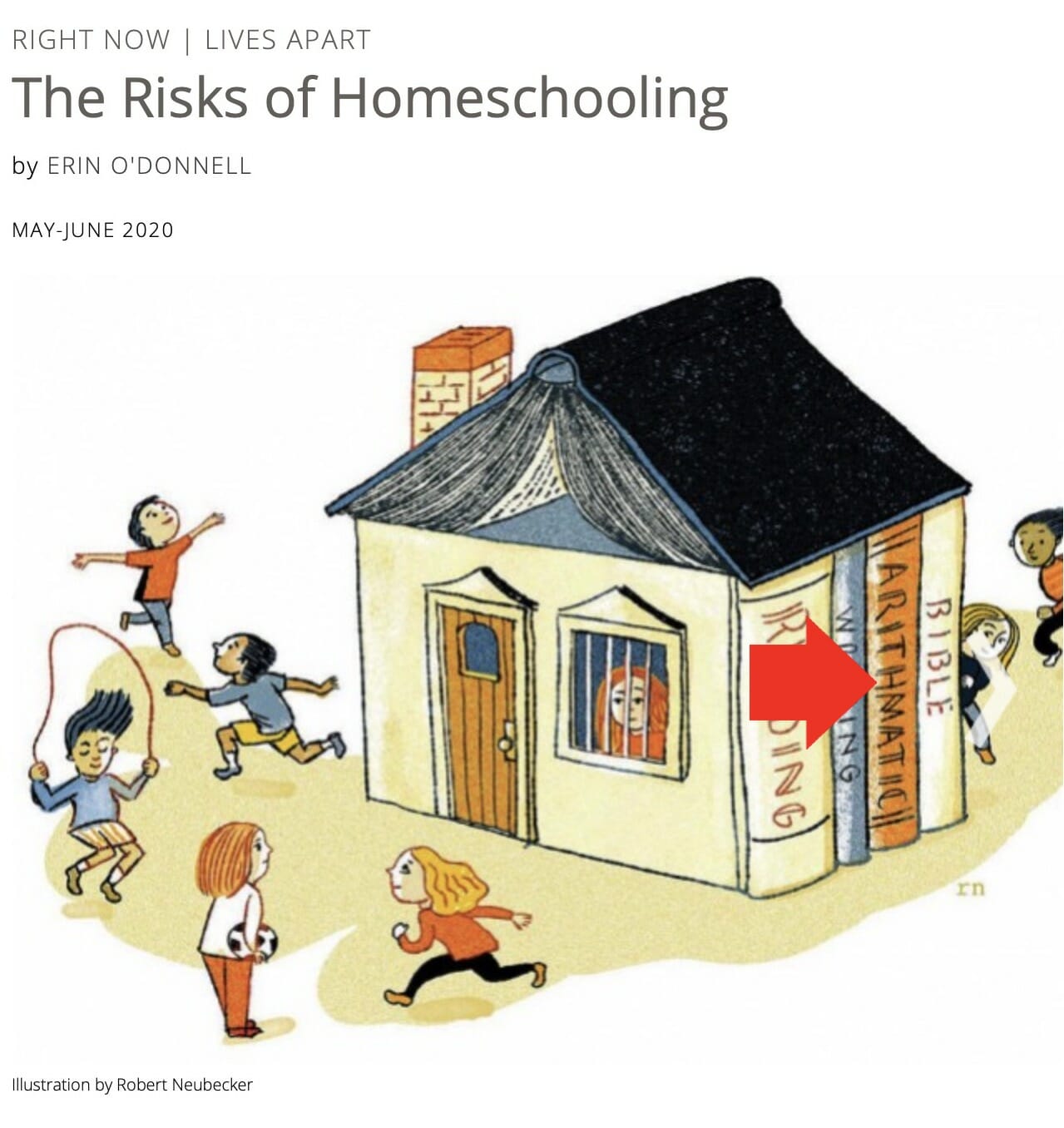 Reading, writing and “arithmatic.” Oh, and also Bible, because as you’ll discover later in the article, it’s all those perfidious Christians who want to home-school their children. The image was corrected later on.

Anyway, the “arithmatic” didn’t really play a huge part in the article, which built up to the theory about how home schooling was affecting democratic society.

First, the article begins with Bartholet asserting “an essentially unregulated regime in the area of homeschooling.”

Yes, states have laws that make schooling compulsory, “but if you look at the legal regime governing homeschooling, there are very few requirements that parents do anything.”

“Even apparent requirements such as submitting curricula, or providing evidence that teaching and learning are taking place, she says, aren’t necessarily enforced. Only about a dozen states have rules about the level of education needed by parents who homeschool, she adds. ‘That means, effectively, that people can homeschool who’ve never gone to school themselves, who don’t read or write themselves.’ In another handful of states, parents are not required to register their children as homeschooled; they can simply keep their kids at home,” the article continues.

Even though 3 to 4 percent of children are home-schooled, according to the article, they’re never able to identify a significant contingent of these children who are simply allowed to run around the house all day, playing Nintendo Switch and eating Twinkies. That ability to back up significant points with data is a consistent problem with this article — and with Bartholet’s work.

Then there’s the fact that the government can monitor your child; if you send your kid to school at age 4 or 5, the school can act as “mandated reporters” to say if you’re abusing or neglecting your child.

“Teachers and other school personnel constitute the largest percentage of people who report to Child Protective Services,” Bartholet said. Since states don’t check home-schoolers for past reports of child abuse, a parent could “still just decide, ‘I’m going to take my kids out of school and keep them at home’” if they’d been convicted of child abuse.

You’ll notice the one statistic cited by Bartholet is that teachers call CPS a lot — which means that child abusers aren’t taking their kids out of public school en masse to home-school them so they can abuse them. Are there child abusers exploiting this loophole? If there are, again, statistics are kind of necessary here. This isn’t just a conclusion you can reach a priori.

Here’s the proof: In the memoir “Educated,” Tara Westover describes how she was in a family of Idaho survivalists who kept their kids home from school.

“Although Westover learned to read, she writes that she received no other formal education at home, but instead spent her teenage years working in her father’s scrap business, where severe injuries were common, and endured abuse by an older brother. Bartholet doesn’t see the book as an isolated case of a family that slipped through the cracks: ‘That’s what can happen under the system in effect in most of the nation.'”

This is terrible, but the evidence for this being widespread is… ?

We get to the nut of this whole thing when we find that Bartholet has recently published a paper that has found that a vast majority of home-school parents — a number as high as 90 percent — “are driven by conservative Christian beliefs, and seek to remove their children from mainstream culture.”

Bartholet claims that some of these parents are ‘extreme religious ideologues’ who question science and promote female subservience and white supremacy.”

The paper describes one (1) instance of white supremacist home schooling. In its footnotes, to prove that this is really a thing, it links to a dead Patheos page that’s part of a very balanced project titled “Leaving Fundamentalism: The Escape from Ignorance.”

The other links to a webpage called White Pride Home School which was clearly designed in 2005 and mainly lists home-school resources that aren’t specifically designed for white pride stuff.

Oh, and there’s also stuff like this: “Christian schools aren’t much better than public schools. They still teach tolerance to perverted sin. They teach racial reconciliation and they promote interracial dating and marriage. One young mother that we know was very upset because her little girl, who she has obviously trained well, came home with the news that her Christian teacher told her that unless she made a point of playing with the black boys on the playground, then she was sinning and God would not let her into Heaven.”

Clearly influential. There’s no evidence anyone’s actually used this stuff for its intended purpose, but the website is there like so many dead, content-free websites on the pre-HTML5 internet.

This is academic rigor. This is the evidence Bartholet is using to prove white nationalist influence in home schooling.

This is the most incendiary point — and to be fair, the rest of the paper is much better in that respect, if very reliant on sources that are wholly partisan and don’t even feign fairness.

But that’s not the issue. The 24-karat headline here is that there’s a small but significant movement of parents who are home-schooling their children in white supremacist ideology, yet the only evidence for this is one anecdotal story and two dodgy websites.

This is the person who wants to tell you that you should be legally stopped from home-schooling your child. Just saying.

“[Bartholet] views the absence of regulations ensuring that homeschooled children receive a meaningful education equivalent to that required in public schools as a threat to U.S. democracy. ‘From the beginning of compulsory education in this country, we have thought of the government as having some right to educate children so that they become active, productive participants in the larger society,’ she says.

“This involves in part giving children the knowledge to eventually get jobs and support themselves. ‘But it’s also important that children grow up exposed to community values, social values, democratic values, ideas about nondiscrimination and tolerance of other people’s viewpoints,’ she says, noting that European countries such as Germany ban homeschooling entirely and that countries such as France require home visits and annual tests.”

Your child needs to go to school because the government needs to tell them what to think. That’s the argument Bartholet is going with.

Now, to be fair, those are pretty good things to for your child to think. But then, if the parents are intolerant enough, it’s not as if the school can keep your child indefinitely so that they learn all those wonderful things.

We’re also assuming the role of the school is the dissemination of the official view of the state — which, depending on the kind of state we are or end up becoming, might not necessarily be this awesome. That the inherent danger never occurred to Bartholet is a sign there’s a massive disconnect here.

But then, it’s difficult to say this paper was offered in good faith. A fear-inducing claim that home schooling was actually a conduit for white supremacy turned out to be totally bogus.

Bartholet failed to identify what percentage of home-schoolers were under the yoke of a dangerous parent or parents who were either abusing them or forcing them to work in a survivalist camp. Her main problem seems to be that these children are educated in a religious manner. Extrapolating that, you could also ban religious schools. Nothing has been proven here other than aberrations.

Then, what should you expect from this? If one of the nation’s most prestigious universities wants to dunk on the quality of some stay-at-home mother’s plans to educate her own children, it pays to spellcheck everything.