What the Democrats haven’t been able to win at the ballot box or in court they now seem to be trying to misappropriate online. As many in the GOP have increasingly lamented, the right to free speech on the internet is now being replaced with the apparent right of those on the left not to be offended nor confronted with dissent.

Left-leaning technology giants like Facebook, Twitter, Apple and Google are increasingly replacing the old objective standards for censoring obscenity with new double standards that seem to be intentionally aligned with the political ideology and agenda of the Democratic party.

Case in point: a tale of two Twitter accounts. First, consider @WGBH, which represents one of Boston’s NPR radio stations — and which was not temporarily suspended despite airing a 94-second rant which seriously advocated punching President Trump during last Wednesday’s government-funded episode of Boston Public Radio.

Now, that was the day before the recent mail bomb scare as well as 3 days before a deranged Trump-hating neo-Nazi opened fire in a Pittsburgh synagogue killing eleven. Nobody on the left, either on the day that it aired or more recently, seems to have complained about this blatant and widely-broadcasted incitement of political violence.

In contrast, Twitter permanently banned @LauriLoveX, the account of suspected British hacker Lauri Love, over an apparent joke that he tweeted about punching a Nazi. Thus, Twitter appears to do more to protect Nazis and the advocacy of political violence against the duly-elected leader of the free world than it does to protect free speech.

For his part, here is what Love had to say about being banished from Twitter under such circumstances: 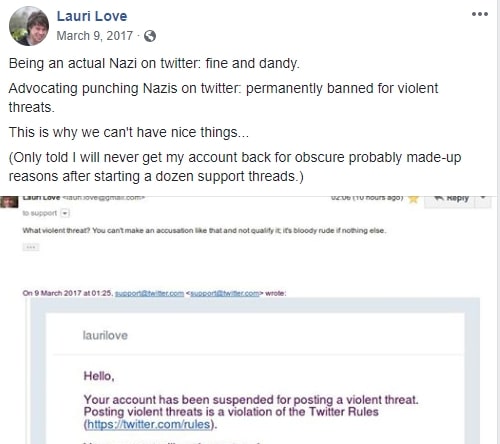 It’s also worth noting that while Apple’s iTunes was quick to ban a certain conservative competitor to NPR for far less, there has been no such action taken by the tech giant against Boston Public Radio. Apparently, Apple truly does think differently — at least when it comes to open calls for political violence and at least as long as its deranged wackos on the left calling for it.

Further, when these tech giants aren’t up to outright censorship, then subtle suppression is often their game. For example, when I wrote a piece for The Western Journal endorsing U.S. Senator Ted Cruz for reelection, that article hit 5,800 shares on Facebook, which is perfectly respectable for an opinion piece at a conservative outlet these days. Now, The Western Journal’s Alexa rank, which is the rough analog of a Nielsen rating for a website, puts it at 113th in the U.S. — making it one of the most popular sites in the country and indeed the 4th most-read national conservative publication online. But want to guess how many Facebook shares one could expect to see for a similar endorsement published at a liberal outlet with a much lower national Alexa rank of 852 and backing let’s say a certain Democratic senator who makes at-best dubious claims of Native American heritage?

Well, common sense might lead one to assume that number would be significantly lower. However, if you guessed that the endorsement of the Democrat by the lower-ranking liberal publication got over 7,800 Facebook shares — some 34 percent more than my endorsement of Ted Cruz at The Western Journal, then pat yourself on the back.

But why the big difference? Was my impassioned plea on behalf of America’s children, our health care system, and free speech as a widely-regarded political prisoner less compelling than the Boston Globe editorial board’s semi-anonymous endorsement in a much less contested race in New England?

Fortunately for my CV, that likely wasn’t the case as conservatives have long theorized that behind the scenes Facebook chooses to show conservative content to fewer people — perhaps only 20 percent as many — and fewer people equals fewer reshares from those seeing the article in their streams. It’s like compound interest, with the Democrats always getting a higher rate on their deposit, and a significant part of the reason why I’m endorsing Ted Cruz is because he understands the critical importance of this, as evidenced by his questioning of Facebook CEO Mark Zuckerberg last April.

Related:
Bob Ehrlich: Here's Why Leftists, Not Conservatives, Act Out When They Don't Get Their Way

Moreover, wouldn’t intentionally creating and maintaining such a disparity along political lines be election interference?

And perhaps just as poignant as the above example of Facebook’s possible suppression of an individual conservative article, please consider this: I’ve been very fortunate to have my story featured by Rolling Stone, Michelle Malkin, The Daily Wire, The New American, RT, Newsweek, The Huffington Post, Red State, The Daily Mail, as well as the 2 largest local news channels in the New England area and I’m eternally grateful. My last two articles at The Western Journal were shared 4,000 and 5,800 times respectively and when I put up a White House petition to #FireSessions, it brought in over 9,500 signatures.

Now, guess how many likes you’ll find at the FreeMartyG Facebook page and how many people follow @FreeMartyG on Twitter? I’ll give you a hint — neither number is anywhere near as high as one might expect given all the exposure and our persistent efforts to work with both platforms over the past 2 years.

Further, when was the last time that you heard of a conservative story going viral, and I mean #1-on-Twitter-right-now viral? Well, don’t feel bad if you can’t recall any, because other than Trump’s candidacy (and there were unique reasons for that social media success story which I’ll cover in a future article), I have to think all the way back to 2014 to come up with an example.

Now, to begin to change all this, the GOP needs to retain its control of both Houses, or preferably even to enlarge its majorities so that we can push through legislation and expand enforcement to restore the internet to the level playing field that it used to be. That means Republicans, especially those in contested House districts, must get out there on Election Day and really spike the football.

Also, it nearly goes without saying not to believe the polls and get comfortable either. Don’t fall for the trap which the Democrats set for themselves in 2016.

So, go out and vote on the 6th and send a message — not just to DC but to Silicon Valley as well. Once again, I wish that I could join you. While I can’t do that though, I can keep writing. So, together let’s rock this election, then show Facebook who’s the boss.

Martin Gottesfeld is a human rights activist facing up to 15 years under the CFAA for helping save Justina Pelletier. For more information see FreeMartyG.com.

Martin Gottesfeld
The Western Journal publishes select Op-Eds submitted by our readers. If you would like to submit an Op-Ed, fill out a submission form here: https://www.westernjournal.com/writeforus/.
To Solve the Opioid Crisis, Get Tough on the Border and with Foreign Adversaries
It's Official - the Democrats Are the Party of Open Borders
Epoch Times: Our Response to NBC News' Inappropriate Questions
Insurance Companies Impede Health Care Reforms
Kelli Ward: Trump's Victories Are Stacking Up in Arizona
See more...
Advertisement

Republicans have just added to the edge in the House with a major victory in a district currently represented by a Democrat.
By Jack Davis  December 4, 2022

Elon Musk reminded President Joe Biden that someone is way ahead of the federal government on creating an EV charging network.
By Jack Davis  December 4, 2022

Watch: Man's Proposal Gets Off to Wet Start, Dives Headlong Into Bay After Ring Bounces Off Boat Straight Into the Water

The plan for the marriage proposal was perfect, but the execution has left millions of people entertained watching the video.
By Jack Davis  December 4, 2022

A store in Oregon is seizing headlines after becoming the first store to sell psychedelic mushrooms - Except it's not quite legal yet.
By Bryan Chai  December 4, 2022

Just when you needed another Hunter Biden scandal, a new report details just how a Hunter-linked firm funneled taxpayer money to the Dems.
By C. Douglas Golden  December 4, 2022

"Re-theming such an iconic ride would erode the nostalgia that lives in Disney World and take away a little bit of the magic."
By Richard Moorhead  December 4, 2022

'Reckless Driver' Nails 2 Cars in Walmart Parking Lot, Police Shocked to Find Out Who the Culprit Is

When a dog was left alone in a Kilgore,Texas, parking lot, something very unusual happened that led police to investigate.
By Jack Davis  December 4, 2022

Actor Dead at 34, Hailed as Faithful 'Disciple of Christ'

Broadway actor Quentin Oliver Lee, perhaps best known for his role in "Phantom of the Opera," passed away at age 34.
By Bryan Chai  December 4, 2022

Reporter Confronts Apple CEO Over Sick Move Made Against China Protesters, His Response Is Telling