Hobby Lobby ran full-page ads in newspapers across the nation during the week of Christmas that celebrated the birth of Jesus and recognized him as “Christ the Lord.”

The newspaper ads feature a star above the words “It’s a boy.”

Below that is the Bible verse Luke 2:11: “Today in the town of David a savior has been born to you; He is Christ the Lord.”

Advertisement - story continues below
Trending:
Democrat Lawmaker Oblivious as China Buys Up US Farmland, Sets Stage for Foreign Monopoly on Our Own Food Production

The bottom of the ad includes this message:

“If you would like to know Jesus and Lord and Savior, visit Need Him Ministry at www.chataboutjesus.com.

“To download a free Bible for your phone, go to www.mardel.com/bible.” 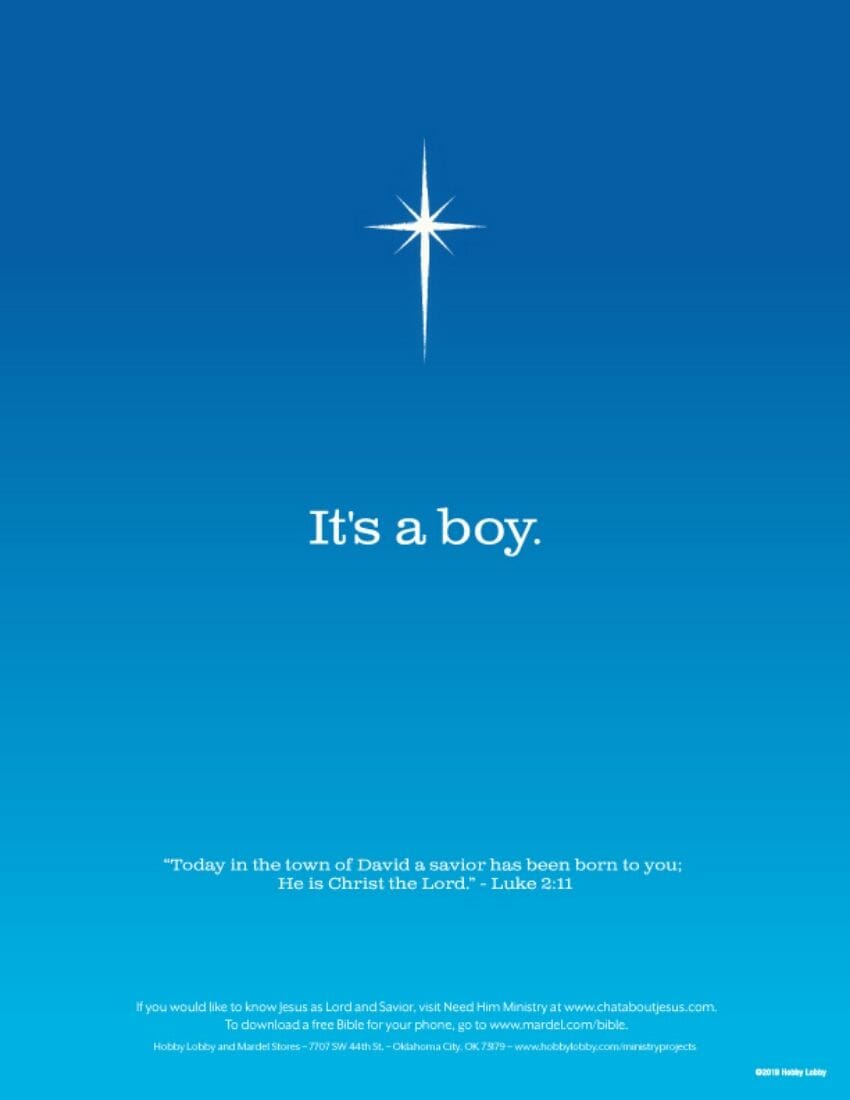 Hobby Lobby posted similar ads on its social media platforms, adding on Twitter that the birth of Christ is the “reason for the season.”

The reason for the season. “Today in the town of David a savior has been born to you; He is Christ the Lord.” – Luke 2:11https://t.co/ePL8UKhjFY pic.twitter.com/P6L4hBPHeg

The tweet included a link to a holiday message from the privately owned arts-and-crafts retailer that recounts how Hobby Lobby founder David Green was bothered by “the lack of any testimony in newspapers regarding the meaning of the holiday” amid all the other Christmas advertisements, even those of his own store.

Green published an ad that encouraged people to get to know Jesus during Christmas in 1996:

“As you celebrate this Christmas season in the warmth of family and home, may you be drawn to the Savior; He who left the beauty of Heaven on our behalf and became like us, that we might become like Him.”

Since then, the company has been publishing ads during Christmas, Easter and Independence Day to commemorate the deeper meaning of these holidays. The ads were originally published in the newspapers of towns that had a Hobby Lobby store, but the company has been able to extend the reach of its holiday messages through social media.

Related:
Hobby Lobby President's Holiday Message Is the Reminder We All Need

It elaborated on the company’s newspaper ads and dedication to sharing the Christmas message.

“This ad serves as a reminder of the true meaning of Christmas and celebrates what millions of people around the world and for centuries have considered a turning point in human history — the birth of Jesus Christ,” the statement said.

It said Hobby Lobby is continuing to partner with Need Him Ministry to “to invite anyone who would like to know Jesus as Lord and Savior to contact chataboutjesus.com.”

Hobby Lobby’s Christmas ads are a breath of fresh air in a time when the holiday’s meaning is watered down and secularized.

The arts-and-crafts retail giant deserves a lot of credit. It’s not always easy for a company to stick to its values with unflinching conviction in a world that’s often hostile to Christian views.

We recently saw this with Chick-fil-a.

The chicken fast-food chain was known for its philanthropy and Christian values, including remaining closed on Sundays.

However, it was targeted by the LGBT movement after Dan Cathy, then the company’s president, expressed support for the biblical conviction that marriage is only between a man and a woman. The company later came under fire for donating to Christian groups that activists claimed have “a record of anti-LGBTQ discrimination” — including the Salvation Army.

Despite the backlash and boycotts, Chick-fil-a was voted America’s favorite fast-food chain in 2019.

However, the company caved to the pressure in November and withdrew support from the Christian groups.

Hobby Lobby has a long history of battling similar pressure from the left without giving up, even taking their fight to the Supreme Court. In 2014, the court ruled in the Burwell v. Hobby Lobby case that the Affordable Care Act’s mandate that the company cover abortion contraceptives violated its right to religious freedom.

Hobby Lobby continues to hold to its core values, which includes prioritizing families and individual character and “honoring the Lord in all we do by operating in a manner consistent with Biblical principles.”

The company did not even include its logo within the Christmas ads. The message is strictly about the real meaning of Christmas.

Hobby Lobby evidently operates with Matthew 10:32 in mind: “So everyone who acknowledges me before men, I also will acknowledge before my Father who is in heaven.”

We will one day answer to God, not to the whims of society. Even in the face of the pressures of evil, it is vital that we focus on the Savior and follow his ways.