Trust Jill Biden’s masking advice. After all, she’s a doctor.

Not a medical doctor, mind you — she has a doctorate in education — but I’ve been reliably informed it’s misogynist if you don’t call her “doctor.” So trust her when she models proper masking behavior: 70-year-old adults can go without one, but kids had better cover their faces.

Sound backward? She’s a doctor. Are you questioning the (educational) science? (“Questioning the science” is something that power-hungry liberals always love to tar their opponents with. We’re dedicated to fighting that kind of forced conformity here at The Western Journal — and you can help us by subscribing.)

According to the Daily Caller, the first lady welcomed some second-graders from Malcolm Elementary School in Waldorf, Maryland, on Monday as she unveiled the White House’s Christmas decorations and read from her children’s book, “Don’t Forget, God Bless Our Troops.”

Dr. Seuss it wasn’t, so perhaps the White House wanted to hide the reactions on the faces of the little tykes. Whatever the case, notice the difference between Jill Biden and the children as she asks them how much money they got from the tooth fairy:

First Lady Dr. Jill Biden asks a group of kids visiting the White House how much money they get from the Tooth Fairy. pic.twitter.com/matJbvm373

Jill apparently needn’t wear a mask. The kids, however, had to cover their faces. Don’t let the dirty riff-raff breathe all over the joint, I guess.

The full remarks were carried on C-SPAN and evinced more mask hypocrisy from the adults.

At the 26-minute mark, Martin and Chris Kratt of PBS’ “Wild Kratts” come into the room wearing masks but quickly take them off. They speak maskless for a little less than four minutes before they introduce the first lady, “Dr. Jill Biden!” (What are the odds that PBS would lose federal funding if they forgot the “doctor” part?)

The book-reading begins at around the 33-minute mark. The 2012 book, which tells the story of Jill Biden’s late stepson Beau’s deployment, means exceptionally well, but sounds as if it could have been written or read by any adult present at 1600 Pennsylvania Ave. on Monday. (I’m guessing some of the kids probably could have penned it, for that matter.)

Thus, keeping the first lady’s mask off allowed the students to remind themselves they were gazing upon the first lady to distract themselves from her leaden prose. After the reading, however, she kept on going maskless — even though the Kratts, having reappeared at around the 46-minute mark, were masked up. 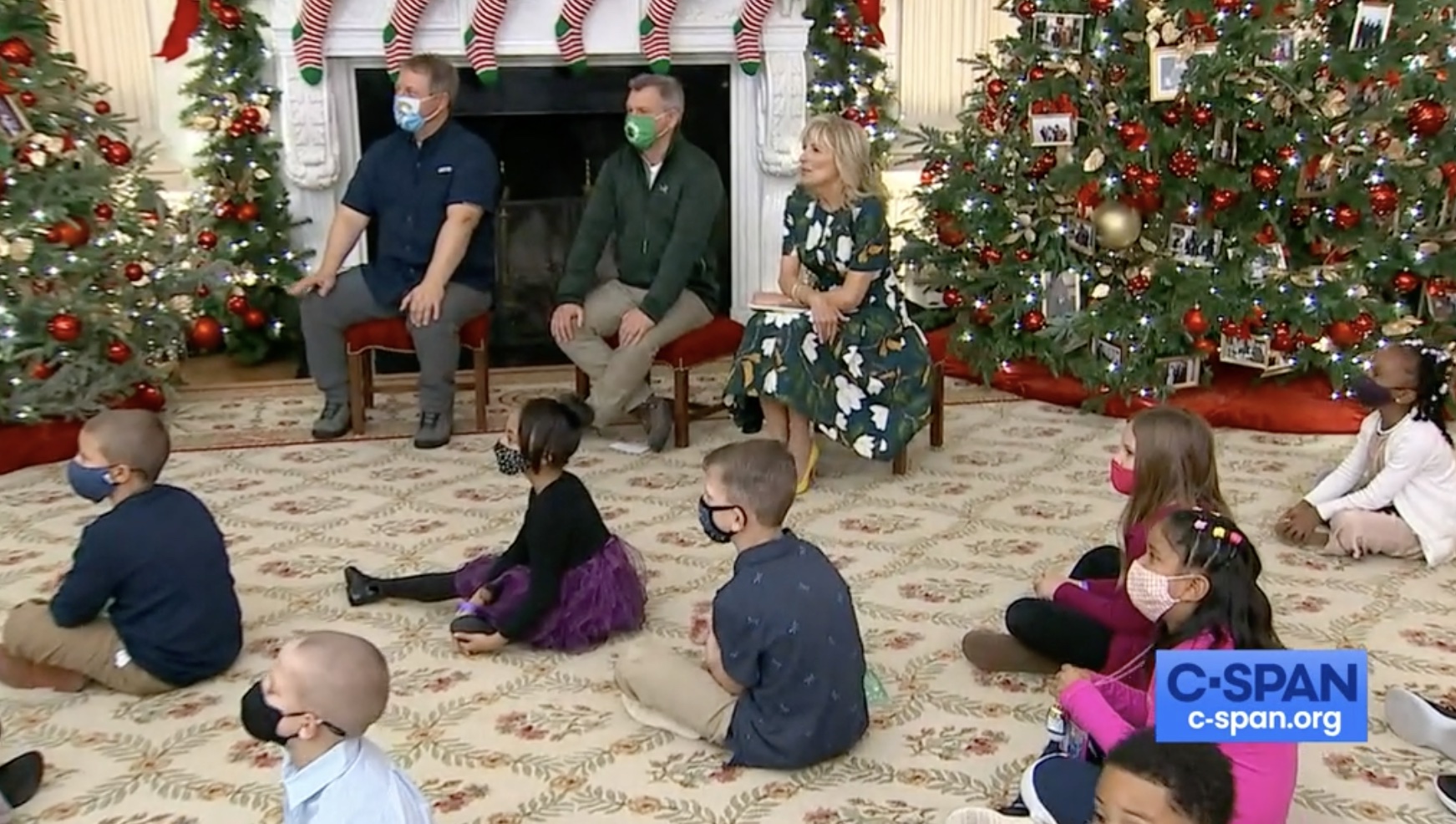 Related:
They're Baaack: Three Years Into the Pandemic, Mask Scolds Want Control Over Your Life Again

If the Kratt brothers can mask up, why can’t Jill Biden?

If one wishes to “follow the science,” for instance, consider that the first lady is exponentially more likely to die of COVID than the youngsters are. According to Centers for Disease Control and Prevention data, 175,430 Americans between the ages of 65-74 have died of the virus as of Nov. 24. Only 621 under the age of 17 have. Furthermore, the 17 kids were all tested for COVID before they came to the White House.

“Jill Biden forces little children to mask and social distance at the White House while she does neither. This is beyond stupid. This is a cruel and sick abuse to children for a Christmas celebration,” Turning Point USA’s Benny Johnson tweeted.

Jill Biden forces little children to mask and social distance at the White House while she does neither.
This is beyond stupid. This is a cruel and sick abuse to children for a Christmas celebration.

Furthermore, this comes days after President Joe Biden went maskless inside a store in Nantucket, Massachusetts, over Thanksgiving vacation. The president could be seen through a glass door with a large sign reading, “Required Face Covering.”

WATCH: Despite a large sign on the door stating “required face covering,” Biden shops maskless during his Nantucket vacation pic.twitter.com/zpmWcq7log

And to think, Whoopi Goldberg once floated the first lady as a possible pick for surgeon general. Some doctor she turned out to be.

Mexico's new law regarding American imports of corn could spell disaster for American farmers and the economy.
By Peter Partoll  January 31, 2023

The sunshine of the Sunshine State continues to enter the nooks and crannies of higher education. Zombies beware!
By Mike Landry  January 31, 2023

Millionaire Bernie Sanders Hosting Event Bashing Capitalism, But He'll Be Sure to Cash In

Bernie Sanders constantly complains about capitalism, but sees no reason why he should not continue to profit off of it himself.
By Peter Partoll  January 31, 2023
Next