Some headlines about Kathy Griffin’s tweet on Tuesday about President Donald Trump don’t quite cover the magnitude of her remarks.

The Daily News: “Kathy Griffin suggests Trump use a ‘syringe with nothing but air’ for diabetes, doesn’t back down from outcry.”

Newsweek: “Kathy Griffin Criticized for Saying Trump Should Take Syringe ‘With Nothing but Air Inside.'”

The words “violent” and “assault” are scarce among headlines.

Griffin’s comments were disgusting and vile, and she advocated for an assault of a sitting president of the United States.

It all started Tuesday when Griffin responded to a tweet from CNN’s Jim Acosta.

“Trump at diabetes event at WH: ‘I don’t use insulin. Should I be?'” the White House correspondent tweeted.

Trump at diabetes event at WH: “I don’t use insulin. Should I be?”

Griffin commented with “Syringe with nothing but air inside it would do the trick,” and then she followed with her trademark vulgar language: “F— TRUMP.”

Twitter’s terms of service stipulate that “you may not threaten violence against an individual or a group of people. We also prohibit the glorification of violence.” The company said it defines violent threats as “statements of an intent to kill or inflict serious physical harm on a specific person or group of people.”

Advertisement - story continues below
Do you think the Secret Service should question Kathy Griffin?
Yes: 99% (4193 Votes)
No: 1% (57 Votes)

What Griffin suggested clearly could kill someone.

After the Washington Examiner tweeted Wednesday evening claiming Griffin advocated “for someone to stab [President Trump] with a syringe full of air,” she confirmed the report with more of her signature vulgar language. 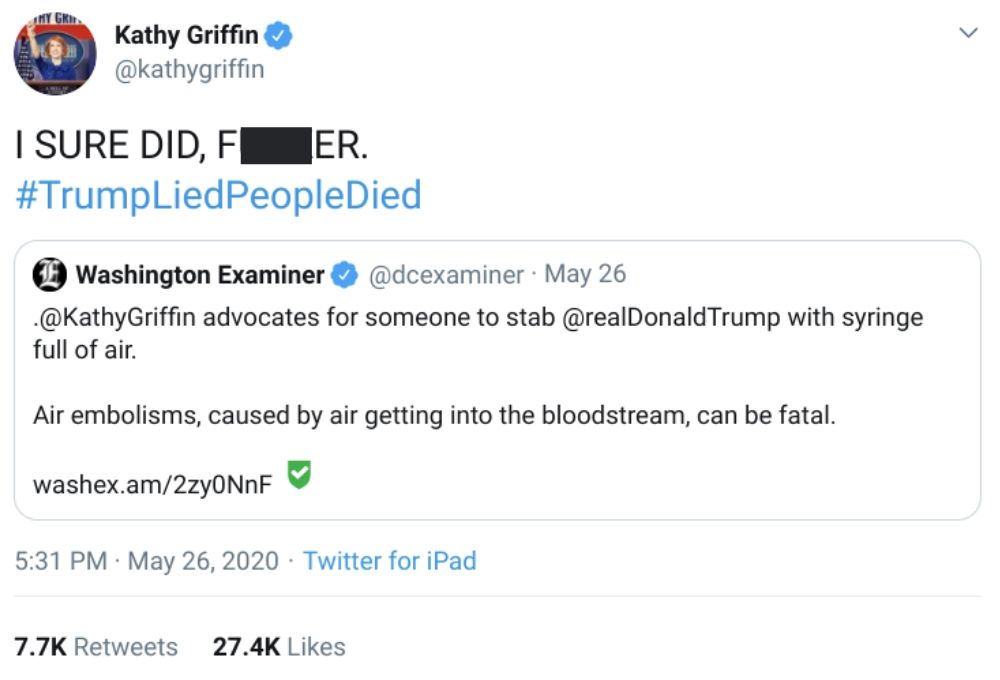 Once again, Griffin has demonstrated her hatred for our commander in chief and feels she can get away with threatening his life.

In 2017, she posted a picture of herself holding a fake severed head of Trump. That post on Twitter was deleted, but the damage to her career has lingered.

Perhaps she is trying to make herself relevant again, but this is not the way to revive her career.

She is facing well-deserved repercussions on social media.

.@KathyGriffin advocates for someone to stab @realDonaldTrump with syringe full of air.

Air embolisms, caused by air getting into the bloodstream, can be fatal.https://t.co/KudXSOyFds

Everyone needs to report @kathygriffin for threatening messages

Her response to Acosta was unacceptable, and her cavalier attitude is taunting the Secret Service to do something about it. They should at least take Griffin in for questioning after making what many consider to be a veiled threat against the president.

She has demonstrated that she has zero class.

An example has to be set to stop leftists like Griffin from getting away with their sick and juvenile remarks. The time has come to send a stern message. Calling for harm to come to anyone, let alone the leader of the free world, is never funny.

CORRECTION, May 28, 2020: When originally published, the body of this article did not support the headline’s claim that Griffin advocated for someone to assault the president. We have updated this article with an additional tweet from Kathy Griffin in which she confirmed that she advocated “for someone to stab [President Trump] with a syringe full of air.”

A proposal to create “Rush Limbaugh Day” in Missouri had cleared one legislative hurdle. As for Walter Cronkite? Maybe next year. On Thursday, the Missouri House approved legislation to honor […]

On Friday, the April jobs report came out. It was providential timing for the Biden administration, since it meant some truly horrendous employment numbers were only in the news cycle […]

Police arrested seven people after the corpse of a cult leader was found enshrined with Christmas lights in a Colorado home late last month. Amy Carlson, the 45-year-old leader of […]