“We’re doing great at the end of the first quarter, but I know there’s a long way ahead,” Kavanaugh said.

The judge thanked staffers, communications assistants and former clerks who have organized legal and political support for his nomination, joking that aides who helped prepare his Senate Judiciary Committee questionnaire probably spent “75 straight hours in chambers.”

“I’m going to do the best to live up to the confidence that the president, team and others have placed in me,” he added. 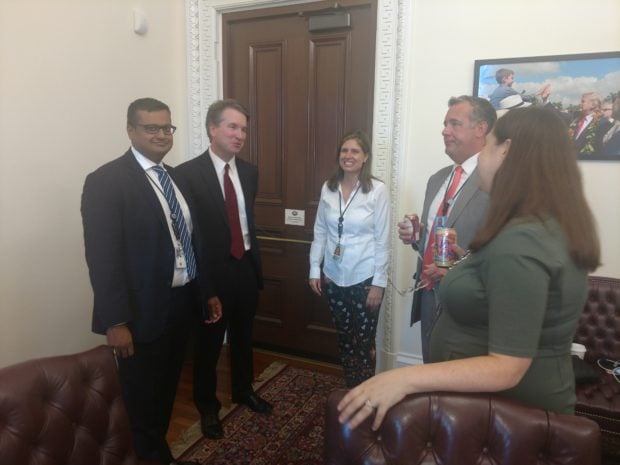 At this early stage of the process, administration officials feel the judge is strongly positioned for confirmation. Recent battleground polling in red states represented by Democratic senators shows a comfortable majority of voters favor Kavanaugh’s confirmation to the high court. Opposition to his nomination in those states, on the other hand, appears scattered and shallow.

The Daily Beast reported on July 18 that early efforts to mobilize progressive voters and resources against Kavanaugh are faltering at this juncture.

White House counsel Don McGahn, who joined Friday’s get together, said the judge has left favorable impressions with lawmakers in private meetings on Capitol Hill.

“A lot of senators are liking more of what they see as they read and review more of his opinions,” McGahn said.

Though a handful of Republican lawmakers privately expressed misgivings about Kavanaugh as the president considered potential nominees, most of the GOP caucus has publicly committed to support the judge.

GOP Sens. Susan Collins of Maine and Lisa Murkowski of Alaska, pro-choice moderates likely to cast the decisive votes on Kavanaugh’s nomination, have been similarly complimentary, though they have not publicly committed to supporting him. Speaking after his nomination, Collins nodded towards his “impressive credentials and extensive experience.”

Republican lawmakers are moving forward with the chamber’s review of Kavanaugh’s record, despite Democratic requests for a sweeping disclosure of work product he produced in the George W. Bush White House. Democratic lawmakers have asked to review any record Kavanaugh generated or handled as a Bush aide, while Republicans argue his judicial opinions, public remarks, and documents he produced as an administration lawyer are most relevant for vetting purposes.

GOP Sen. Chuck Grassley, who chairs the Senate Judiciary Committee, announced late Friday that the panel had submitted a request for documents related to Kavanaugh’s legal work in the Bush White House.

“Today, on behalf of the committee, I submitted a request for documents related to Judge Kavanaugh’s time in the White House counsel’s office,” Grassley said. “I expect the production to be the largest ever in the Senate’s consideration of a Supreme Court nominee.”

“As I have said repeatedly, I am not going to put the American taxpayers on the hook for the Senate Democrats’ fishing expedition,” he added.

In recent days, however, Democrats have said little about the ACA, instead emphasizing his views on executive power, with a view towards special counsel Robert Mueller’s investigation of Russian interference in the 2016 election.

In particular, Democrats have highlighted remarks Kavanaugh made in 1999 about the Supreme Court’s 1974 decision in the Watergate tapes case, though other commentators dispute the accuracy of their characterizations.

Kavanaugh slipped out of the gathering carrying binders and briefing books ahead of his Monday meeting with Democratic Sen. Joe Manchin of West Virginia. Manchin, who will stand for reelection this November in a state Trump swept in the 2016 election, is the first Democratic lawmaker to meet with Kavanaugh.