In any war, one of the most devastating blows to morale is an attack on the home front. In World War II, the Doolittle Raid bombed the Japanese capital of Tokyo in 1942, proving to Japanese die-hards that their country was not invincible.

During the American Civil War, Sherman’s Savannah Campaign cut deep into the heart of the Confederate States of America, ringing the death knell for Dixie.

And as War History Online explains, the same tactic happened in the American Revolutionary War.

In 1777, the war was in full swing. The British Empire was the undisputed land and naval power of the time, and the world thought that the rebellion would be put down swiftly. That’s when Captain John Paul Jones of the USS Ranger headed across the Atlantic to take the war to England’s shores. 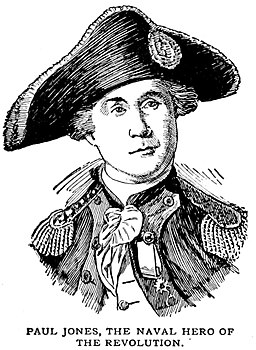 The USS Ranger was a sloop built in 1777 in Kittery, Maine. Whereas England ruled the ocean with powerful warships with rows and rows of cannon, the newly formed nation of America could only afford to produce small, fast ships. Great Britain learned the hard way that the maneuverability of small ships could make them deadly, and even the world’s most powerful navy would not able to stop them. This lesson hit harder with the Ranger than any other ship.

The Ranger’s mission was simple: Cause as much chaos for England as possible.

While crossing the Atlantic in December, the Ranger did not idly sail. She captured two British merchant ships as the first prizes of her campaign. Once safely harbored in France, Jones modified his ship. He improved the sail and outfitted the ship to look identical to a British merchant vessel. In less than two weeks after arriving off the English shore in the spring of 1778, the Ranger had captured two more ships. This was shaping up to be much more than a mere thorn in Britain’s side.

Despite the plunder that Jones and his crew enjoyed, he still had greater ambitions. Merchant ships could always be rebuilt, and gold could always be replaced. Something that is not as easily repaired is national morale, especially after losing to an underdog. So John Paul Jones crafted a plan.

He wanted to defeat a warship in its home waters.

Jones had recently discovered the location of the HMS Drake, a British Man o’ War. His original plan was a brazen daylight fight in clear view of the port of Carrickfergus. If victorious, this battle would have been devastating for the British people to witness. After an outcry from the crew about the danger of the fight, Jones settled on a night raid.

One cowardly sailor dropped anchor early into the raid, halting the momentum of the Ranger. The attack was hastily abandoned.

Days later, Jones decided on the only thing more devastating to British psyche than a naval loss would be the capture of a member of the peerage. The island of St. Mary was close, and Jones knew it was home to the Earl of Selkirk. While sailing, the Ranger stopped for battery raids. Early amphibious assaults overtook British gun placements, “spiking” the guns to render them useless.

After finally arriving at the earl’s home, they discovered that he wasn’t there. The crew of the Ranger decided to rob his house anyway, stealing as many precious goods as they could carry.

The next day, Jones saw what he wanted. The Drake was anchored close by, fooled into false security by the Ranger’s merchant disguise. The Drake finally figured out what was happening after an investigating party failed to return. The lumbering British warship sailed to meet the Americans in combat.

The Ranger’s sloop design allowed it to stay out of cannon range. John Paul Jones used a primitive bullhorn to yell insults at the pursuing English ship. In a moment of naval brilliance, Jones cut the Ranger swiftly and unleashed a full broadside cannonade onto the unprepared Drake. After continuous American fire, the HMS Drake finally surrendered.

The Drake was captured and sold in Brest, France, 14 days later. England had been humiliated by a former colony, and the entire world had seen it. America proved its strength, resolve, and determination which would lead to other world powers supporting and allying with it shortly after.

How important do you think this campaign was to early America? Let us know in the comments!

What do you think about Jones' tactics? Scroll down to comment below.