Official personalized jerseys are a boon for professional sports leagues, but they tend to be protective when it comes to the name customers can put on the back.

Fifteen years ago, back before he became best known as a vessel of serial animal cruelty, it emerged in a lawsuit that then-Atlanta Falcons quarterback Michael Vick had allegedly used the pseudonym “Ron Mexico” for seeking treatment for conditions of, ahem, an adult nature.

As The Seattle Times reported on April 15, 2005, fans who were looking to get personalized Vick jerseys with “Mexico” on the back had been turned away from the NFL’s online shop.

“The jerseys are intended for fans who want to have their name on a jersey,” league spokesman Brian McCarthy said at the time. “Obviously, this was in direct reference to recent events.

“We decided it’s inappropriate to sell jerseys with that particular name on it.”

This was still true as of 2013; ThinkProgress tested it then during the brief resurgence of “Ron Mexico” jokes in the wake of the revelation that cyber-satyriasist Anthony Weiner had engaged in unseemly acts online under the similarly hilarious pseudonym “Carlos Danger.”

In fact, during those years, there was only a brief period during which you could order a “Ron Mexico” jersey, after the NFL switched vendors and some of the prohibited words on customized jersey lists hadn’t properly transferred.

The NBA apparently doesn’t have that kind of organizational working memory. This sets off klaxons because, as we’ve previously noted, the league will allow players to select a list of 29 watered-down social justice phrases for players to put on the back of their jerseys when they restart competition later this month for reasons of league-approved self-expression.

None of them, of course, included “Free Hong Kong” or “Down With Winnie the Pooh.”

Let’s say you’re the league executive who deals with merchandising. You’ve already seen it hit the fan over the decision to limit players to 29 vague phrases on the back of their jerseys to express their commitment to social justice.

None of these phrases have to do with criticism of the iron fist with which China rules Hong Kong, particularly in the wake of the recent security law — which is telling because, before play stopped earlier this year, the league’s noxious capitulation to Beijing over Houston Rockets general manager Daryl Morey’s comments in support of Hong Kong protesters was the biggest off-court story of the year.

On top of that, we’re living in a post-lockdown, post-George Floyd environment.  You’re going to be proactive, right?

I’m on the phone with the NBA store right now. Sales rep says I can’t buy a FreeHongKong jersey, but I can buy a KillCops jersey if I want one.

Related:
Klaus Schwab Reveals Who He Really Is as He Introduces New 'Role Model' for Countries

That’s David Hookstead of The Daily Caller, noting murder of law enforcement agents was apparently hunky-dory on Monday, but not so much for showing your support for the Special Administrative Region of Hong Kong as the mainland government’s foot pushes harder on its neck.

Now the NBA appears to have reversed course on both of these — possibly as a result of a lot of bad publicity.

Here’s a screen shot of a form captured by The Western Journal at 4:27 p.m. Eastern Daylight Time on Monday, allowing the name “KillCops” to be ordered on a customized Los Angeles Lakers jersey on the NBA’s store:

And here’s an order form for a “FreeHongKong” name. See if you can spot the difference, handily made a bit easier for you by a big red arrow.

According to Hookstead’s reporting, this wasn’t, by the by, just a matter of an algorithm gone wild or a gap in prohibited words and phrases. A sales representative — a human being who one hopes is versed in what these phrases mean in context — was also willing to sign off on this.

Here is audio of the NBA store telling me I can’t buy a FreeHongKong jersey, but I can buy a KillCops jersey.

Eventually, once they realized what was happening, they claimed they couldn’t sell me anything because of high call volume and system error. pic.twitter.com/S9bdj9xgXU

Here’s the full audio. About four minutes into the transaction, the woman processing Hookstead’s requests suddenly interrupted to put him on hold.

When she returned, she claimed “system issues” meant none of the customizations Hookstead was seeking could be processed.

The woman cited “huge call volume” for the problem, but Hookstead wasn’t buying that explanation.

“Eventually, once they realized what was happening, they claimed they couldn’t sell me anything because of high call volume and system error,” Hookstead wrote.

Hookstead would later confirm you could no longer get jerseys that said either “KillCops” or “F—Police.” 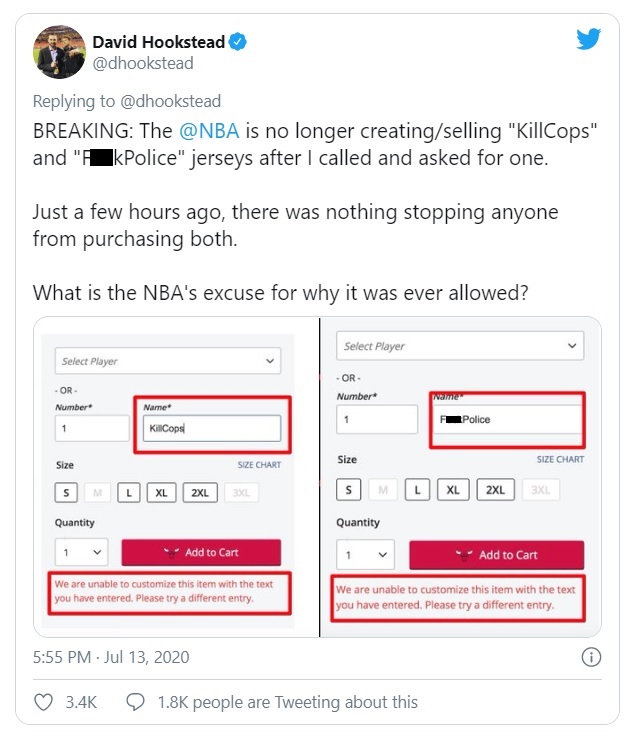 There’s something to be said for the fact neither of the slogans about police were banned. No matter how beatific the liberal media might portray the post-Floyd protests to be, they’ll always inspire the kind of cretin who would want to put “KillCops” on the back of a jersey. It’s unclear what the NBA’s criteria for gatekeeping name selection is, but they were clearly broken in a very specific way.

They’ve fixed this part, at least: According to Fox News, the league appeared to quietly change its online ordering system so, on Tuesday at any rate, you could order a “FreeHongKong” jersey.

A league representative told Fox that the league’s online store is operated by the Jacksonville, Florida-based retailer Fanatics, and that the phrase “FreeHongKong” had been “inadvertently prohibited” and that it “has now been fixed.”

“KillCops” was unacceptable on Tuesday afternoon, as was just “Kill.” Other words that began with “Kill” that could be actual names, such as “Killman” and “Killjoy” were acceptable on the store.NBA.com site.

However, numerous other disparaging references to police officers that began with the word “Cops” were also allowed.

So, considering the vagaries of the English language, it’s tough to hold the NBA responsible for not being able to foresee and forestall every conceivable offensive “name” fans might come up with.

But that only makes it more glaring that any words related to the freedom of Hong Kong — an island that is under brutal assault by the despotic Chinese communist government in Beijing — might have been “inadvertently prohibited.”

That’s all the more reason the first shouldn’t have ever been banned and the latter needed to be. That any of this could have happened in a post-Ron Mexico world speaks volumes about the kind of messages the NBA wants to preclude from being on the back of customized jerseys.

A young couple discovered secret compartments in their century-old home after receiving an odd letter from a stranger.
By Carson Choate  November 26, 2022
Next