A capsule look at the four Heisman Trophy finalists: 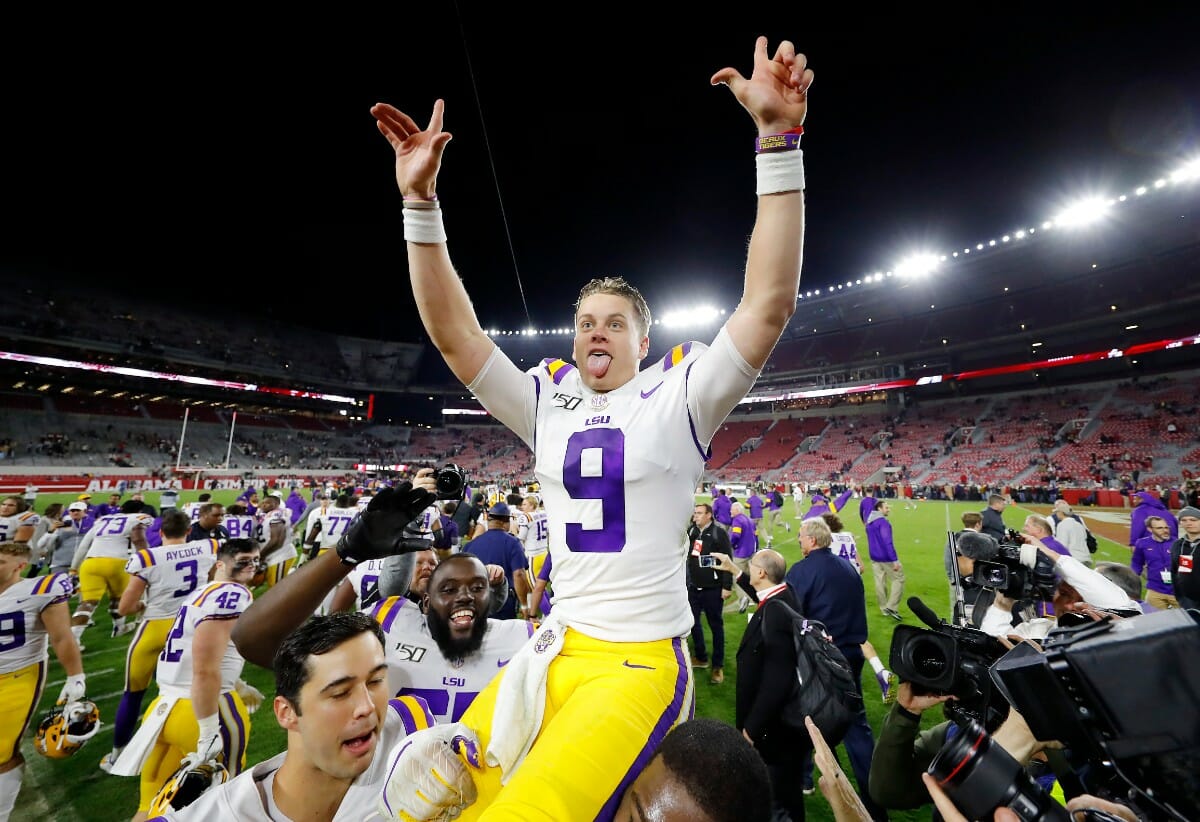 BIO: His feel-good story is well-known by now. He grew up hoping to play for Nebraska, like his father and two brothers, but the Cornhuskers never showed interest. So he started his career at Ohio State, which offered a scholarship because then-offensive coordinator Tom Herman prodded Urban Meyer.

He appeared in nine games for the Buckeyes, always in the shadows of J.T. Barrett and Dwayne Haskins Jr. When he didn’t win the starting job in the spring of 2018, and with his business degree in hand, he transferred to LSU with two years of eligibility. Now, having led LSU to the SEC championship and No. 1 seed in the College Football Playoff, he is poised to become the school’s second Heisman winner, and first since Billy Cannon in 1959.

KEY STATS: His 4,715 passing yards and nation-leading 48 touchdown passes are Southeastern Conference records. He has had five TD passes in a game three times and has thrown for 300 yards or more in a school-record seven straight games. He is the most accurate passer in the country, at 77.9 percent, and has thrown just six interceptions.

BEST GAME: He stamped himself the Heisman front-runner with his performance against Alabama in November. On the biggest possible regular-season stage — LSU was No. 1, Alabama No. 2 — he completed 31 of 39 passes for 393 yards and three touchdowns with no interceptions in the 46-41 win that snapped the Tigers’ eight-game skid in the series.

BEFORE COLLEGE: A four-star recruit by 247Sports, Burrow quarterbacked Athens (Ohio) High School to three straight state playoff appearances and to each of the school’s seven all-time playoff wins. Burrow was Ohio Mr. Football in 2014 after throwing for nearly 4,500 yards with 63 touchdowns and two interceptions.

DRAFT STOCK: He has gone from being regarded as a middle-rounder at the start of the season to possible No. 1 overall pick. His extremely high football IQ, toughness and underdog mentality make up for arm strength that, by NFL standards, is not considered elite.

THE SKINNY: No one could have predicted his incredible rise. He was good enough, not great, in his first year as the Tigers’ starter. Enter Joe Brady, hired as passing game coordinator in January after two years with the New Orleans Saints.

Brady, who this week won the Broyles Award as the nation’s top assistant, and offensive coordinator Steve Ensminger added run-pass options to the spread offense. Surrounded by high-grade talent, Burrow has done nothing but flourish. 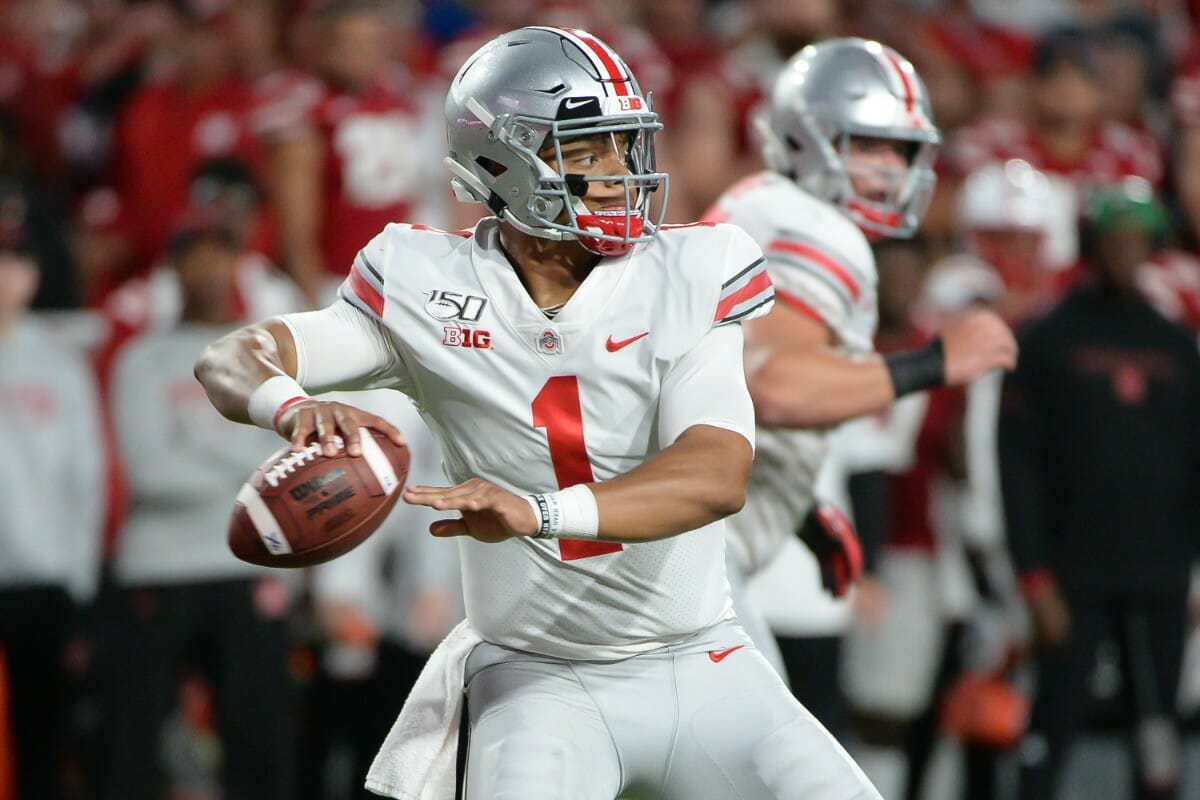 BIO: Fields was one of the most highly recruited players in the nation two years ago, so high expectations always follow him. He has exceeded them at Ohio State after spending his freshman year at Georgia.

Not excited about the prospect of sitting behind Jake Fromm another season, he knew he would have a chance to play at Ohio State with Dwayne Haskins Jr. heading to the NFL after last season. He was named the Associated Press Big Ten offensive player of the year and led the 13-0 Buckeyes to a conference championship and No. 2 seed in the College Football Playoff.

KEY STATS: Nothing stands out more than his 40 touchdown passes against just one interception, by far the best ratio in the nation. He has accounted for 50 touchdowns, four shy of the Big Ten record Haskins set last year. His total-offense average of 263.4 yards per game ranks first in the conference.

BEST GAME: Fields passed for 300 yards for the second time and threw a career-high-tying four touchdowns as the Buckeyes hammered then-No. 10 Michigan 56-27 on the road. His signature play of the season came in the third quarter after he gingerly walked off the field to get his left knee evaluated in the medical tent. He returned to the game, and on his first snap, he scrambled and threw a 30-yard touchdown pass to Garrett Wilson.

BEFORE COLLEGE: A consensus five-star recruit in 2018, he was ranked as the No. 1 dual-threat quarterback prospect and No. 2 player overall. He was the MVP of the 2017 Elite 11 quarterback competition.

He accounted for 69 touchdowns and 6,283 yards of total offense at Harrison High in Kennesaw, Georgia, and was named the 2018 Mr. Georgia Football. He also played shortstop and second base for his high school baseball team and was considered a pro prospect in that sport.

DRAFT STOCK: Fields isn’t eligible to be drafted until 2021, and the argument already has started over whether he or Clemson’s Trevor Lawrence will be the first quarterback taken.

THE SKINNY: Fields’ success is no surprise given his pedigree coming out of high school. He landed in a perfect spot. It was apparent last spring Fields would win the starting job, and he has shown remarkable consistency for a relatively young player.

He has completed better than 70 percent of his passes in six games, improved throwing the deep ball as the season progressed and proved dangerous as a runner when plays break down. If he doesn’t win the Heisman on Saturday, look for him to be back in New York this time next year. 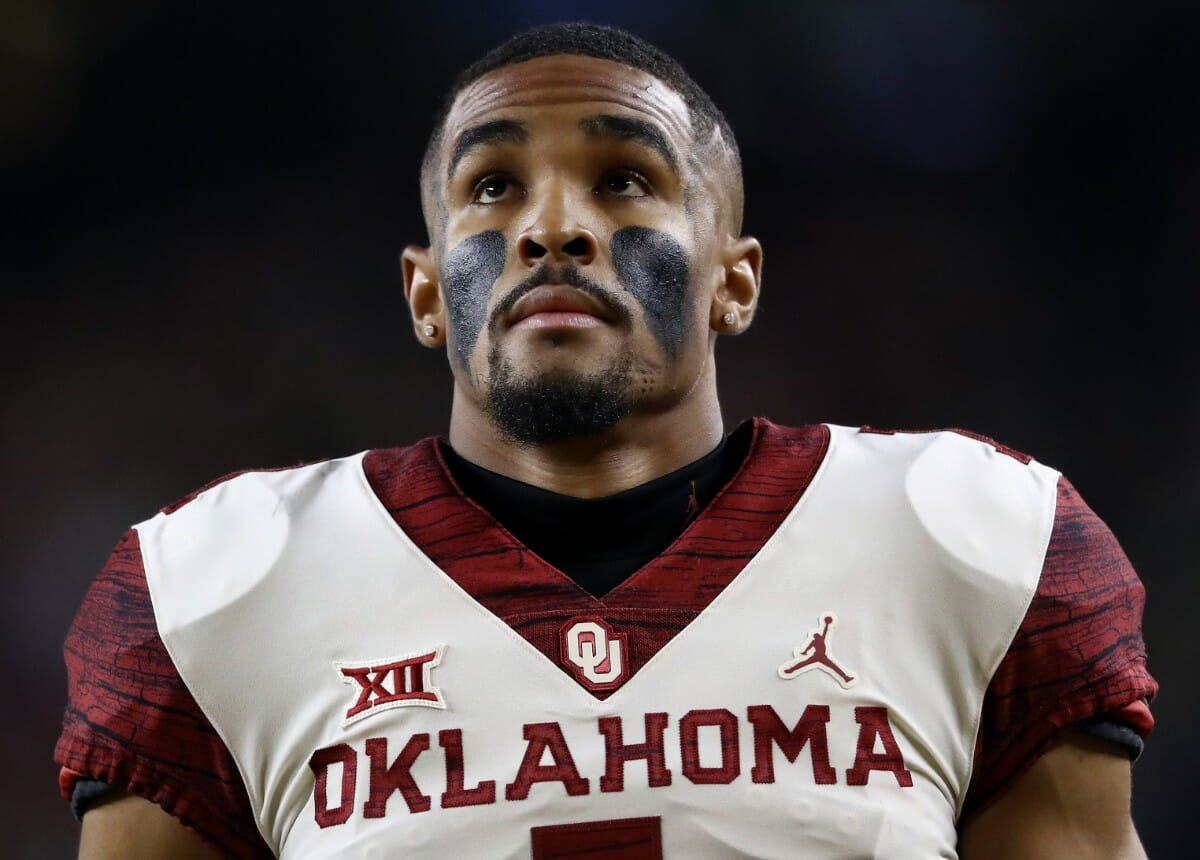 BIO: Hurts quarterbacked Alabama to national championship games as a freshman and sophomore. He was ineffective against Clemson in the second of those games. He was benched after halftime and watched Tua Tagovailoa lead the Crimson Tide to the title.

Hurts was relegated to backup in 2018 but helped the Tide make it back to the title game when he replaced an injured Tagovailoa in the fourth quarter of the SEC championship game and rallied the Tide to victory. Then it was off to Oklahoma, where he has become the latest in a line of Heisman finalists.

BEST GAME: The regular-season game at Baylor, which could also have been Hurts’ worst. He fumbled and threw an interception in the first half, setting up Baylor touchdowns, and in the third quarter, he fumbled at the Bears’ 3. He then threw three of his four touchdown passes during a school-record 25-point comeback in the second half and also rushed 27 times for 114 yards in the 34-31 win that kept alive OU’s playoff hopes.

BEFORE COLLEGE: The Houston native was a consensus four-star recruit and the nation’s top-ranked dual-threat quarterback in 2016. He played at Channelview High, where his father, Averion, was his head coach. He drew offers from Alabama and three other SEC schools after passing for 2,384 yards and 26 touchdowns as a senior.

DRAFT STOCK: NFL analysts don’t agree on where Hurts fits in. He is projected anywhere from the second to fifth rounds. Lincoln Riley has coached the last two No. 1 overall picks, so it is a plus that Hurts has played a year in the OU system.

Hurts’ playmaking ability makes him an intriguing prospect, but he is still developing as a passer and he sometimes gets careless with the ball.

THE SKINNY: Hurts’ personal comeback story is right up there with the Burrow saga. At Alabama, he was the celebrated starter for two years and then the good-soldier backup for Tagovailoa. After a change of scenery, he is back on top.

His eye-popping OU debut against Houston created the momentum that has made him a Heisman finalist. He gives the Sooners a chance for a third straight Heisman winner, but it’s an outside chance. 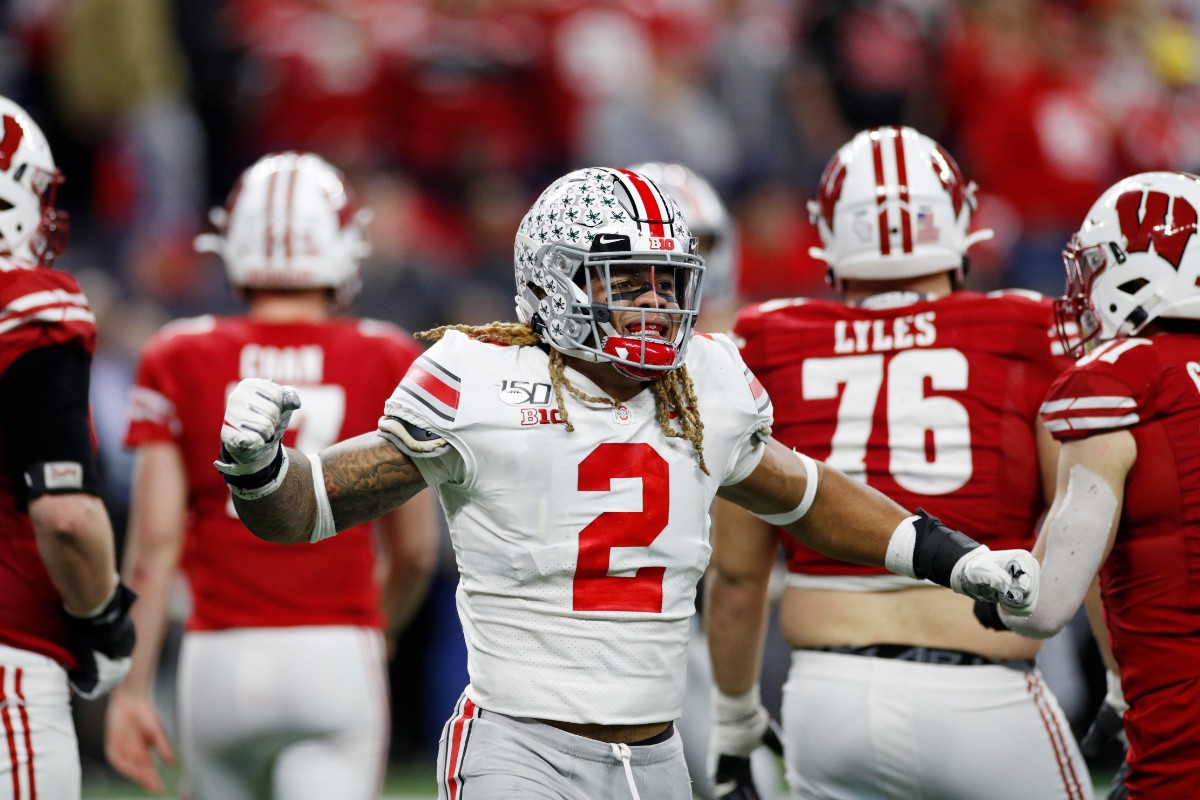 BIO: Young is arguably the best defensive lineman in college football since Nebraska’s Ndamukong Suh, a Heisman finalist in 2009. The Buckeyes have been blessed with star linemen in recent years — Joey and Nick Bosa were top-three NFL picks — but none have produced at the level of Young.

He had an 11-game sack streak dating to last season, highlighted by a four-sack game against Wisconsin in October that thrust him into the top tier of Heisman candidates. He has 30.5 sacks in three years, and his average of 1.5 per game this season is the highest since Elvis Dumervil of Louisville averaged 1.7 in 2005. He was suspended two games this season for an NCAA rules violation connected to a loan from a family friend in 2017.

KEY STATS: Young’s school-record 16.5 sacks, in 11 games, lead the nation and are the most by a Big Ten player in 21 years. He is first in the nation in tackles for loss per game (1.91) and tied for fourth with 21 tackles for loss, including 16 solo, for minus-129 yards (second-best in the country).

BEST GAME: Young was a force like never before in the Buckeyes’ 38-7 regular-season win over Wisconsin. He tied a school record with four sacks and forced two fumbles that led to Ohio State touchdowns. He finished with six tackles, all solos, and five of them were behind the line of scrimmage.

BEFORE COLLEGE: The Hyattsville, Maryland, native was a consensus five-star recruit and ranked among the top 10 players in the nation after helping DeMatha High to a state championship in 2016. He made 118 tackles and 37 tackles for loss, including 19 sacks, as a senior. He chose Ohio State over Alabama and Maryland.

DRAFT STOCK: He is in line to be the first player taken if the team drafting first — right now it’s the Cincinnati Bengals — doesn’t take a quarterback. NFL teams covet his combination of speed and power.

He is also an effective run stopper. For all he has done as a pass-rusher in college, he still has a high ceiling.

THE SKINNY: Of the 159 Heisman finalists since 1982, Young is the ninth defensive player and first since Michigan’s Jabril Peppers in 2016. The only defensive player to win college football’s top award was Michigan cornerback Charles Woodson in 1997.

Even if Young doesn’t win, he will take home plenty of hardware in the coming days. He has already won the Bronko Nagurski Trophy as the nation’s top defensive player and is a finalist for the Maxwell Award, Walter Camp Award and Chuck Bednarik Award, among others.