The campaign debuted Monday with a photo of Kaepernick and the tagline, “Believe in something. Even if it means sacrificing everything.”

The tweet from Kaepernick showing the photo caused a storm of opinions on both sides of the anthem protest issue, with many conservatives who interpreted the message as an affront to America’s military heroes threatening to boycott the company’s products.

Despite conservatives’ objections to Kaepernick — who began the national anthem protests at NFL games in 2016 — being held up as a hero, Nike presumably created its campaign with a goal of appealing to its key demographic.

However, a poll conducted by Morning Consult shows Nike might have overestimated the appeal of Kaepernick, because the poll suggests purchasing consideration for Nike is down by 10 points.

According to the poll, Nike’s favorability has dropped by 34 points, going from +69 before its announcement of Kaepernick as its new brand ambassador to +34 after the announcement.

Nike’s favorability dropped even more among younger purchasers, African Americans and others who are considered the company’s primary customers.

Before the Kaepernick campaign was announced, only 2 percent of those polled reported hearing negative sentiments about the athletic brand. After the announcement, 33 percent of Americans have heard negative things about the brand.

That negative buzz from social media and word of mouth appeared to make a dent in possible consumer trends.

Prior to the Labor Day launch of the campaign, 49 percent of Americans said they were either absolutely certain or very likely to buy Nike products. That number dropped to 39 percent following Kaepernick’s association with the brand.

Outrage at Nike’s business deal with someone considered to be disrespectful toward the national anthem, and those who serve to protect it, led to calls for a boycott. Morning Consult’s poll suggests that call might have been heard.

Of Republicans polled by Morning Consult, those likely to purchase Nike goods dropped from 51 to 28 percent after Kaepernick’s affiliation with the brand.

Morning Consult published this infographic to give a representation of the negative affect their poll shows the ad campaign will have on Nike’s future sales. You’ll note that not a single demographic surveyed showed an increased desire to purchase Nike products as a result of the campaign. 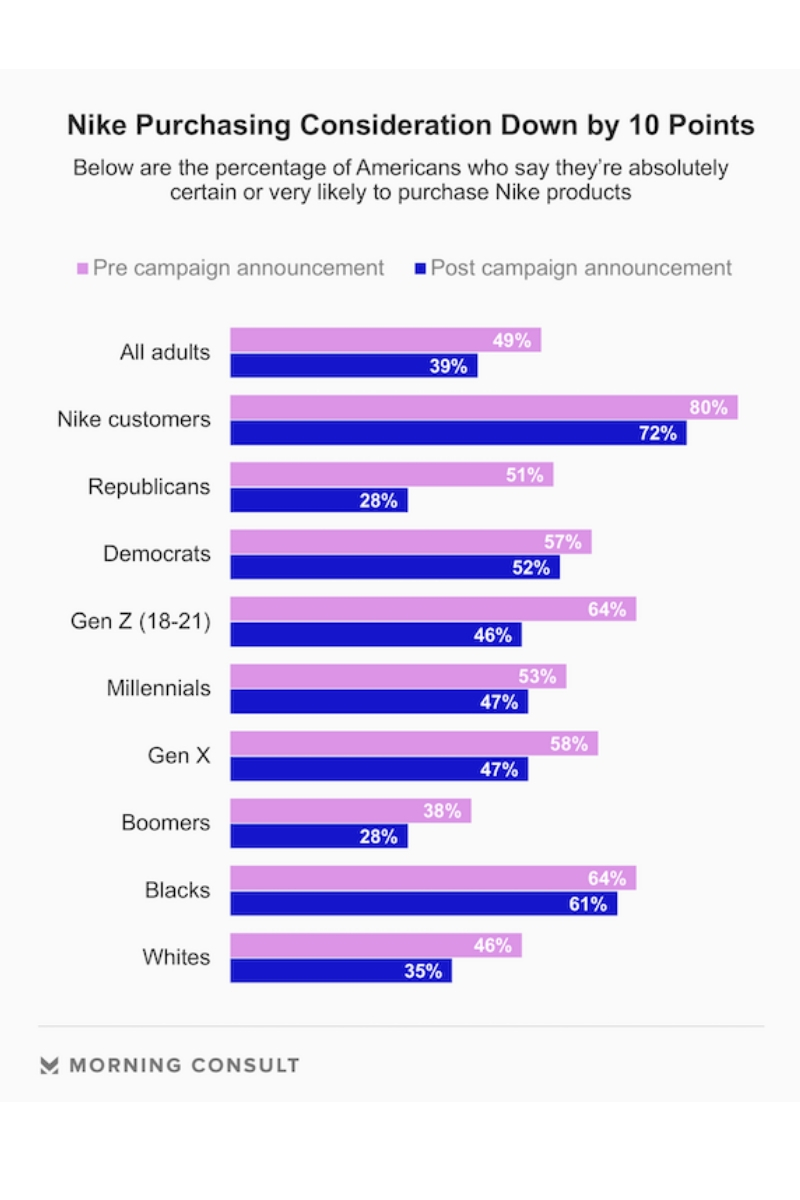 Morning Consult interviewed 1,694 U.S. adults for their thoughts about Nike before the campaign announcement from Aug. 26 to Sept. 3.

Savannah believes that it is the job of journalists to make sure the facts are the focus of every news story, and that answering the questions readers have, before they have them, is what will educate those whose voting decisions shape the future of this country.

Savannah believes that we must stay as informed as possible because when it comes to Washington "this is our circus, and those are our monkeys."

Mexican authorities have requested that a U.S. citizen be extradited to face charges in the death of a North Carolina woman.
By Carson Choate  November 26, 2022

Canada 'Freedom Convoy' Was Shut Down By Trudeau, But Now We Know Who Was Putting Pressure on Him

Freedom lovers everywhere were sickened when Canada's Trudeau shut down the Freedom Truckers, but now we find even worse news.
By Warner Todd Huston  November 26, 2022
Next