In her short bio blurb for an opinion piece in Sunday’s New York Times, Margaret Renkl is described as a “Contributing Opinion Writer based in Nashville who covers flora, fauna, politics and culture in the American South.” I must admit that I’ve not read her opinions on flora, but on every other one of these things, she’s managed to be ludicrous.

Renkl first came to my attention shortly after President Joe Biden’s inauguration when she wrote a piece titled “A Dog’s Place Is at the White House.” This was yet another feature that purported to be about the new president’s German shepherds but was really about how former President Donald Trump didn’t own a pet of any kind.

If you didn’t stumble across any of these Trump-othering pieces using Biden’s pets as a theme set against the man he was replacing, you were either lucky or should consider reading more — but Renkl’s piece was conspicuously bad, even by the standards of the genre.

“If we are wise, our country, too, will remember the pain of the wrecking-ball presidency we barely survived. We will remember what it cost us in civic trust, in the connection of community, in human lives. But if we are lucky, we will also move into the future with hope in what the new White House dogs represent,” Renkl wrote in a piece that probably inspired less laughter in your average New York Times reader than it did in this one.

It also gave me a bit of fodder to use against The Times a few weeks later when I noted Gotham’s paper of record devoted 958 words to Renkl’s fawning on Biden’s dogs but only 428 words to coverage of Biden’s dog Major biting a White House employee for the second time in the two months.

So that covered both fauna and politics. On Sunday, she hit culture and politics in a piece with a more serious tone: “We Were Called to Sacrifice as a Nation. We Didn’t Answer.”

How didn’t we answer? Among the reasons, we chose to socially gather despite the threat of COVID-19 — but we just didn’t listen.

“For most of us,” she wrote, “Memorial Day simply marks the unofficial beginning of summer — a chance to cookout, to go swimming, or to sit with friends in the shade of the long, long afternoon, waiting for lightning bugs to come out.”

It’s a time when we gathered as groups, even as 60 percent of Americans 12 and over have received at least one shot of vaccine as of Tuesday and cases are at their lowest level since June 2020.

In a convoluted piece that seemed to suggest parallels between those cookouts, the Vietnam War, people not wearing masks, those who continued to meet socially before Memorial Day and those who will this year — along with a heavy dose of philosopher William James’ theories about a “moral equivalent of war,” because why not? — Renkl blamed conservatives for not doing as we were told.

And why did we do it? Trump, of course.

“Lied to by the president of the United States and egged on by craven commentators, many Americans staunchly refused to give up social gatherings, no matter that staying home was the best way to keep the virus from spreading,” Renkl wrote.

“They refused to wear masks, and they mocked and harassed people who did. Some are, even now, rejecting a vaccine that could keep the virus from mutating into so many variants that there will be no hope of containing it. And they have done it all, they insist, because they are patriots.”

So no masks. Continuing to gather. Lack of vaccination. The potential for COVID-19 mutation. This is something Margaret Renkl won’t put up with. Unless… 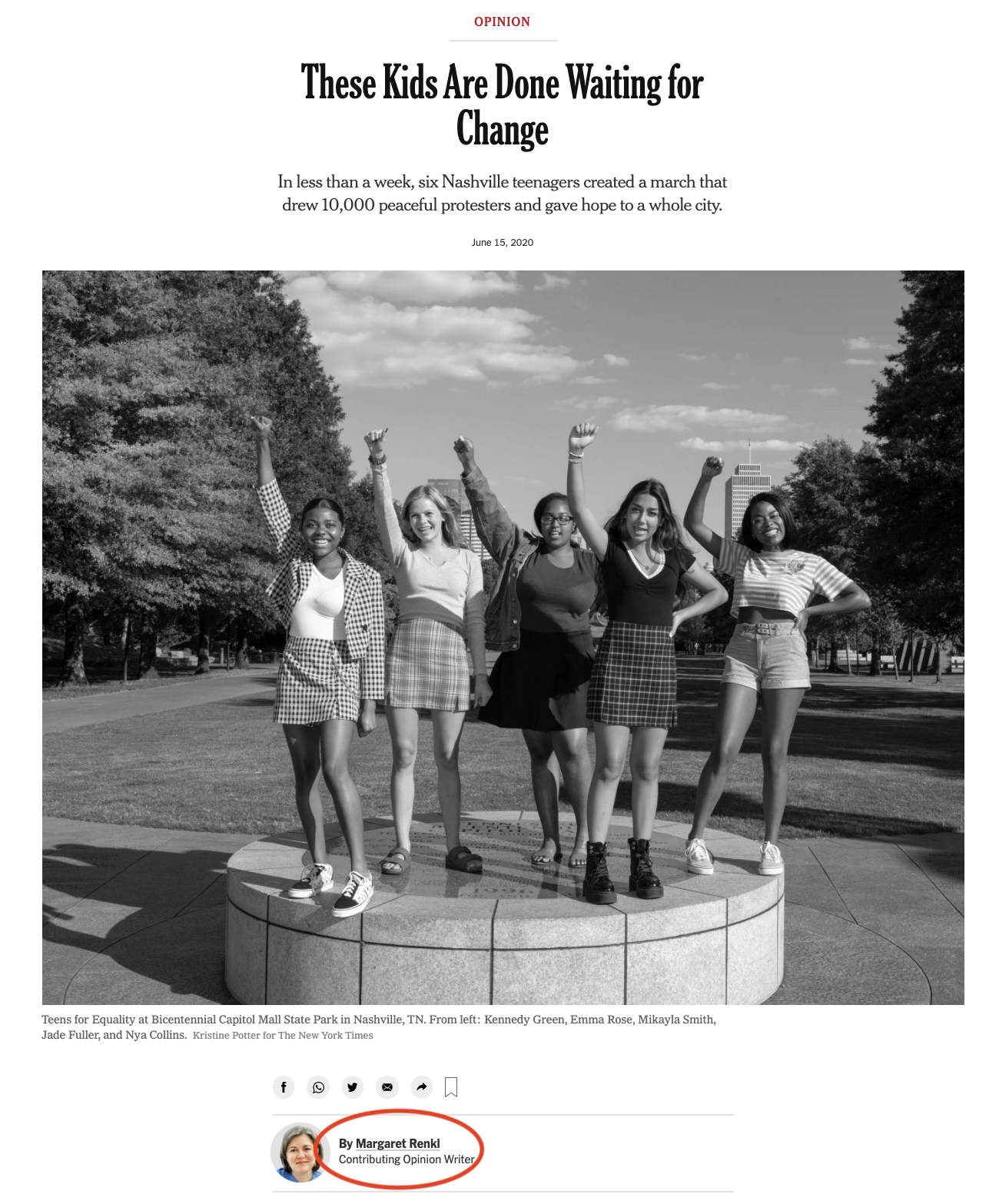 “These Kids Are Done Waiting for Change: In less than a week, six Nashville teenagers created a march that drew 10,000 peaceful protesters and gave hope to a whole city.”

That’s one of Renkl’s pieces from June 2020 in which she praised a protest that drew mass crowds who chanted “Black lives matter,” “No justice, no peace” and “Not one more.”

At the top of the piece is a photo of the six teenagers behind Teens for Equality — all without masks.

“As teens, we are desensitized to death because we see videos of black people being killed in broad daylight circulating on social media platforms,” 15-year-old organizer Zee Thomas said in a speech that began the march. “As teens, we feel like we cannot make a difference in this world, but we must.”

“They already have,” Renkl wrote. “The march they organized — with advice from the local chapter of Black Lives Matter — was one of the largest protests against white supremacy in Nashville history.

“Mayor John Cooper has responded to the protests by announcing that Nashville police officers will begin wearing body cameras next month. The cameras have been long planned and also long delayed, despite strong public support amid an increasingly frayed relationship between the police department and many of the communities they serve.

“When these Teens for Equality look around them, what they see is the strength in their numbers and the power of their own voices.”

In that piece, there wasn’t a single use of the nouns “coronavirus,” “pandemic,” “COVID-19” or “masks.” It’s as if they didn’t exist — and there certainly wasn’t any concern given to whether the protests were going to be a vector for virus-spreading.

That article was a lot more straightforward about praising the idealism of young Black Lives Matter protesters. It certainly wasn’t as labyrinthine as Renkl’s Memorial Day piece — which read as if some put-upon editor slammed the MacBook shut at half-past midnight on Sunday, loudly declared he was done and just decided to let Renkl’s article run as it was.

I think it condemned those who socially gathered this Memorial Day, but there are a lot of sentiments I have about Renkl’s essay that begin with the words “I think.”

I’m certain those paragraphs about Trump supporters, masks, vaccines and gatherings were the crux of the piece, and the implication was that those who gathered on the occasion — especially those “patriots” — were being irresponsible. The rest of her argument was a mess.

A brief linear overview: Renkl grew up in the Vietnam era, while “[y]oung men of my father’s generation grew up during wartime and generally expected to serve when their turn came. No generation since has felt the same way.” (There are some choice words to be lobbed there about Canada and a time when the word “amnesty” had a different political context, but never mind.)

Renkl didn’t glorify war, but she found it tawdry that so many Americans find Memorial Day an excuse for a cookout when families have lost loved ones. Then she transitioned, whiplash-like, into William James, who “made the case for a form of compulsory national service that would instill the same virtues as those so often ascribed to military service.”

This is why, she said, “the need for some nonmartial way to nurture communitarian qualities is more urgent now than ever.”

“We have lately been reminded of the absolute necessity for Americans to be motivated by warm fellow feeling across divides of region, race, class, politics, religion, age, gender or ability; to cultivate a sense of common purpose; to make sacrifices for the sake of others. And that reminder came in the form of watching what happens when such qualities are absent, even anathema, in whole regions of the country,” Renkl wrote.

And then came the paragraph about those who refused to give up social gatherings despite the threat of COVID spread. The bad ones, I mean, not the good ones who were doing it for a cause.

“But for those ‘patriots,’ we might be able now to imagine the proclamation of another kind of Memorial Day, one that commemorates not self-sacrifice in war but the lives we saved by joining together to serve the same cause,” Renkl concluded. “If Vietnam exploded the unquestioned commitment to national service, the coronavirus pandemic should have been the very thing to bring it back.

“That it did exactly the opposite tells us something about who we are as human beings, and who we are as a nation. There is more to mourn today than I ever understood before.”

I mourn the fact there are 7.8 million subscribers to The New York Times, people who might read this without understanding Renkl’s ethics are entirely situational. It isn’t about case numbers or deaths. It’s all about control.

In one article, she ascribed the spread of COVID-19 to “patriots” (read: conservatives) without a shred of evidence that political affiliation had anything to do with it. One of the reasons she cited was that they continued to gather socially.

Less than a year earlier, she lionized Black Lives Matter protesters without any regard to whether mass public protests would spread the disease.

On fauna, politics and culture, Renkl is deliberately contradictory. As for the final count, I have not read her writings on flora and they will remain unread. I tend a garden and do not wish it to die.

Peter Doocy had Biden press secretary Karine Jean-Pierre on her back foot with a question about the White House's use of Twitter.
By Richard Moorhead  December 3, 2022

A delivery truck driver has been charged in the murder of a 7-year-old Texas girl who had gone missing on Wednesday.
By Jack Davis  December 3, 2022

Al Roker Readmitted to Hospital Following Complications From Blood Clots: 'Doctors Are Keeping a Close Eye on Him'

Well-known weatherman Al Roker has been re-hospitalized as he fights multiple blood clots throughout his body. Many fans have wished him well.
By Carson Choate  December 3, 2022

GOP Sen. Rand Paul says he is not through with Dr. Anthony Fauci yet until the full truth about Fauci's Cina connection is laid bare.
By Jack Davis  December 3, 2022

As Elon Musk Suspended Kanye West from Twitter, He Sent Him a Powerful Prayer

Instead of throwing West to the wolves or letting him off easy, Elon Musk chose a different tactic to deal with the problematic rap star.
By C. Douglas Golden  December 3, 2022

By 2022, a whopping 99.73 percent of Twitter employee contributions went to Democrats. They clearly had their thumbs on the scale for Biden.
By Elizabeth Stauffer  December 3, 2022
Next