One year ago, former “Empire” actor Jussie Smollett apparently decided what his career really needed was a fake hate crime committed against him.

We’ve never been quite clear on the “why” behind this,  nor am I entirely certain it’s important, but that’s what he decided needed to be done.

So, he allegedly hired a duo of inept, Keystone Kops-ish brothers of Nigerian heritage to pretend to be white supporters of President Donald Trump. These white Trump supporters would assault him, scream “This is MAGA country” and then run off into a chilly Chicago morn, leaving Smollett to contact the police and reap the rewards.

There were problems with this story from the beginning, back on Jan. 29, 2019, but that didn’t stop famous people from believing it. This was mostly because the media reported it almost uncritically — until, that is, additional details started emerging.

Details like, oh, that Smollett had told different stories to both the media and the police. That he wouldn’t turn over phone records that would corroborate his story. That he couldn’t explain why the heck a duo of violent conservatives would be hanging around in the Windy City at 2 a.m. ready to attack the third- or fourth-most recognizable person on “Empire” because he was a gay black man and this was how they kept Chicago “MAGA country.”

Those inconsistencies should have bothered every news outlet from the beginning. Instead, it wasn’t just Smollett that ended up looking bad — everyone did.

As the case is about to mark its first anniversary, it’s interesting to look back at CNN’s report on the day the “attack” happened. You can see it in its original form, in fact, because CNN’s done absolutely nothing to take it down or correct it. 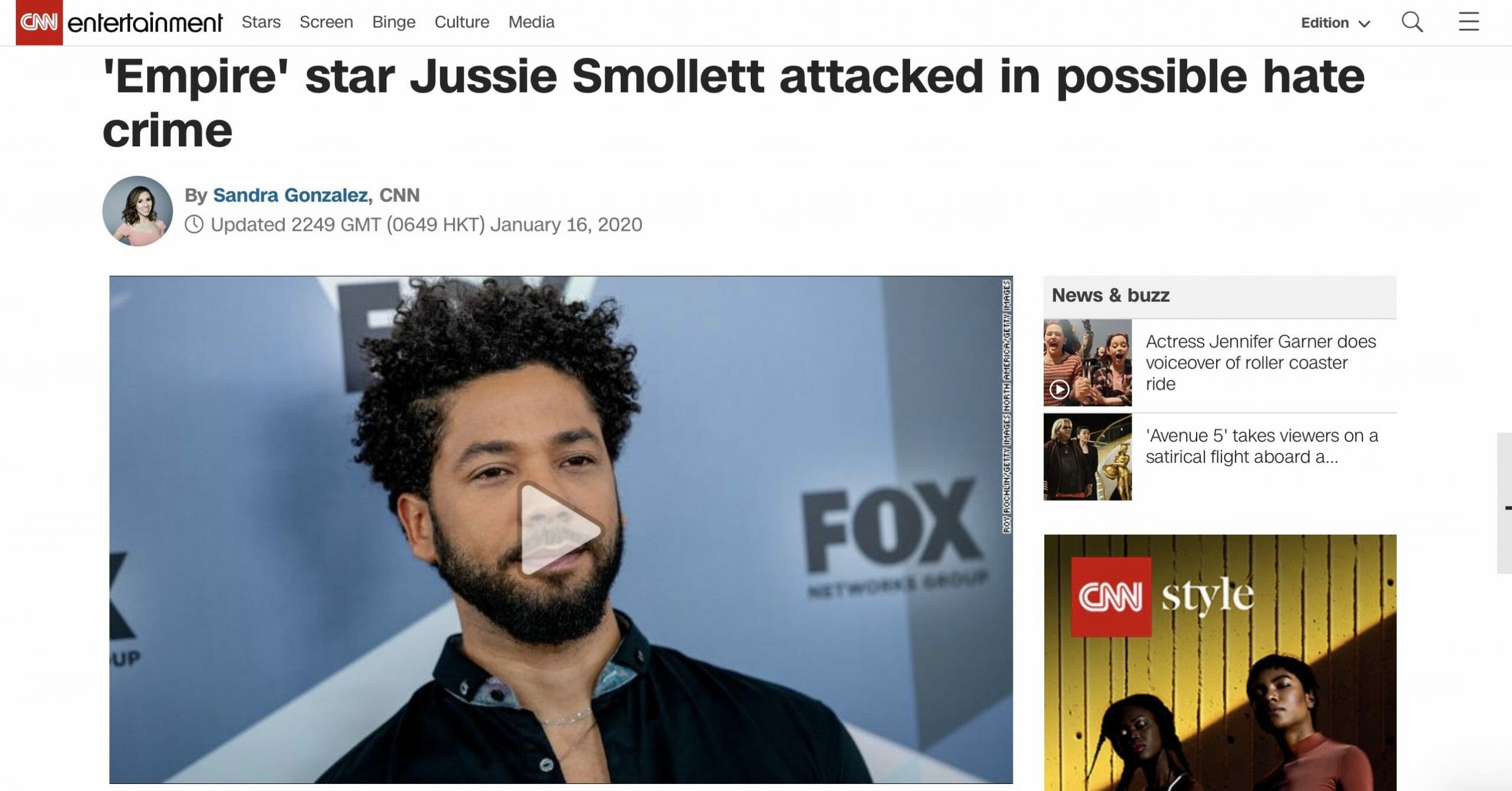 That tone continued in the article itself.

“‘Empire’ actor Jussie Smollett was attacked in the early morning hours on Tuesday in what Chicago police are calling a possible hate crime,” it read.

“Smollett was attacked by two people who were ‘yelling out racial and homophobic slurs’ and ‘poured an unknown chemical substance on the victim,’ police said.

“One of Smollett’s alleged attackers also put a rope around his neck, according to police. Both fled the scene.

“Smollett took himself to Northwestern Hospital and ‘is in good condition,’ authorities said.”

Related:
80-Year-Old Man Getting Beaten by Home Invaders Reaches for His Firearm and Instantly Turns the Tables

Now granted, this is based on what police said, but there’s a certain degree of assuredness here: Something did happen. No one seemed to guess that something was a strange hoax perpetrated to focus attention on Smollett, but there you go.

Perhaps this statement by Chicago police spokesman Anthony Guglielmi should have raised a bit more alarm at the time, though.

“The Streeterville neighborhood where the alleged attack occurred has a very high density of city and private surveillance cameras. As of 10 p.m. Tuesday, detectives canvassed and reviewed hundreds of hours of video and have now expanded the search area along the Chicago riverfront hoping to find video to be able to release a public description of the offenders,” Guglielmi said.

“Unfortunately, thus far we have not found any helpful information on a suspect or a suspect’s vehicle to be able to share.”

Well, that didn’t set off any klaxons of alarm and here we are, one year later, with Smollett possibly facing more trouble.

Even though the actor supposedly got off for the crime — remember, he spent a few hours doing community service and forfeited his $10,000 bond for charges of filing a false police report, all thanks to State’s Attorney Kim Foxx — he’s still in what the kids like to call a pickle.

As Kyle Smith notes over at National Review, “outrage about Smollett’s lies caused the appointment of a special prosecutor, Dan Webb. So the story lives on. Smollett has not been nailed, and Chicago wants him nailed. He will get nailed. The postman always rings twice.”

As Smith wrote, Webb has already obtained a warrant from a judge to search Smollett’s Google accounts, “not just emails but also drafted and deleted messages; any files in their Google Drive cloud storage services; any Google Voice texts, calls and contacts; search and web browsing history; and location data.”

“Ouch. There is no chance that all of this information will back up Smollett’s made-for-TV claims about men roaming around looking for gay television actors to beat up while chanting MAGA slogans,” Smith wrote on Jan. 13.

No, probably not. Those claims shouldn’t have been so widely bought at the beginning of the investigation, however. I don’t think it’s just hindsight that makes Smollett’s story sound particularly foul. Looking through CNN’s original piece, you get a sense of wonderment that any of us bought this. Perhaps it’s difficult to remember the outpouring of love for Smollett from celebrities and politicians.

The reported hate attack on my friend and brother, actor Jussie Smollett is despicable and outrageous. The guilty must face the maximum.

One year later, it’s clear that if Smollett’s claims weren’t a visibility-boosting hoax designed to play on liberal confirmation bias, they represent one of the most improbable crimes ever committed. I doubt there’s a single person at CNN who would stand behind by the substance of this story now, and the network shouldn’t have countenanced the tone back then. Either way, it remains up and uncorrected.

(In fairness, the story does have an “Editor’s Note” at its top now,  stating “Read update here.” But the headline on the update is a neutral-sounding, “The many twists and turns in the Jussie Smollett investigation.” And to say the accompanying report buries the lede would be overly charitable. It’s not what any honest reader would call a “correction.”)

CNN, it’s worth noting, has been one of the loudest voices protesting what it sees as President Trump eroding trust in the media by calling it “fake news.” Whether or not that’s appropriate, I won’t get into here. However, looking back at this story — and the fact it’s still up — I’m not quite sure CNN needs the president’s help earning that appellation.

According to a local hotel manager, this isn't the first time this has happened. Fortunately, the poor man found some help.
By Josiah Upper  February 2, 2023
Next