“If you have a problem figuring out if you’re for me or Trump, then you ain’t black.”

The plain racism radiating from Joe Biden’s comment was as disgusting as it was shocking.

Let me be as clear as humanly possible, Joe. As a black man in America, I will not be casting my vote for you — and, in fact, I will proudly be voting for the most pro-black president in my lifetime, President Donald J. Trump.

Not only is Biden’s use of “ain’t” as a way to “relate” to the African-American community condescending, but it is also reprehensible that a 77-year-old white man from Delaware who has bragged about his friendships with known segregationists is now the litmus test for whether or not a person is black.

During this past legislative session here in Arizona, it was a moving moment for me when we opened the day’s floor session with a color guard provided by the 9th and 10th Cavalry Association, the organization that honors the legacy of the Buffalo Soldiers.

The Buffalo Soldiers were African-American soldiers who served in the U.S. Cavalry at the end of the nineteenth century.

Despite facing prejudice and numerous hardships, the Buffalo Soldiers in the post-Civil War 1800s had the most Congressional Medal of Honor winners and the lowest desertion rate.

As a 21-year veteran of the U.S. Army, it warms my heart when the memory of the Buffalo Soldiers is preserved.

As an African-American, it gives me hope that such a fine example is set before young black Americans.

Do you think Joe Biden will lose some of his African-American support in light of his recent comments?
97% (884 Votes)
3% (23 Votes)

That is just one of the reasons why it is such a slap in the face when a national figure such as Joe Biden, in the year 2020, can still use the “you ain’t black” pejorative for a person of color who disagrees with his political views.

So, Mr. Biden, I am an African-American, a veteran, a state elected official and a recipient of the Bronze Star and the Meritorious Service Medal who has no difficulty choosing between you and Donald Trump in this fall’s election.

Mr. Biden, you seem to believe that you can tell people of my skin color what to think.

But what has been exposed by your disgraceful remark is your true colors. It seems that you do not have much use for black people unless they bow down to your political agenda and support your electoral ambitions.

I truly hope that this is a tipping point in African-American support for you.

The true legacy of black Americans is a powerful legacy of freedom — freedom from the physical chains of slavery to freedom of opinion, belief and the right to stand and fight for our convictions regardless of what the Democratic elite dictate.

And on Nov. 5, I will wake up knowing that I have done what is right for my country, my family, my state and my community by having voted for Donald Trump for president. 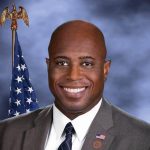