Those who bravely choose to serve their country never serve alone. In fact, soldiers’ family members are serving right alongside them, even if they aren’t stationed with them or physically on the field of battle.

Family members pray for their loved ones’ safety, they experience fear, they worry and they, too, celebrate the victories and hold on to the good times.

Family members serve. It is no easy thing to be “left behind” while your loved ones are serving in active combat. It’s like you marry the absolute love of your life and then your spouse leaves and you only see him or her infrequently for possibly years at a time. Worse yet, you know your loved one is putting his or her life in danger.

Yes, it is for a good and admirable cause, but that doesn’t make it easy.

In 2015, there was a reported total of 1,728,710 family members who served alongside their active-duty service members.

Of that number, there were 1,076,803 children and 641,639 spouses. Wherever home is, be it small-town America, the big city or a predominantly military community, chances are you know a family member of someone who serves in or has served in the armed forces.

What is a Gold Star Family?

A Gold Star Family are the immediate family members of fallen service members who died while serving in a time of conflict.

As Hope for the Warriors explains:

“A Gold Star Family can display a Gold Star Service Flag for service members who were killed or died, while serving in the Armed Forces, from causes other than dishonorable. The number of gold stars on the flag corresponds to with the number of individuals who were killed or died. A gold star is placed over the blue star on a Blue Star Service Flag so that the blue forms a border and creates GoldStar Service Flag. The U.S. Department of Defense also issues Gold Star lapel pins to immediate family members of a fallen service member of the military. These pins are worn by spouses, parents, and children of service members killed in the line of duty and contain a gold star on a purple circular background.”

As a former Marine and member of a Gold Star Family, I was just 13 years old when I opened the door after hearing a knock. Two men in military uniform were standing there before me. I had no idea what they wanted as they proceeded to ask if my mother was home. I answered yes, and they went inside and asked if I would wait outside.

That day — and the chilling scream of my mother — is forever etched in my memory. Her firstborn had made the ultimate sacrifice in Vietnam and that day, a part of my mom died as well. The next few weeks were a blur but I well remember the 21-gun salute, the casket being lowered into the ground and an officer handing my mother the flag (folded) that had draped my brother’s casket.

Our family was never the same.

Against the wishes of my mother, I served our nation and keep the memories alive of what Gold Star Families go through. A brother or sister is one thing; now being a parent, I cannot imagine the pain and loss we would feel losing our only child.

Related:
Op-Ed: Heads Ought to Roll at the Pentagon for What Happened in Background of Biden Speech

Hearing “free college” for everyone from liberals, socialists and other “politicians” (who probably never served or had that knock on their door) gave me the idea of the Eagle 1 Program for this president who genuinely cares about our veterans and Gold Star Families.

Meeting entry requirements and maintaining pre-established academic criteria, any member of the immediate family of the service member who died or is 75 percent disabled will have the entire cost of their selected college, university or trade school paid for by the federal government.

The program will have no “hidden costs” or “surprises” while registering or at the conclusion of each semester. As with the Special Operations Foundation, the family member may remain qualified through post-graduate work and completion of a Ph.D.

The Eagle 1 Program would be administered by a 501(c)(3) organization that is currently operating a similar program. The organization must show 95 percent of the funds go directly to benefit Gold Star Members. The budget from Congress for scholarships and administration would be in ten-year increments. The president would create a senior level position in the White House to oversee the Eagle 1 Program and serve as a liaison for the president to other related programs.

With this president, and his true respect and for the military and love of veterans and Gold Star Families, this may be the only chance we have to honor in a tangible way those who have suffered in the service of our great nation.

God bless each of you, the president and the U.S.A. 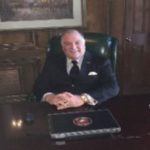 Jim Stockstill
After serving in the Marine Corps, Jim Stockstill experienced his “new birth” in Christ in 1976. He has a background in ministry, mission trips and the marketplace, holding an MBA in international finance and management. He has also served as a GOP district chairman in Louisiana and has helped elect candidates at the municipal, state and federal levels. Jim counts his wife and son as his greatest and most precious gifts.
Op-Ed: Gold Star Families Have Served Our Country, Now It's Our Turn To Serve Them
See more...
Advertisement