Like the old song, Arizona conservatives are bewitched, bothered and bewildered — and not in a good way.

As Copper State Republicans watched the 2022 election degenerate into 2020 2.0, they developed enough doubt, disbelief and downright cynicism to fill a metaphorical Grand Canyon.

Joel Barry, managing editor of The Babylon Bee, may call Ohio home, but in temporarily abandoning satire to get serious, he earned the status of honorary Arizonan by succinctly describing the current state of affairs in the 48th state: “It’s not Republican messaging. It’s not low-quality candidates. It’s not Trump. It’s not abortion. It’s mass mail-in/drop box voting. It’s as simple as that.”

Warnings of the ways in which early mail-in voting could be changed from an instrument of convenience into a tool of connivance abound, and not all of them come from the right. In fact, a decade ago, the Fourth Estate, major foundations and academia sounded the alarm, ironically with an Arizona connection.

News21 was founded by the Carnegie Corporation of New York and the Knight Foundation. Its goal is to “change the way journalism is taught in the U.S. and train a new generation of journalists capable of reshaping the news industry.” The program is headquartered at Arizona State University’s Walter Cronkite School of Journalism and Mass Communication, and it includes collaboration with NBC News through the network’s investigative blog Open Channel.

The headline from a Sept. 25, 2012, article tells you all you need to know: “The  real vote-fraud opportunity has arrived: casting your ballot by mail.” Amazingly, the article can still be found at nbcnews.com. It has not disappeared down a memory hole yet… though that could change.

What did change was the way the media reacted to vote-by-mail concerns when they were voiced again in the wake of COVID. Simply stated, the press was not impressed. Four letters best encapsulate the media’s response: Y-A-W-N.

Once News21 met the 2020 election, it was clear that any “reshaping of the news industry” was simply a reinforcement of its longtime leftward tilt.

But the 2022 election brought forth a former journalist troubled by the dismissive coverage of concerns raised during the 2020 vote count in Arizona and the Orwellian Newspeak that enshrined Democratic talking points as established facts. Kari Lake spent more than two decades at the anchor desk on KSAZ-TV, then walked away from her lucrative job and into the Republican race for governor.

Not only did she win the GOP primary in dramatic come-from-behind fashion, but she also challenged her former colleagues in journalism to embrace objectivity in campaign coverage. When they continued to dance to the Democratic tune, Lake held news conferences during which she would offer on-the-spot refresher courses and immediate critiques to a largely hostile and partisan media corps.

Those performances established Lake as a rising star in the Republican Party, and that star continued to rise, as did her pre-election poll numbers when Democratic nominee Katie Hobbs refused to debate her.

Long before that, Lake had called for Hobbs to recuse herself from any involvement in overseeing the election, citing legitimate conflict of interest concerns that should supersede Hobbs’ role as secretary of state. Hobbs also turned down that request.

That’s why most Republicans eschewed mail-in voting, opting instead to cast their votes in the traditional way on Election Day 2022. They reasoned that their personal presence at the polls might help prevent a repeat of the curious 2020 results.

Then a not-so-funny thing happened. Thirty percent of the tabulation machines malfunctioned in the county with 60 percent of the total Arizona electorate. Whether through incompetence or intentional neglect, the Maricopa County mess resulted in voter suppression of Republicans. The refusal of a state judge to grant an emergency GOP request to extend voting hours to 10 p.m. helped seal the deal.

Related:
Op-Ed: There Is a Crisis in America - Remember the Case of the Missing Trailer Full of Ballots?

Next came six days of laborious vote-counting kabuki theatre, culminating in the announcement of a narrow Hobbs victory. Lake’s reaction was succinct: “Arizonans know BS when they see it.” Look for a legal challenge ahead.

Meantime, The Babylon Bee has returned to satire. One of its recent headlines reads, “Katie Hobbs Projected to Win Arizona Governor’s Race with 108% of Precincts Reporting.”

There is truth in humor. 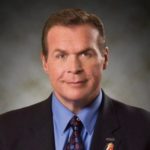 J.D. Hayworth
Former Rep. J.D. Hayworth of Arizona serves as chairman of the United States Justice Foundation Advisory Board.
Op-Ed: 'Mailing It In' Is Hazardous to the Health of Our Republic
Op-Ed: If the Senate Refuses ACB, We're Headed for Anarchy, Tyranny & Lawlessness
See more...
Advertisement