History will show that the 2020 election is a major turning point for those who care about the health of women and the unborn. Not only is the contrast stark between the two major candidates, incumbent President Donald Trump and former Vice President Joe Biden, but their promised agendas also truly make the stakes, as Biden’s slogan states, a “battle for the soul of the nation.”

Joe Biden’s days of lobbying on behalf of the unborn were over more than 40 years ago.

He completed his transformation into a pro-abortion politician when, caving to extreme abortion advocates, he denounced the popular Hyde Amendment – a measure that protects taxpayers from paying for abortions.

But eliminating Hyde is only the beginning.

Biden’s campaign and allies have already made it clear that the Biden/Harris agenda includes removing the legislative filibuster in the Senate – a radical move that could allow the most extreme pieces of legislation to pass.

Such legislation could include taxpayer funding for all abortions both domestic and foreign (in fact, his plan includes making it law that the government could only lobby in favor of abortion), the eradication of all pro-life gains in the states, the forced silencing of pro-life advocates and a plan to pack the Supreme Court with liberal ideologues.

In addition, Joe Biden has threatened to reverse a number of Donald Trump’s pro-life actions.

As vice president, he spoke favorably of China’s coercive one-child policy and as a presidential candidate, he has vowed to fully restore funding to the United Nations Population Fund, an organization that helps to subsidize it.

A Biden presidency would also remove common-sense safety requirements for the use of the dangerous abortion drug mifepristone and force Catholic nuns to pay for contraceptives and abortifacients.

President Trump’s transformation, on the other hand, has been in the reverse direction — toward life.

He has an unsurpassed record in the pro-life realm. He truly lives up to his campaign slogan “promises made, promise kept.”

But there is a lot more to be done if he is to “Keep America Great,” and his administration has indicated they are eager to do it.

While the Trump administration has done more than any other to defund abortion giant Planned Parenthood domestically and abroad, the organization is still receiving record amounts of tax dollars to subsidize their billion-dollar death business. This is despite its long history of fraud and the fact that they are under investigation by the Department of Justice for their role in the trafficking of human fetal body parts.

On the issue of bioethics, this president led when his administration placed restrictions on the barbaric practice of fetal tissue experimentation. Four more years would be plenty of time to end taxpayer funding of human embryonic stem cell experimentation as well and redirect these scarce federal research dollars toward ethical alternatives that make real differences for patients.

The Internal Revenue Service should not consider abortions to be medical care (except when the mother’s life is physically endangered) and should not classify them as such.

President Trump’s biggest victory has been transforming the courts, but that too remains unfinished.

He has installed more than 200 judges, including two Supreme Court Justices. Republican appointees now constitute a majority of the full-time judges on 7 of the 13 federal appeals courts.

With Supreme Court vacancies likely in the next four years, President Trump could add justices to the High Court who are faithful to the Constitution rather than pack it with liberal activists.

We have never been closer to ending the destructive legacy of the Roe v. Wade and Doe v. Bolton decisions that allowed abortion on demand throughout all nine months of pregnancy.

This election is a choice between life and death.

It will determine whether decades of pro-life work will stand and move forward or whether the pro-abortion movement will harness the power of the government to advance its dying cause.

Yes, it truly is a battle for the soul of the nation. 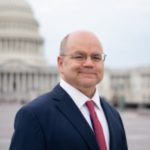 Tom McClusky
Tom McClusky is president of March for Life Action. Tom has a long history of both local and national campaign experience and has appeared on many radio and television talk shows, and his writings have appeared in numerous publications.
Op-Ed: We Have Never Been Closer to Ending the Destructive Legacy of Abortion; This Election Is Truly Life and Death
See more...
Advertisement