All new presidents call for unity and healing. This usually lasts anywhere from between five minutes to five months after their inauguration.

You know how it goes: The first strong gust of oppositional wind that hits their sails and they crank up the outboard motor of partisanship and sniping. Look, you guys had your chance to acknowledge how awesome the new president was. You didn’t, so to heck with this whole unity stuff.

Joe Biden marketed himself as being different, however, which is why you might have expected that whole “unity and healing” pap to last a bit longer.

To moderate voters wary of the leftward drift of the Democratic Party but put off by President Donald Trump’s style, Biden sold himself as a caretaker who could smooth over the waters. He was the kind of president you didn’t have to worry about. In fact, you might not even hear from him for a while. Wouldn’t you like that? And when you did hear from him, it would all be about unity and healing.

And what says unity and healing like pictures of the Biden family’s dogs ripping apart a stuffed Donald Trump caricature chew toy?

Biden has two dogs German shepherds (their names are Champ and Major). Of course, you know this, because a) one of the dogs broke Biden’s foot and b) President Trump doesn’t own a dog, and what kind of filthy monster doesn’t own a dog in the White House? Huh? Yeah, I bet you can’t answer that one, Drumpfers! QE-freaking-D.

Anyway, Champ and Major have their own Instagram account, as Fox News reported last month: @first_dogs_usa. The account also features pictures of Charlie, the “first grandpupper,” owned by Biden’s granddaughter Naomi. The account’s user name is — wait for it — “The Oval Pawffice us.” (Twitter account is “https://twitter.com/TheOvalPawffice.”)

My dad tells this shaggy dog joke about a huge flightless bird called a Rary that demands to be given a chance to fly. The bird’s handlers at the zoo lug him a third of the way up a mountain so he could give it a shot, but the Rary says it’s not high enough.

I mention this only because, even on the off chance my dad were elected president, he would think calling an Instagram account for his dogs “The Oval Pawffice” would be far too corny.

But don’t worry, because “The Oval Pawffice” has edgy jokes like this to make up for it: 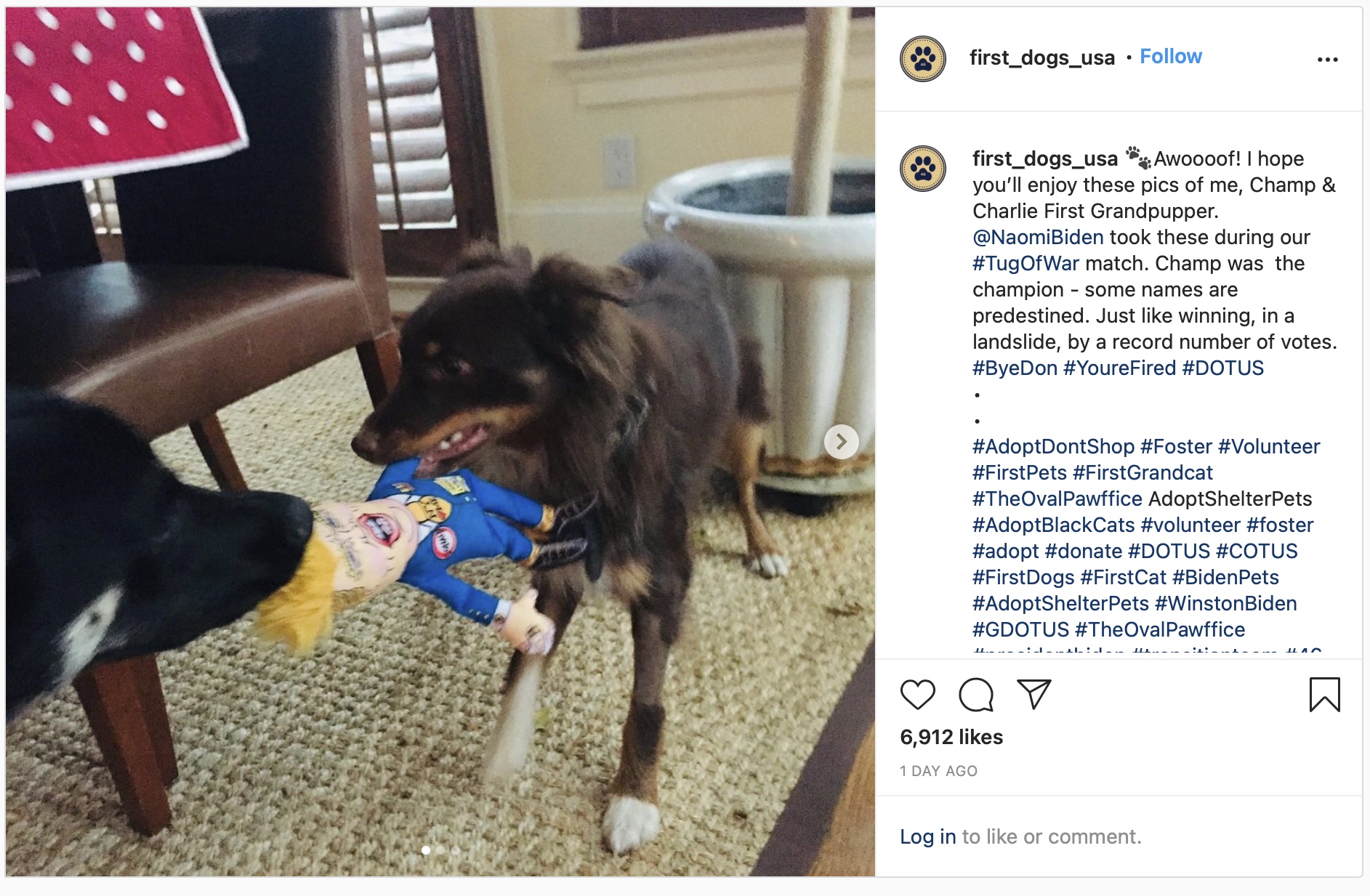 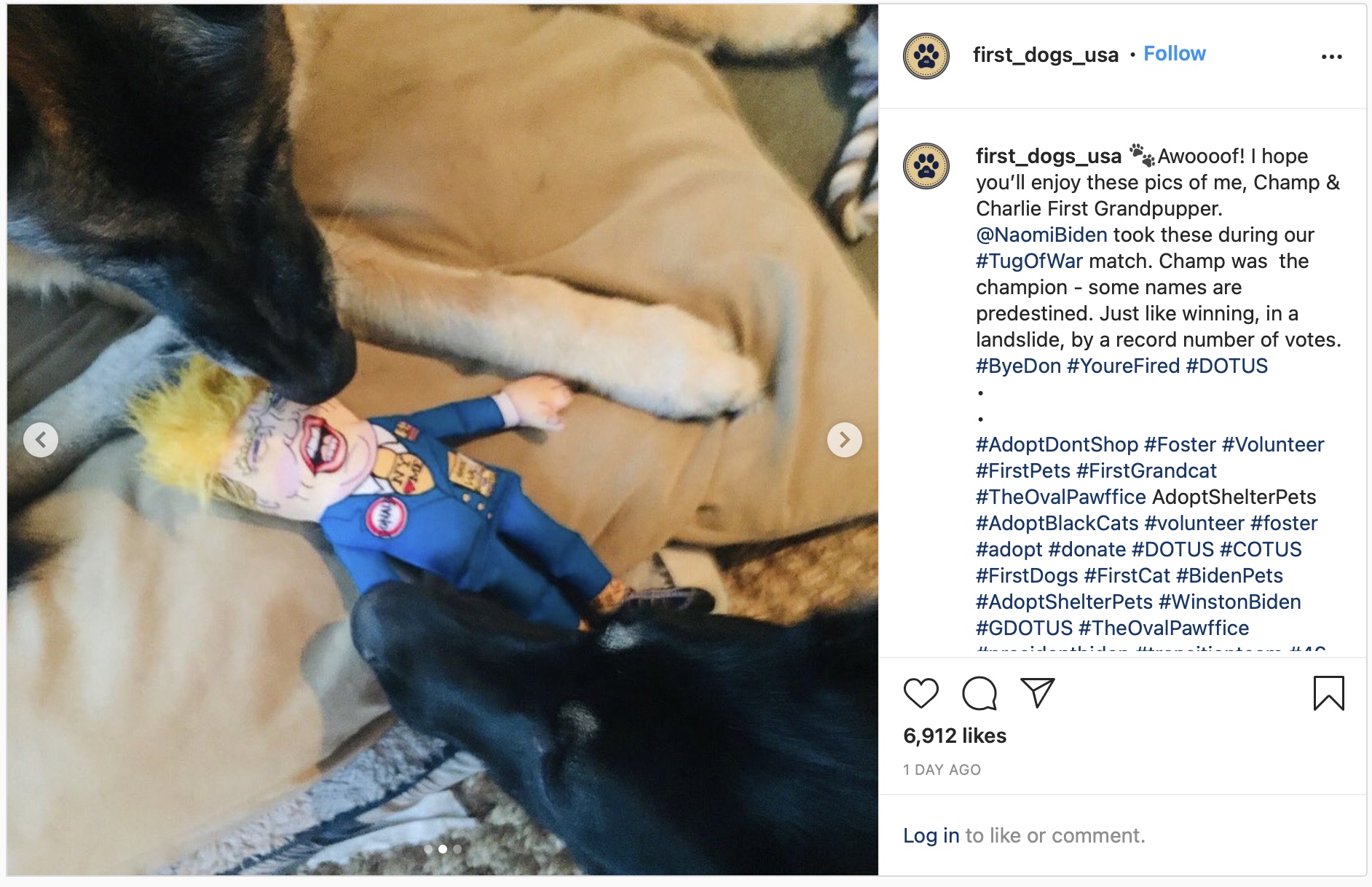 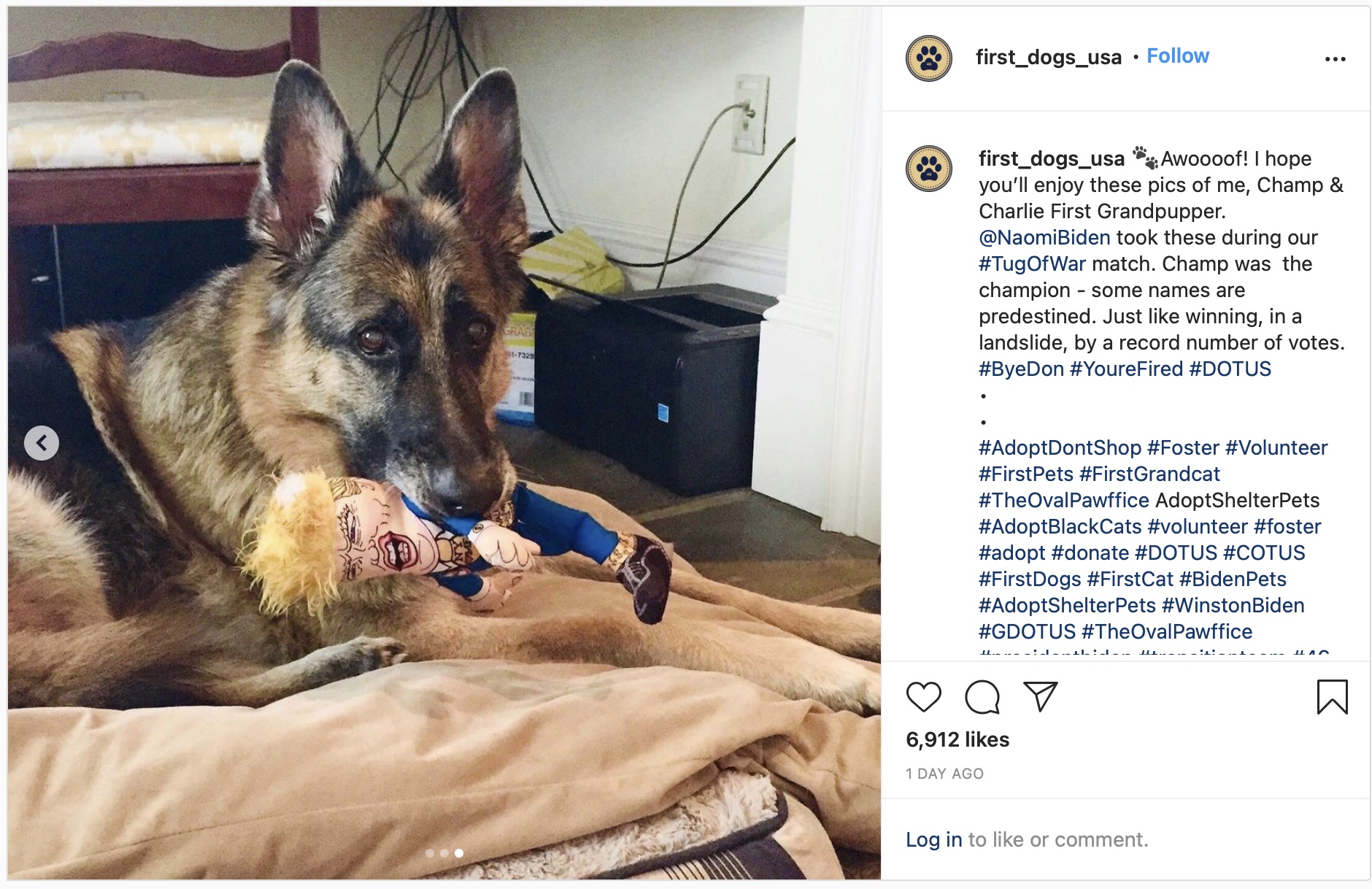 “Awoooof! I hope you’ll enjoy these pics of me, Champ & Charlie First Grandpupper,” the Sunday post read (evidently written by Major). “@NaomiBiden took these during our #TugOfWar match. Champ was  the champion – some names are predestined. Just like winning, in a landslide, by a record number of votes.”

This being Instagram, a solid half of the post was hashtags, including #ByeDon, #YoureFired, #AdoptDontShop, #donate, #transitionteam and #catsofinstagram (the Bidens have adopted a cat, too).

I mention this because nowhere in that torrent of meaningless hashtaggery could you find #unity or #healing.

Their absence is glaring because, again, those words are the brand for Biden and his running mate, California Sen. Kamala Harris. They’re like Nike’s “Just Do It,” Siskel and Ebert’s “Thumbs Up” or Bill Clinton’s “I did not have sexual relations with that woman, Miss Lewinsky.”

In fact, if you listened to their Nov. 7 speeches, given after the media declared them the victors in the Nov. 3 election, you would swear they ran on nothing but unity and healing.

“Joe is a healer, a uniter, a tested and steady hand, a person whose own experience of loss gives him a sense of purpose that will help us as a nation reclaim our own sense of purpose, and a man with a big heart who loves with abandon,” Harris said, later adding that one of Biden’s goals was “to unite our country and heal the soul of our nation.”

“With full hearts and steady hands, with faith in America and in each other, with love of country, a thirst for justice, let us be the nation that we know we can be, a nation united, a nation strengthened, a nation healed, the United States of America,” Biden said.

And then there’s what he said just before that: “For all those of you who voted for President Trump, I understand the disappointment tonight,” Biden told America. “I’ve lost a couple of times myself. But now, let’s give each other a chance. It’s time to put away the harsh rhetoric, lower the temperature, see each other again, listen to each other again.”

That lasted a month. Now, Biden won “in a landslide, by a record number of votes.” #ByeDon! Here, watch some dogs rip you apart.

What’s odd is that the language of the Instagram post sounds vaguely Trumpian. This wouldn’t be a problem if it were Trump, of course. The president has always been clear that he’s not going to play the role of the disingenuous politician.

None of the themes Biden or Harris larded their speeches with would ever have escaped Trump’s mouth — and thank heavens.

But no. Biden and Harris made a bet that America wanted that disingenuousness back. They ran against the fact that Trump didn’t play the game — and whether or not that gambit got them votes, they still own it.

They can’t talk about it being “time to put away the harsh rhetoric, lower the temperature, see each other again, listen to each other again,” and then post an Instagram meme of the Biden family dogs ripping apart an effigy of the current president.

Perhaps the spokesdog for The Oval Pawffice will issue an a-paw-logy for this post. (I’m sorry — this garbage is infectious.) Don’t bet on it, though. With posts like these — and with the tenor of rhetoric from some elements of the Democratic Party — Biden will soon be snarling just as much as the inhabitants of “The Oval Pawffice.”