If you hadn’t guessed already, you’re probably going to be hearing the words white privilege a lot during the 2020 presidential campaign, almost solely from the Democrat side of the aisle.

In some cases, it’ll no doubt be used as an argument for reparations, one of the hot topics this campaign season. In other cases, it’ll be used to attack Republicans in general and Donald Trump in particular.

And, at least in one case, it’ll be used as a way to introduce a candidate. Because that’s apparently the road that we’re all on.

Sen. Bernie Sanders has some pretty far-left supporters, as you’re no doubt aware of. One of them is writer, Black Lives Matter activist and all-around self-promoter Shaun King. King’s reputation has enjoyed a bit of a resurgence of late after he helped generate a tip that led to the arrest in the killing of a 7-year-old girl; media outlets mostly ignore the fact that King continued to push a theory that the killer of the African-American child was white after he likely knew the perpetrator wasn’t, but whatever. It’s the results that count.

Anyway, King has become uncontroversial enough that he was picked to give the introduction at a Sanders rally in Brooklyn on Saturday. Unfortunately, after the shindig was over, they may have realized why he was, at one point, probably too controversial for the gig.

“For most of us in our minds, Bernie has always been a disheveled, gray-haired, bespectacled politician for most of us,” King said at the rally at Brooklyn College, according to The Daily Caller.

“Bernie starts in our mind for who he is right now today. Don’t get me wrong, I love who Bernie is today, but I need to tell you a little bit about how he got here.”

Did King’s description of Sanders get better? It depends on your definition of “better.” King went on to talk about Sanders’ days with the civil rights movement during his time at the University of Chicago.

King says Sanders never told the stories for “political gain,” which is why he was doing it for him.

“Most of us never heard these stories about him growing up here in Brooklyn or being a real activist in the civil rights movement in Chicago,” King said.

“Bernie loved Dr. King, young Bernie. Long before we used the phrase ‘white privilege,’ Bernie had the notion that he needed to use his own white privilege to fight back against racism and bigotry and inequality,” he added.

King then compared him to a comic book hero, noting how he fought for Chicago students who were studying in poor conditions.

“This is not some exaggerated myth. This is the origin story of a political revolutionary,” King said.

RELATED: Sciascia: After Four Big Years, Here Are the Major Takeaways from the Trump Era

Firstly, I’m just going to leave Shaun King talking about “white privilege” alone here. If you don’t know why that might be an issue, just Google some stuff about Shaun King and whiteness. You’ll get an idea real quick. The point is that it’s not terribly important for the point I’m trying to make, but I felt I still needed to address it in that very oblique manner.

Secondly, I’m wondering where Shaun King was when they were going over anti-Semitism in school. He certainly seems to have absorbed quite a lot of other information about the sundry prejudices this country has held throughout its history, so I find it curious he’s missed out on this one. While anti-Semitic hate crimes are on a disturbing uptick of late, they’re likely nothing compared to what they were back in the 1960s, a time when no one really compiled anti-Semitic hate-crime statistics because there weren’t a whole lot of people who particularly cared.

Bernie Sanders wasn’t a privileged white male sailing through the University of Chicago as a legacy student when he just decided to start caring about prejudice. Sanders is Jewish; he was most likely a victim of prejudice himself. The idea that Sanders was emblematic of white privilege is tone-deafness at its worst.

Then again, it’s difficult for an outsider to decide what is and what isn’t tone-deaf in the Democrat universe nowadays. Was a Jewish man in the 1960s a privileged white male? History says no, but those who refuse to learn from history are condemned to repeat it. Or maybe they’re just condemned to pick introductory speakers who are condemned to be ignorant of it.

But then, this is something that Bernie’s going to have to face. The diversity of the Democrat presidential field is something that’s been emphasized over and over again in media reports about the 2020 election. There’s nothing wrong with this, of course, but when you emphasize identity politics so much there’s the fact that even Comrade Bernie can be lost in the mix for being so old and so male and so white — even if he’s a Jewish man who almost certainly faced discrimination while he was dealing with all of that “white privilege” he had back in the 1960s. Don’t worry, though: At least in that respect, he has Shaun King to apologize for him. Surely that has to be worth something. 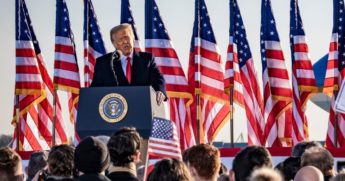