The U.S. Forest Service, an agency of the U.S. Department of Agriculture, has waived fees at three national forests in Florida to give evacuees of Hurricane Florence a “free place to stay” until the storm passes and it’s safe to return home.

“The fee suspension applies to all Forest Service-run facilities as well as concession-run campgrounds under a special use permit,” the agency said in a Friday tweet.

The service opened up the Apalachicola, Osceola and Ocala National Forests in North Florida to hurricane evacuees. It gives the millions of residents fleeing the storm another option of where to shelter. Thousands of people, for example, are taking refuge in Red Cross shelters in the region.

The three National Forests in Florida have waived campground fees for #FlorenceHurricane2018 evacuees looking for a free place to stay. The fee suspension applies to all Forest Service-run facilities as well as concession-run campgrounds under a special use permit. pic.twitter.com/xhpv3oFmUX

Nearly 2 million residents evacuated from the storm’s path. More than 1 million people were ordered to evacuate the Carolina coast Tuesday when forecasts suggested Florence would hit land as a major hurricane.

Many did not evacuate in time or were not under mandatory evacuation orders from state officials. Rescue teams have saved hundreds of people stuck in the storm surge-flooded areas of North Carolina, but dozens more still need to be taken to safety.

Nearly half a million people lost power by Friday morning as high winds and flooding blew transformers and toppled power lines. Duke Energy, a regional utility, warned that residents could be without power for prolonged periods of time.

Florence’s forward speed has slowed, potentially increasing damaging floods, but the storm will continue to weaken as it moves inland. Florence will downgrade to a tropical storm Saturday before turning north, according to the National Hurricane Center. 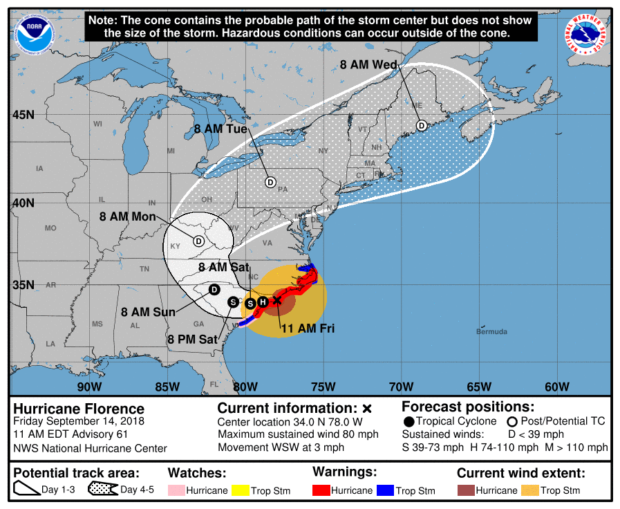 Despite this, NHC warned that “life-threatening storm surges and hurricane-force winds” will continue. The center also said “catastrophic freshwater flooding (is) expected over portions of North and South Carolina.”

Michael Bastasch
Founded by Tucker Carlson, a 25-year veteran of print and broadcast media, and Neil Patel, former chief policy adviser to Vice President Dick Cheney, The Daily Caller News Foundation is a 501(c)(3) non-profit providing original investigative reporting from a team of professional reporters that operates for the public benefit. Photo credit: @DailyCaller on Twitter
Ukraine Conflict Entering Critical New Phase, Expert Predicts 'Bloody Spring and Summer'
Biden's New Border Policy Has Loophole So Big 'You Can Drive a Truck Through'
Biden Blocks US Mining Project, But Pay Attention to What He Signed the Week Before
Former Democrat Congressman Calls Party Brand 'Toxic', Tells Liberals to Stay Away From One Issue
Colorado Court Rules Against Christian Baker Jack Phillips - But His Plan Is Already in Motion
See more...
Advertisement

It wasn't clear whether the shooting was accidental or intentional, but it's clear that shootings of children in D.C. are far too common.
By Jack Davis  January 30, 2023

A Pennsylvania man saw something disturbing on his business' doorbell camera and used the Second Amendment to protect his property.
By Jack Davis  January 30, 2023

'Star Trek,' '24' Actress Dies After Two Decades on the Screen

The actress who played the iconic characters of "Star Trek's" Borg Queen and "24's" Renee Walker has died of cancer at 45.
By Jack Davis  January 30, 2023

"He took the place of a real woman who's been training for years, right?" one Twitter user wrote. "He shattered years of work of some woman."
By Samantha Chang  January 30, 2023

A questionable bit of officiating has the NFL world in a tizzy after the Kansas City Chiefs beat the Cincinnati Bengals 23-20.
By Bryan Chai  January 30, 2023

"Because Jesus lives our friends’ temporary departure from us creates a fraction of the pain compared to the infinite joy there will be."
By C. Douglas Golden  January 30, 2023

Biden Admin Quietly Retires Key Player After Over 2 Decades: What Were They Caught Doing? - Report

A senior Drug Enforcement Administration official was ousted for fraternizing with an alleged trafficker's lawyer.
By Richard Moorhead  January 30, 2023

On CNN's "State of the Union," Swalwell talked about ties with a suspected Chinese spy -- but failed to clarify a key detail.
By C. Douglas Golden  January 30, 2023
Next