Trump challenged Biden to name one single law enforcement agency that supports him.

Biden did not name a single one.

“He doesn’t have any law support. He has no law enforcement support. Almost nothing,” Trump said.

Trump then decided to press the Democratic nominee further.

“Name one law enforcement group that came out and supported you. There aren’t. I don’t think there are any,” Trump said.

Biden said the word “folks” several times and then went silent, while moderator Chris Wallace interrupted the president before he could go any further.

Several law enforcement groups across the country have indeed vocalized their support for Trump’s re-election and his law-and-order message, particularly following the series of riots that have popped up across the country since the death of George Floyd.

The Police Officers Association of Michigan, the National Association of Police Organizations and the Fraternal Order of Police are among the many law enforcement agencies that have come out in support of the president.

“Look at what the national discourse has focused on for the last six months. President Trump has shown time after time that he supports our law enforcement officers and understands the issues our members face every day,” Patrick Yoes, president of the Fraternal Order of Police, said in a statement announcing the group’s decision to endorse Trump.

“The FOP is proud to endorse a candidate who calls for law and order across our nation. He has the full and enthusiastic
support of the FOP.”

Related:
Here Are the Deep State Officials Who Told Us Hunter Biden's Laptop Was 'Russian Disinformation'

The FOP represents more than 355,000 police officers throughout the country.

“During his first four years, President Trump has made it crystal clear that he has our backs,” Yoes continued.

“Our members know that he listens to the concerns of our brothers and sisters in uniform and is able to make tough decisions on the issues most important to law enforcement. President Trump is committed to keeping our communities and families safe.” 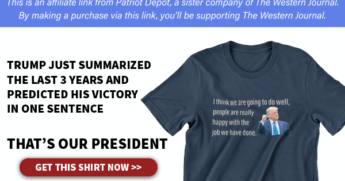