A day after President Donald Trump put himself on the line with a rally in North Carolina and urged voters to elect Republican Dan Bishop in the tightly contested special election to represent the 9th Congressional District in the House of Representatives, they did it.

According to unofficial returns, Bishop was leading Democrat Dan McReady by 3,937 votes, 96,081 to 92,144, with all districts reporting, according to The Hill.

It was widely seen as a run-up to next year’s presidential election, as The Hill reported:

“President Trump also carried the district in 2016 by a nearly 12-point margin over Hillary Clinton, and the special election on Tuesday was seen by Republicans as a sort of testing ground for his political messaging heading into 2020.”

In a second special election Tuesday in the Tar Heel State, Republican Greg Murphy won election in the 3rd Congressional District, where the outcome was widely expected.

The Trump factor loomed large in the 9th District contest, with NBC portraying the election as a referendum on the president, headlining its pre-election coverage, “This North Carolina House race will show if Trump’s coalition is falling apart.”

Trump celebrated the win on Twitter with an all-uppercase message:

“BIG NIGHT FOR THE REPUBLICAN PARTY. CONGRATULATIONS TO ALL!”

BIG NIGHT FOR THE REPUBLICAN PARTY. CONGRATULATIONS TO ALL!

He also claimed some of the credit for the victory.

“Dan Bishop was down 17 points 3 weeks ago. He then asked me for help, we changed his strategy together, and he ran a great race,” Trump wrote in another tweet.

“Big Rally last night. Now it looks like he is going to win. @CNN& @MSNBCare moving their big studio equipment and talent out. Stay tuned!”

Dan Bishop was down 17 points 3 weeks ago. He then asked me for help, we changed his strategy together, and he ran a great race. Big Rally last night. Now it looks like he is going to win. @CNN & @MSNBC are moving their big studio equipment and talent out. Stay tuned!

Trump also celebrated Murphy’s win, and took a dig at media outlets he thought were hoping his efforts to help Bishop would fail.

Greg Murphy won big, 62% to 37%, in North Carolina 03, & the Fake News barely covered the race. The win was far bigger than anticipated – there was just nothing the Fakers could say to diminish or demean the scope of this victory. So we had TWO BIG VICTORIES tonight, Greg & Dan!

.@CNN & @MSNBC were all set to have a BIG victory, until Dan Bishop won North Carolina 09. Now you will hear them barely talk about, or cover, the race. Fake News never wins!

Democratic Congressional Campaign Committee Chairwoman Cheri Bustos cited Trump’s impact on the race in her post-election comment that “we fell an inch short tonight, but it took more than $6 million in outside Republican spending and a last-minute Trump rally,” according to Fox News.

Trump on Monday characterized the race as a chance to block far-left Democrats from gaining even more power in the House, where Democrats currently hold the majority, and send a message for the 2020 elections.

“Under this president, America is great again,” he said, according to NBC.

“We stand for our flag and we kneel for our Maker.”

During his victory celebration, Bishop used his cell phone to call the White House and put the president on speaker phone.

“What he did tonight is monumental,” Trump said as Bishop held the phone to a microphone. “So congratulations!”

The 9th District has been in GOP hands since 1963, but the party suffered a major black eye when allegations of improper conduct clouded the 2018 victory by Mark Harris over McReady, triggering Tuesday’s off-year special election. 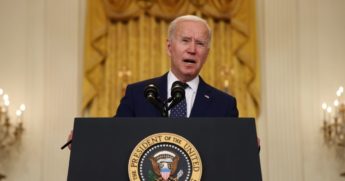