Nike’s decision this week to launch an advertising campaign praising quarterback — and national anthem protester — Colin Kaepernick has sparked much criticism, and even calls for a boycott of the company.

Within the sports world, however, Nike has faced very little pushback. That’s not surprising; Nike has sponsorship deals with so many high-profile athletes as well as numerous professional and college teams that Nike isn’t going to be singled out by most athletes, even if they disagree with Kaepernick’s stance on the anthem.

But one champion athlete isn’t holding in back his criticism of Nike or Kaepernick, who is featured in the Nike ad as saying, “Believe in something. Even if it means sacrificing everything.”

“I grew up in Oregon and was around Nike my whole life,” Covington said, referring to the state where Nike’s corporate offices are located. “It’s funny watching a company that uses child slave labor overseas to make their products all of sudden become humanitarians.”

Covington then said former NFL player Pat Tillman — who walked away from a lucrative contract in pro football to join the military in the wake of the 9/11 terrorist attacks and was eventually killed during his service — was much more of a hero when compared to Kaepernick because Tillman truly gave the ultimate sacrifice for what he believed in. 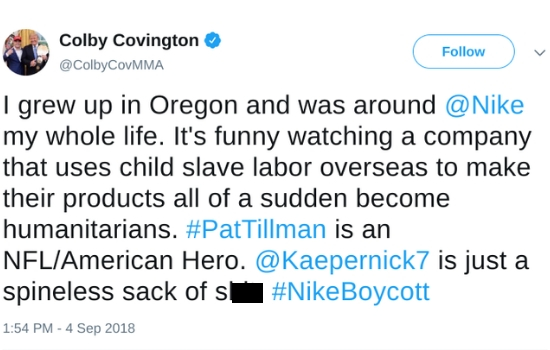 It’s worth noting that UFC is sponsored by Reebok, a fierce competitor of Nike.

But Covington’s public display of patriotism, as well as his support of President Donald Trump, are well documented.

Covington has also made it clear that he has no tolerance for anyone who uses the anthem as a platform for protest.

.@NFL Players: You may kneel before me, but be prepared to get slapped if The National Anthem is playing. ?? #MAGA #Trump2020 #nfl #GreatAmericanWinningMachine pic.twitter.com/tQykeJX5Y7