The year 2021 was traumatic for Americans — for many reasons.

Last year held the most inflation the U.S. has seen since 1982, a supply chain crisis that left grocery stores shelves empty like those in third world countries and gas prices that reached historic levels.

Those are just a few of the byproducts of the Biden administration, which left many frazzled in 2021.

The toll the current, many mockingly call, “regime” has had on the American people is now manifesting itself through the slowest birth rate increase since the founding of the nation. 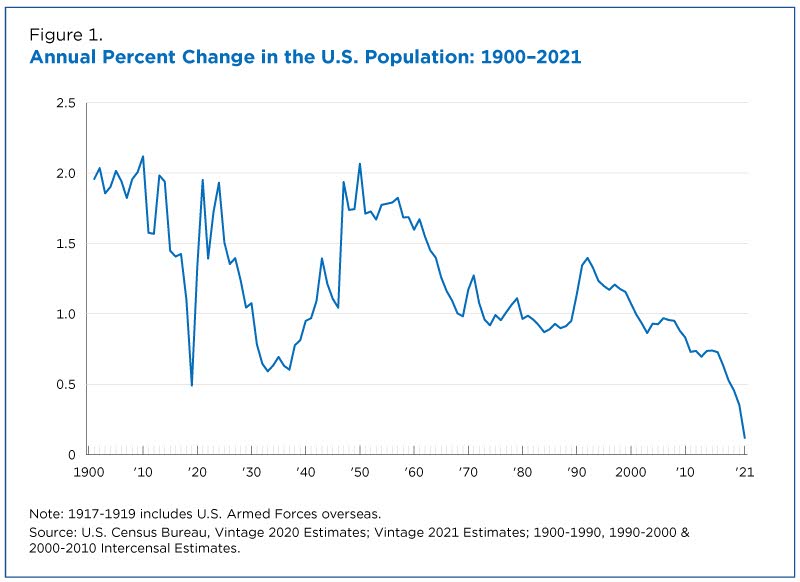 The 0.1 percent growth translates to a population increase of less than one million people, which hasn’t happened since 1937.

The reporting also reflects the lowest numerical value of population growth since 1900 when the bureau began reporting estimates.

Do you think the Biden administration is having an effect on Americans deciding to have children?
Yes: 96% (1075 Votes)
No: 4% (46 Votes)

It would be easy to attribute the decline to the instability created by the effects of COVID, but we have to be smarter than that.

In reality, American’s are feeling unstable, and not wanting to have children could be due to the effects of the administration.

How the leaderships leads is how the people will follow.

If leadership acts incompetent in handling crisis or in this case several, it will provoke insecurity in people.

Who would want to have kids in chaos?

The messaging and policies of the current administration are the result of virus hysteria that would be warranted if the conditions called for it, but they don’t.

We know enough about the COVID-19 virus now to understand that it is not much different than the flu or any other disease already floating around.

If you don’t think so, perhaps the CDC will be able to convince you.

Something that may take more convincing is that the COVID vaccine is “safe” and “effective.”

Heralded as the shot to “save” us all, the COVID vaccine was released widespread across the country in 2021 (though it was first given in Dec. 2020), yet 2021 yielded more COVID deaths than 2020 did. Why would that be the case?

Not to mention, the pharmaceutical companies are released from liability of the vaccines adverse effects.

Statistics like the U.S. population growth being on the decline and the vaccination rate and number COVID deaths on an incline are difficult to make sense of.

They may not make sense because we are being lied to.

Chalk it up to incompetence or ill intention, one thing becoming clearer is the government’s overreach and the disastrous effects Biden’s administration is having on the American people.

We are nearing two years of “15 days to slow the spread.”