'It's a Dumb Idea': The Trucking Industry Reportedly Has No Confidence in Biden's Plan to Solve Shipping Crisis 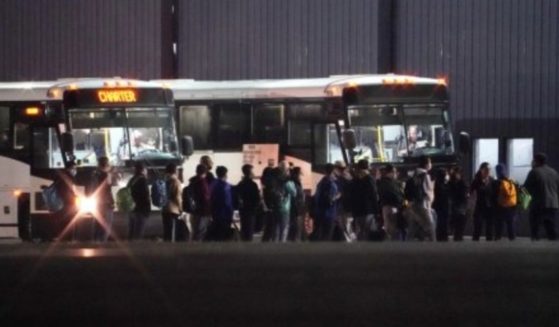 Biden Admin Secretly Flying Thousands of Illegal Migrants Deep Into the US Under the Cover of Night: Report

In recent months, the Biden administration has continually blamed unvaccinated people for the COVID-19 pandemic. As a result, everyday citizens feel the need to harass anyone who does not submit to the authoritarian federal government.

In a video posted to Twitter on Thursday, one man inside a Target store, in an unknown location, took it upon himself to publicly chastise a customer who was not wearing a mask.

The video was taken by the woman being harassed, and it began with her explaining that the man had been following her around the store as she pointed the camera at him.

“You’re not going to follow me around in the store and point at me to people,” she said. “So I will video you.”

Imagine doing this and thinking you came out on top pic.twitter.com/O2DkGPA6Pq

The man then started to parrot leftist talking points about the state mask regulation, and he attempted to bolster his credibility by claiming his wife is some sort of infectious disease expert.

“So my wife is a doctor who specializes in infectious disease,” he said. “So, you know, do you think that she just doesn’t know what she’s talking about?”

Of course, the woman never said anything about his wife or her intelligence. She simply decided that she personally did not want to wear a mask, which should be her choice to make.

As the man continued to approach the woman despite her attempts to back away, other customers began to step in, telling the man to leave her alone. The man protested that the issue was “between the two of us.”

As the man continued to act like a toddler, more customers came to the defense of the woman taking the video. Eventually, security had to step in to stop the man.

This is the direct result of language from President Joe Biden and other leftist politicians. In his Sept. 9 speech announcing his likely unconstitutional vaccine mandates for private businesses, Biden essentially blamed the unvaccinated for exercising their freedoms.

“We’ve been patient, but our patience is wearing thin,” he said. “And your refusal has cost all of us.”

Biden to Unvaxxed: “Our Patience is Wearing Thin” pic.twitter.com/nTpME9FLrK

Inflammatory language like this has real-world consequences. On Aug. 27, a professor at Penn State University allegedly attacked a student protesting against vaccine mandates, The Epoch Times reported.

The student was identified as Avi Rachlin, the leader of an anti-mask and vaccine mandate group called Penn State Resistance. The Times said he was “escorted away by campus police with blood on his face, likely as the result of the incident.”

If Biden continues to demonize unvaccinated Americans, attacks like these two will most likely become more commonplace. After all, if you really think someone is responsible for a large number of deaths, what would stop you from harassing or even attacking that person?

While Biden claims we must all fight the pandemic together, he turns around and blames his political opponents for it. The result is a country falling deeper and deeper into a political divide.

Biden Admin Secretly Flying Thousands of Illegal Migrants Deep Into the US Under the Cover of Night: Report

The Biden administration's tactics for flying illegal immigrants into American communities have been revealed in a new report.
By Jack Davis  October 19, 2021

Amid continued confusion around Jan. 6, one Capitol Police officer was indicted last week for his alleged efforts to muddy the waters.
By Grant Atkinson  October 19, 2021

The Biden administration only wants to meet with North Korea if it involves denuclearization. That plan isn't going swimmingly.
By C. Douglas Golden  October 19, 2021

'While we desire the safe release of our workers, we also desire that the kidnappers be transformed by the love of Jesus,' the ministry said.
By Jack Davis  October 19, 2021

Joe Biden's latest version of his origin story carries a line that even Biden himself has acknowledged is false.
By C. Douglas Golden  October 19, 2021

'I think we make a mistake focusing this all on Donald Trump,' Jon Stewart said in an interview with CNN's Jake Tapper.
By Cameron Arcand  October 18, 2021

It appears that the lead prosecutor in Loudoun County is part of a George Soros-funded campaign known as the 'rogue prosecutors movement.'
By Michael Austin  October 18, 2021

Biden's own Pentagon reportedly warned about the company that produces the drones just days before the Secret Service made its purchase.
By Isa Cox  October 18, 2021

Biden draws new criticism from Democrats on the Afghanistan withdrawal mess and his miserable blunders in the process.
By Abby Liebing  October 18, 2021