It’s no secret that as technology continues to grow, the impact of technology is felt in just about every industry imaginable.

As Google puts it, “while the demand for quality journalism is as high as it’s ever been, the business of journalism is under pressure, as publications around the world face challenges from an industry-wide transition to digital.”

The goal of the initiative is to “build a more informed world [that] is inherently tied to the reporting of journalists and news organizations.”

The tech giant plans on accomplishing this by building “a healthy ecosystem of publishers producing great digital content.”

Google boasts that in one year, they helped news organizations by giving over $12.6 billion to “partners” and driving over 10 billion clicks to their websites.

Those partnerships include left-leaning sites such as The New York Times and The Washington Post.

Additionally, part of the initiative was to pour tens of millions of dollars into helping publishers “strengthen their online video capabilities” through Google News Initiative YouTube Innovation Funding.

On its blog, YouTube says that the funding was released to publishers to “support news organizations in building sustainable video operations” by helping them “build key capabilities, train staff on video best practices, enhance production facilities and develop formats optimized for online video.”

Furthermore, YouTube says that they are working with news organizations to develop “new product features” to “tackle emerging challenges.”

However, the list of publishers that received funding from YouTube/Google is raising some eyebrows.

In an infographic released by the initiative, Google says that it funded 87 projects with 23 countries represented.

We’re excited to announce the recipients of the GNI @YouTube innovation funding! These broadcasters, publishers, agencies and creators share a commitment to quality journalism & a drive to experiment with video storytelling. More at https://t.co/0900Hjv1RK pic.twitter.com/nxdtmMePki

In the list of news publishers from the United States that received funding from YouTube, over half of the publishers could be considered, “center-left,” “left-leaning” or “far-left” news organizations, according to classification by Media Bias/Fact Check.

Additionally, there were other newsgroups not listed by Media Bias/Fact Check that could still be considered “left-leaning” including Advance Local, Graham Media Group, Telemundo, Rogue Rocket, Quartz, Refinery29 and Tribune Broadcasting.

Complex Networks is geared more toward pop culture and was not considered in our assessment, neither was local news outlet WCNT-tv. 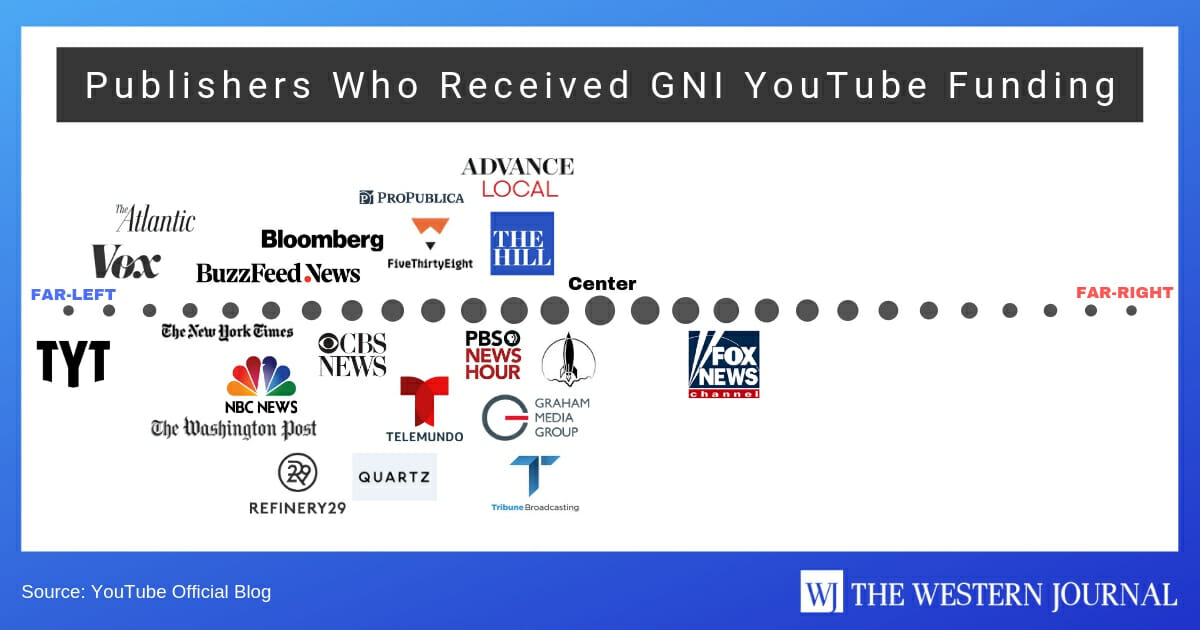 The Western Journal reached out to Google over this perceived discrepancy.

A spokesperson for Google told The Western Journal that the application process was open to anyone and all publishers were encouraged to apply.

However, when asked which right-leaning news organizations applied for the funding, Google did not comment nor give examples of those organizations.

Google says that it is striving to make “authoritative sources readily accessible.”

It appears, however, that from their own blog, the majority of those “authoritative sources” come from the left side of the political spectrum.