A 6-year-old Massachusetts boy has combined his love of art with his compassion for Australian wildlife, raising over $100,000 to help animals affected by the recent brushfires.

Owen Colley of Hingham, near Boston, lived in Australia briefly as a toddler, and the experience has left a fondness for the country in his heart.

“He has a pull to Australia,” Caitlin Colley, the boy’s mother, told CNN. “He’s very proud of the fact that he lived there. I don’t think he remembers any of it, but he’s proud of it.”

When the boy learned that wildfires were destroying the homes and lives of some of his favorite Australian creatures, he became upset, soon expressing his feelings through art.

One little boy has done so much to help his animal friends in Australia and he’s doing it by making one clay koala at a time.​ https://t.co/R7MTtmHQl8

Colley said Owen quietly left the room, and when he returned, he showed her a picture he had drawn of a kangaroo, a koala and a dingo in the rain.

The rain represented Owen’s desire for the fires to go away so Australian wildlife could be safe, according to his mother.

Exciting update! Since this story published, Owen has now raised more than $100,000 for Wildlife Rescue South Coast, as of Thursday afternoon https://t.co/wQU1go1hR9

“We asked him if he wanted to help and … together we came up with this. We could make some clay koalas and give them in response to donations from friends and family.”

Owen and his mother worked together using clay to handcraft the adorable little koalas and bake them in the oven.

Owen and his parents decided that anyone who made a donation of $50 or more to Wildlife Rescue South Coast, a wildlife rescue group in New South Wales, would receive one of Owen’s clay koalas.

Owen quickly reached his fundraising goal of $1,000 and is continuing to fundraise through the GoFundMe campaign his parents set up on his behalf. 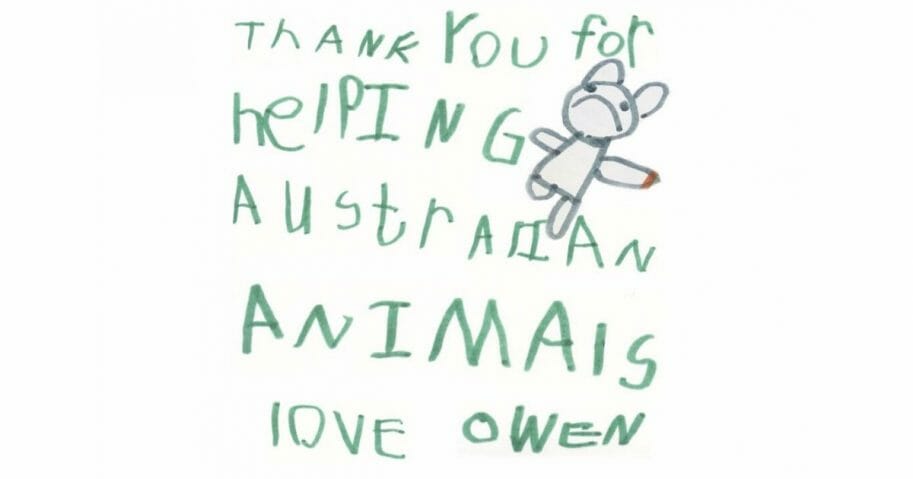 A thank-you note from Owen Colley appears on the GoFundMe page.

Colley and her family are “blown away” by the support shown from people across the country and said they are committed to producing and shipping out what has become thousands of clay koalas.

“We’re seeing all of the donations coming in and we’re like, ‘Oh my gosh, we don’t have the clay,'” Colley said. “We have every intention to fulfill every koala, it just won’t happen by tomorrow. It’s a 6-year-old using his little hands to make the spaces and the ears, so it does take time.”

This 6-year-old boy is making little clay koalas by hand and selling them to help fight the wildfires in Australia, “because helping animals is better than watching TV.”

Colley hopes her son’s story will inspire other kids to do what they can to help, too.

“I just I love the idea that maybe other kids can take this to their communities and sell little clay koalas locally and raise money for this great cause.”