America is at a crossroads. Do we continue down President Donald Trump’s path of economic prosperity, real border security and a renewed hope in the American dream?

Do we embrace constitutional conservatism? Or do we take the left’s path of progressive socialism?

I know which road I’m taking. I’m supporting Trump, and I urge all Americans — Democrats and Republicans — to do the same, for the betterment of this country.

That’s why I have decided to join the Committee to Defend the President, one of America’s leading pro-Trump super PACs. The Committee is on the front lines of President Trump’s re-election fight, and we are committed to not only making America great again, but also making the “America First” agenda endure for years to come.

Since its inception in 2013, the Committee has made roughly $11 million in independent expenditures to support Republicans and conservative goals, in addition to contributing over $365,000 directly to Republican candidates.

Tennessee is a prime example. In 2018, the Committee mobilized on behalf of Republican Sen. Marsha Blackburn of Tennessee, spending more than $1 million to boost her candidacy and shield her campaign from left-wing attacks.

From digital advertising to door-knocking, the Committee engaged with Tennessee voters on all levels, inspiring them to vote for a pro-Trump candidate who believed in Tennessee values — good, old conservative values.

In 2020, we’re taking our support for President Trump to new heights. The Committee is planning $1 million spends in key battleground states such as Florida, Michigan, North Carolina and Pennsylvania. Anti-Trump Democrats like Joe Biden are making their appeals to working-class voters in those states, but they are still loyal to Trump.

Let’s keep it that way. By investing in battleground states, we can keep the electoral map in Trump’s favor.

Voter registration is key. Based on my personal experiences traveling around the country, there are millions of Americans who would support Trump, but didn’t vote in 2016 and fewer still in 2018. Many were unable to cast a ballot, but believe in the “America First” agenda that has transformed this country.

This is a golden opportunity for us.

For Republicans to win, we need to register them and get them out to vote for Trump and Republicans up and down the ballot. That’s why the Committee, in partnership with Great America PAC, has already launched the “Great America Voter Drive.”

Our goal is to spend $1 million to register new Trump voters this election cycle. If and when we do, we can mobilize a conservative army that can re-elect Trump in 2020 and defend his agenda for the next four years.

Again, America is at a crossroads. One path leads us to robust economic growth, historically low unemployment levels for African-Americans and Hispanics, and a clampdown on illegal immigration that advances America’s interests — not those of our countries.

Related:
Op-Ed: Merrick Garland Just Made the Lives of All Americans More Interesting

The other path leads us down the dark and dangerous road of socialism — high taxes, government-run health care, and the decline of American entrepreneurship.

President Trump is leading us to a brighter future, and a greater America. Will you join us? 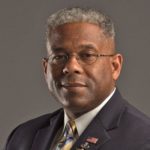 Allen West
Allen West is a retired U.S. Army lieutenant colonel, the chairman of the Republican Party of Texas and a former representative of Florida’s 22nd Congressional District. In 2020, he joined My Faith Votes as a spokesperson to mobilize Christians to participate in elections. His newest book is “We Can Overcome: An American Black Conservative Manifesto" (Brown Books, 2020).
Op-Ed: Americans Flocked to Churches After 9/11, Then Something Big Changed
Allen West: Here Are 3 Reasons Every Christian Should Vote in the Georgia Elections
Allen West: BLM Radicals Don't Want To Fix America - They Want To Destroy It
Allen West: In 2020, Embrace Constitutional Conservatism, Not Progressive Socialism
See more...
Advertisement