Conservatives have long been skeptical of sweeping man-made global warming claims, and not just because the science is far from settled.

It seems a bit too convenient that the same politicians who want a nanny state government also declare that the world will come to a fiery end unless we give them what they want — and Democratic Rep. Alexandria Ocasio-Cortez of New York is a prime example.

The gaffe-prone freshman (sorry, freshperson) member of Congress has already gone all-in on climate change hysteria, infamously claiming that the world would end in 12 years unless we handed her the keys to the American economy.

Now, Ocasio-Cortez is at it again. In her latest attempt to blame seemingly everything on weather patterns, AOC just made a bizarre leap by insisting the U.S. immigration crisis is caused by — you guessed it — climate change.

In a tweet posted on Monday, AOC tried to link mass migration, such as the refugee caravans, to “climate change.”

“Remember when we said climate change would cause mass migration, & the right called us crazy?” the congresswoman wrote. “Well, it’s happening. And walling ourselves off from the world isn’t a plan for our future.”

“It’s time to recognize climate refugees in our immigration policies,” she declared.

Remember when we said climate change would cause mass migration, & the right called us crazy?

Well, it’s happening. And walling ourselves off from the world isn’t a plan for our future.

What exactly is a “climate refugee?”

AOC included a link to a Mic.com article which used Hurricane Dorian as an example of this.

“Following Hurricane Dorian, large parts of the Bahamas have been left in a state of ruin, made unlivable to the hundreds of thousands of people who have called the islands their home,” the article shared by Ocasio-Cortez read.

“Those citizens of the devastated nation will just be the latest in a growing number of people who have been displaced as a result of extreme weather events,” the article continued.

That by itself isn’t wrong. After all, hurricanes can certainly impact lives.

But even the article shared by AOC stopped short of blaming weather events on man-made global warming, and scientists have cautioned people not to make that leap based on thin evidence.

“While no one natural disaster can be completely attributed to the massive amount of greenhouse gases pumped into the atmosphere by humans, there have been efforts to track just how much worse we have made these disasters,” the outlet continued.

“In the Atlantic, it is premature to conclude with high confidence that human activities–and particularly greenhouse gas emissions that cause global warming–have already had a detectable impact on hurricane activity,” the government-run National Oceanic and Atmospheric Administration cautioned.

Similarly, a chart of severe weather events since 1910 shows a bit of an uptick over the last few years, but the trend is hardly definitive. 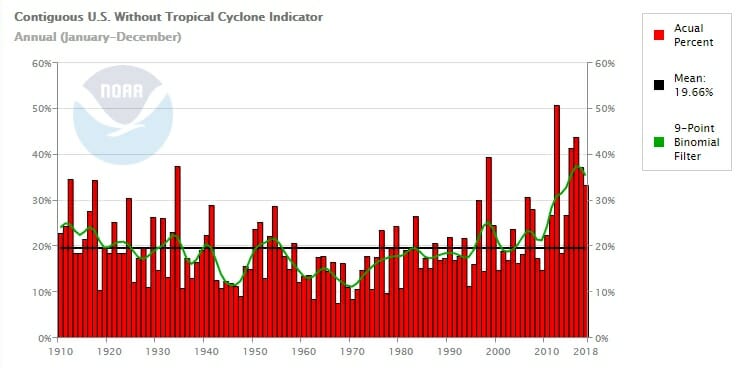 If the number of people being displaced by storms is increasing, this may actually be a good thing compared to the alternative.

“If there is good news associated with the massive amount of displacement being caused by these types of events […] it is that the number is so high because we’ve gotten quite good at getting people out of the way of deadly storms,” Mic reported.

“Previously, a significant portion of those seven million people forced to leave their home would have instead been killed by storms,” the outlet said.

Finally, Ocasio-Cortez’s central claim that the United States must accept an endless stream of immigrants because of severe weather fails the basic sniff test when you think about it. ‘

Migrants routinely name economic conditions and crime back home as reasons they head for the border, not rain.

Even if severe weather is indeed increasing — a possibility which is far more unproven than the left would have you believe — there is a huge difference between people temporarily evacuating a battered area, and them showing up at the U.S. border to demand that they live in the country indefinitely.

Americans routinely rebuild after tornadoes and hurricanes, yet AOC seems to think that no other people are capable of doing the same.

We’re supposed to believe that if a hurricane hits the Bahamas, the 400,000 people who live there should abandon their home country and all come to America, which sits just 300 miles away.

Apparently handing out green cards like candy magically protects people from severe weather, and the already-broken immigration system will be just fine if millions more people show up at the border and demand entry because it’s storming.

This is exactly the kind of half-baked squawking that Ocasio-Cortez is known for. That probably won’t change, but the American people don’t have to fall for it.