It’s no secret Cardi B isn’t a fan of President Donald Trump.

The female rapper and self-proclaimed political science junkie even asked Nigeria for citizenship after the Trump administration took down Iranian Maj. Gen. Qassem Soleimani in a January drone strike, citing fears the president was leading the country into World War III.

Now, Cardi B is coming after the first lady.

Cardi B replied, “Didn’t she used to sell that Wap?”

Didn’t she used to sell that Wap? https://t.co/ahgIf96S6a

“Wap” is a reference to Cardi B’s new and controversial hit single, “WAP,” with Megan Thee Stallion. “WAP” stands for “wet a** p****.” The song starts with the lyrics, “Whores in this house, There’s some whores in this house,” and gets significantly more vulgar from there.

Cardi B also tweeted an old photo of Mrs. Trump from her modeling days. 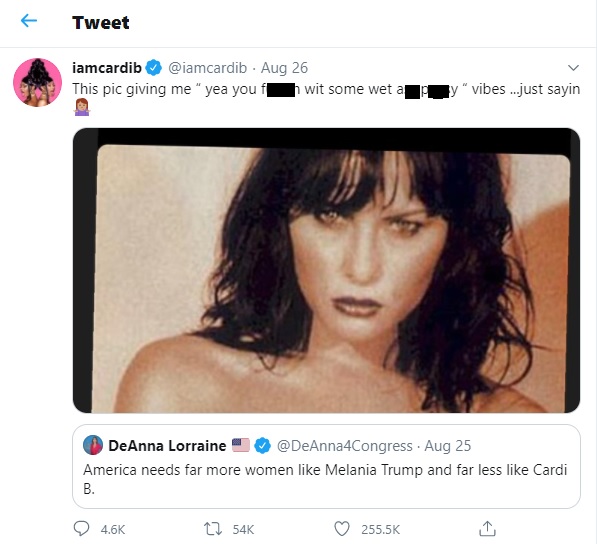 Cardi B’s comments appear to be referencing rumors that the first lady worked as an escort around the time she was working as a model, according to People.

Mrs. Trump has long denied those rumors, and no evidence has surfaced to refute her denial. She even sued the U.K. Daily Mail in 2016 for libel over its publication of the rumors. The Daily Mail ultimately issued an apology to Mrs. Trump and, reportedly, paid her a multi-million dollar settlement.

Cardi B, on the other hand, has openly stated she used to drug and rob men back when she worked as a stripper, according to the U.K. Independent.

It’s ironic that a woman who raps that her sexual partners should “Bring a bucket and a mop for this wet-a** p****” (and that’s one of the tamer lyrics) would suggest that Melania Trump is the one who is perverted.

Recently, Cardi B has become a cheerleader for the Democrats, and for Joe Biden in particular. The presidential candidate who doesn’t have time to sit down with Fox News’ Chris Wallace had no problems sitting for a softball interview with the rapper for Elle magazine.

Related:
Flashback to When Things Were Better: Melania Trump's WH Christmas Decorations Throughout the Years

Despite her criminal past and vulgar lyrics, the left holds her up as some sort of feminist icon.

She’s done interviews with prominent Democrats like Bernie Sanders and Alexandria Ocasio-Cortez. Her interview with Biden took place in the lead-up to last week’s Democratic National Convention – one of the few interviews he’s granted in recent weeks.

Warning: the following interview isn’t graphic, but you might lose a few IQ points watching it.

Meanwhile, Melania Trump’s speech from the White House Rose Garden on Tuesday was eloquent, compassionate, and unifying. She spent her time trying to lift up the people of this country, not tear down her political enemies.

The Democrats claim to be the party that supports strong women, but the liberals continually put down women who don’t have the correct political designation after their names.

If President Trump was a Democrat, Melania would be seen as an aspirational model for minorities, and women in particular. She was born in Slovenia and came to the United States for the opportunities available here.

She’s an immigrant who became the first lady of the United States – the first first lady to be a naturalized citizen, and the first for whom English is not her native language.

If that’s not the American Dream, I don’t know what is.