WARNING: The tweets below contain profane language that some readers may find offensive.

Owens, the communications director for conservative activist group Turning Points USA, on Saturday sent out a pair of tweets quoting Jeong’s anti-white statements — which did not earn her a Twitter suspension — but swapped out the word “white” with “Jewish” and “black.” 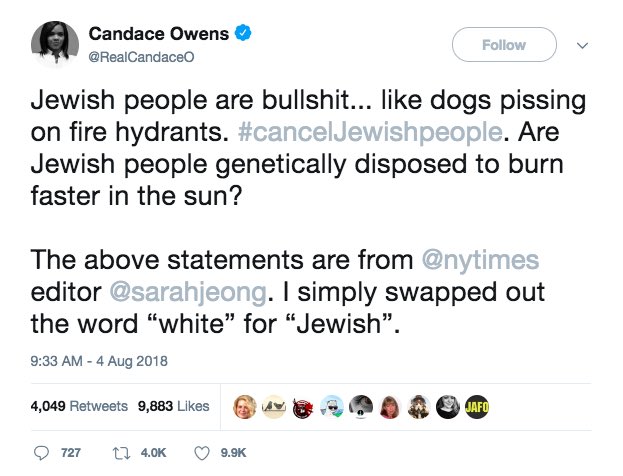 “Twitter takes reports of violations of the Twitter Rules very seriously,” Twitter’s support team wrote in an email to Owens, who shared it with TheDCNF. “After reviewing your account, it looks like we made an error.”

“This was our mistake and we’ve apologized to the account owner for the error,” a spokeswoman for Twitter told TheDCNF. The spokesperson did not say whether a human content monitor or an algorithm was responsible for suspending Owens’ account.

Owens’ objective in sending out the provocative tweets was to demonstrate what she sees as a racial double standard, she told The Daily Caller News Foundation in a phone interview. And she thinks Twitter proved that point beautifully.

“The thing is, I wouldn’t have minded if I was locked out, because I actually agree with Twitter that that language is inappropriate,” Owens said.

“My point in tweeting that and replacing the word with black and Jewish yesterday was to show how different that mentality is when you see it in that context and you see talking about Jewish people and predisposed to burning under the sun or black people saying they should live underground,” she said.

“It’s horrifically racist, but somehow we’ve gotten to a point in society where it’s OK to say the exact same thing about white people, and that’s problematic.”

Sarah Jeong, the @nytimes, and the truth about racism in America. https://t.co/adIqd4bc2n

Related:
59-Year-Old Male 'Ice Princess' Is Trans Centerpiece in Figure Skating Diversity Showcase - But Then He Starts to Wobble

Twitter’s regulation of speech is under increased scrutiny after the company was revealed to have suppressed prominent conservatives on the platform, including Republican Reps. Matt Gaetz of Florida, Jim Jordan of Ohio, Mark Meadows of North Carolina and Devin Nunes of California. Then, too, Twitter said its censorship was in error.

Twitter similarly suspended conservative commentator Kathleen McKinley on July 27 for two tweets: one that opposed clearing self-identified transgender persons for military duty and one that tied “extreme Muslim beliefs” — rather than mainstream Muslim beliefs — to the practice of honor killings.

Unlike Owens, McKinley has yet to receive an apology from Twitter.

Peter Hasson
Founded by Tucker Carlson, a 25-year veteran of print and broadcast media, and Neil Patel, former chief policy adviser to Vice President Dick Cheney, The Daily Caller News Foundation is a 501(c)(3) non-profit providing original investigative reporting from a team of professional reporters that operates for the public benefit. Photo credit: @DailyCaller on Twitter
Ukraine Conflict Entering Critical New Phase, Expert Predicts 'Bloody Spring and Summer'
Biden's New Border Policy Has Loophole So Big 'You Can Drive a Truck Through'
Biden Blocks US Mining Project, But Pay Attention to What He Signed the Week Before
Former Democrat Congressman Calls Party Brand 'Toxic', Tells Liberals to Stay Away From One Issue
Colorado Court Rules Against Christian Baker Jack Phillips - But His Plan Is Already in Motion
See more...
Advertisement

A Pennsylvania man saw something disturbing on his business' doorbell camera and used the Second Amendment to protect his property.
By Jack Davis  January 30, 2023

'Star Trek,' '24' Actress Dies After Two Decades on the Screen

The actress who played the iconic characters of "Star Trek's" Borg Queen and "24's" Renee Walker has died of cancer at 45.
By Jack Davis  January 30, 2023

"He took the place of a real woman who's been training for years, right?" one Twitter user wrote. "He shattered years of work of some woman."
By Samantha Chang  January 30, 2023

A questionable bit of officiating has the NFL world in a tizzy after the Kansas City Chiefs beat the Cincinnati Bengals 23-20.
By Bryan Chai  January 30, 2023

"Because Jesus lives our friends’ temporary departure from us creates a fraction of the pain compared to the infinite joy there will be."
By C. Douglas Golden  January 30, 2023

Biden Admin Quietly Retires Key Player After Over 2 Decades: What Were They Caught Doing? - Report

A senior Drug Enforcement Administration official was ousted for fraternizing with an alleged trafficker's lawyer.
By Richard Moorhead  January 30, 2023

On CNN's "State of the Union," Swalwell talked about ties with a suspected Chinese spy -- but failed to clarify a key detail.
By C. Douglas Golden  January 30, 2023

A viral video of a fight at the store in 2014 featured a man pulling a raccoon from his jacket. Problems haven't gone away since.
By Warner Todd Huston  January 30, 2023

The lead actor of a beloved 90's era sitcom looks to be chasing a seat in Congress -- a seat that currently belongs to Adam Schiff.
By Bryan Chai  January 29, 2023
Next