Mike Huckabee: Liberals Don't Want to Give Up Masks Because It Means Giving People Their Power Back

Every election cycle, it happens with the regularity of the swallows returning to San Juan Capistrano: Party officials identify some great white whale of the opposition they believe they have an outside chance of harpooning and, with the monomania of a thousand wonk Captain Ahabs, pursue the dream of scoring the ultimate upset.

Thank heavens for this class of upstart candidates and the support that coalesces around them, by the way — at least if they’re Democrats.

Not only is the fawning coverage given to them by the media revealing, but the candidates are often a sinkhole into which millions upon millions of dollars that could have been better used elsewhere are constantly shoveled into.

We’ve seen it this year, as Democrat Amy McGrath takes on Senate Majority Mitch McConnell of Kentucky in a bid that’s likely doomed to fail.

And we saw it in 2018, when sweaty huckster Beto O’Rourke challenged Texas Republican Sen. Ted Cruz. O’Rourke received a Brobdingnagian amount of campaign cash and was called a “rock star” by an ABC News correspondent before losing quite predictably — and, in the process, essentially taking money that could have gone to viable candidates and lighting it on fire.

In 2020, one of the big-name incumbent Republicans who Democrats are targeting is Rep. Elise Stefanik. The New York Republican, who took office following the landslide Republican midterm victories of 2014, gained new prominence amid the Trump impeachment process as a steadfast and erudite defender of the president — and one who liked a good troll, to boot.

The chief Captain Ahab in this case is Tedra Cobb, a business consultant who served in her country’s legislature for two terms, according to Ballotpedia. Not exactly the kind of person who you might think would knock off a featured speaker on night three of the Republican National Convention, and even the Albany Times Union — in a Stefanik-bashing editorial which declared her vulnerable — noted that Cobb winning, “though hardly impossible, still seems unlikely.”

So you’re saying there’s a chance. Anyhow, Cobb’s probably going to be handicapped by self-owns like her campaign’s policy positions on the military.

In the laundry list of the ways in which Cobb implies she would be different than Stefanik, she says that she will “[s]upport legislation such as the Military Family Stability Act, which provides flexible timing when moving for new assignments.”

In a tweet Tuesday morning, Cobb directed voters to her plan, saying: “Stefanik has turned a blind eye to the bounties put on American soldiers. Supporting military service members and Veterans cannot just be a political talking point.”

Stefanik has turned a blind eye to the bounties put on American soldiers. Supporting military service members and Veterans cannot just be a political talking point. Learn more about how I plan to support our veterans and active-duty military personnel at: https://t.co/J5zWVTpoPx pic.twitter.com/ZolZQ1ixoO

It shouldn’t be a political talking point, no.

However, it’s interesting to note that the Military Family Stability Act is already law, having been signed in December 2017.

I’m disappointed that Rep. Stefanik voted against it, given she’s voiced support for families in our armed forces. It shouldn’t be enough for you to change your vote to Cobb, but Stefanik’s refusal to support the bill is, quite frankly, a disapp– 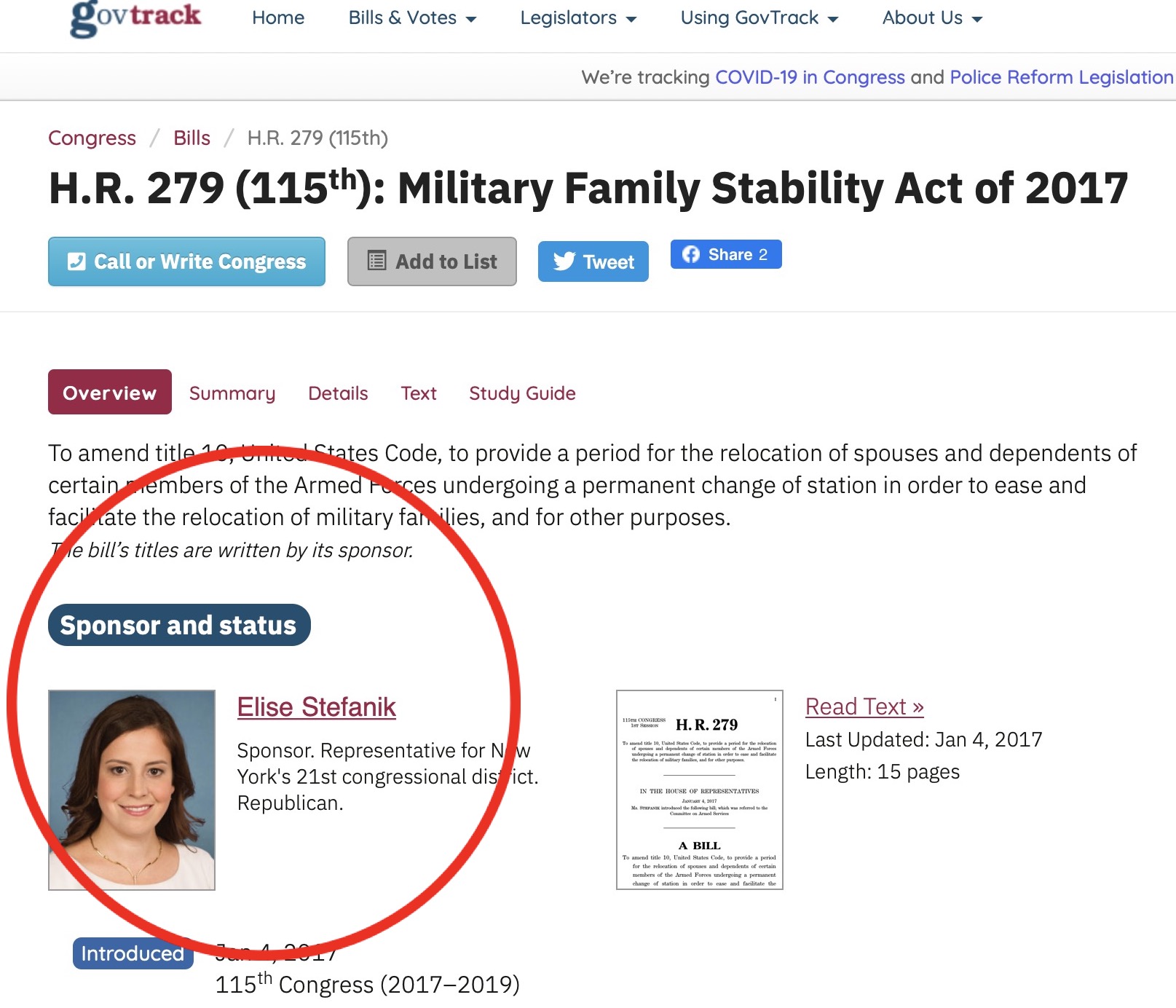 Oh wait, she sponsored the House version of the bill. Never mind, then.

“As the home of Fort Drum and the Kesselring Navy nuclear site, our district knows firsthand the critical role military families play in supporting our troops and providing for our national defense,” Stefanik said in a statement upon introducing the bill in January 2017.

“Military families make great sacrifices when relocating and transitioning to new schools, jobs and communities, and we must do all we can to help ease their burden. Military families serve too, and I am proud to introduce these commonsense measures to support these patriots.”

When Stefanik called out Cobb for essentially plagiarizing a bill she wrote, claiming to support it (even though it’s law) and refusing to credit her, Jerry Moore — editorial page director at the Watertown Daily Times — politely and wrongly mansplained to Stefanik why her anger was uncalled for.

The @EliseStefanik is going ballistic and claiming that @TedraCobb “plagiarized” Stefanik’s Military Family Stability Act. Cobb didn’t “plagiarize” anything; she said she supports the law. And she put that on her website more than 2 years ago. So what’s the controversy? https://t.co/lYilVvIirZ

The controversy is that it’s still on there, despite the fact that Cobb gave no credit to Stefanik or informed voters it was law.

As for “more than 2 years ago,” Stefanik introduced this more than three years ago, in January 2017. It’s already law. Is Cobb giving Stefanik credit? Of course not — by including it on her laundry list of campaign goals, she’s implying the person who authored the legislation is actually against it.

My opponent tweeted her veterans plan this morning.

She included my exact bill as part of her own veterans plan.

How do I know this?
Because I wrote it.
Passed it.
Got it signed into law.

But @wdt_oped thinks it’s ok for my opponent to say it’s HER veterans plan?! https://t.co/uciyCzk53B

It’s worth noting that once upon a time — nine months ago, to be exact, back when we were in the midst of impeachment — Stefanik’s defense of President Donald Trump made her a popular fundraising money pit, thanks in part to promotion from The Lincoln Project’s George Conway:

.@EliseStefanik is lying trash. Please give to her opponent, @TedraCobb. https://t.co/NDstzv2Qgr

While Conway is no longer with The Lincoln Project because of familial issues, it’s worth pointing that this is a group of people who claim to want to restore dignity to politics by “saving” the GOP, yet here’s Conway fundraising for Cobb by calling Stefanik “lying trash.”

Cobb would only end up raising $2 million during that quarter, but the cause shall endure and the dream shall never die:

Wouldn’t it be nice to have a congressperson who isn’t trying to destroy our democracy? Today the magnificent Tedra Cobb joined us at our #SaveThePostalService protest. Follow and donate to @TedraCobb in NY 21.

Since Rep. Elise Stefanik is speaking at the RNC tonight, here’s info about her Democratic opponent – Tedra Cobb. #DemCastNY

Agreed. Now is as good a time as any to set those greenbacks aflame.

Don’t just do it for me, though.

Do it for Beto O’Rourke. Do it for Amy McGrath. And most importantly, do it so your money doesn’t go to anyone who has a chance of winning.

A Nashville gas station is making a statement as gasoline prices rise in President Joe Biden’s America. The average national gas price hit $3.045 a gallon, the highest since October […]

Kids are known to create colorful retellings of actual events. Many times, parents have to do a lot of work to separate fact from fiction — especially if the case […]

Former United Nations Ambassador Nikki Haley does not suffer fools when it comes to foreign policy, and her recent criticism of President Joe Biden highlights one of the prior administration’s […]

Britain’s Prince Harry found out this week that trashing the First Amendment re-ignites the Spirit of 1776 among Americans. The duke of Sussex and his wife, Meghan Markle, now live […]

On Wednesday, a man named Ty McIntyre was checking a property in Cobb County, Georgia, as part of his job when he discovered something unusual. A huge pit had been […]

Last week, the Centers for Disease Control and Prevention decided to, out of the blue, generously bestow upon Americans their official blessing to stop wearing masks in most settings, if, […]

The Supreme Court secured a major victory for gun rights Monday as it unanimously ruled that seizing firearms while someone is being monitored for suicide is unconstitutional. The case centered […]

Former Vice President Mike Pence argued in an opinion piece for Fox News on Monday, tax day, that if President Joe Biden’s sock-it-to-American-job-creators tax plan were put in place, it […]

Throughout the pandemic, the left has insisted on violating Americans’ medical freedom. Even as the danger from COVID-19 wanes, President Joe Biden is warning people who don’t want to do […]

After Going Missing for Nearly a Week, Tiger Seen Roaming Streets Is Surrendered to Authorities: Police

Houston has been abuzz with the tiger incident of the last week. On May 9, people in one Houston neighborhood were shocked to see a tiger out and about, casually […]