President Trump’s second-term agenda outlines a clear-headed strategy for ending our economic reliance on China and holding the Chinese government accountable for mismanaging and lying about the deadly coronavirus.

It is no surprise that Chinese state-owned media outlets have expressed support for the group of pro-Biden, anti-Trump Republicans known as the Lincoln Project. “Beijing Biden” is on China’s side, and unlike President Trump, it won’t do anything to stop the communist regime’s malfeasance.

When Donald Trump says “America First,” he means putting the American people first — and unlike previous presidents, he has to contend not only with the opposition party but also with establishment elites ostensibly representing his own party who have forgotten their responsibility to the American people.

To this day, Biden acts as though China is nothing more than an impoverished backwater. On the campaign trail this election cycle, he has scoffed at voters who worried about losing their jobs to unfair competition from China and even insisted that the second-largest economy in the world is not “competition” for American workers.

Back in 2001, more than a decade after the regime massacred thousands of pro-democracy protesters in Tiananmen Square, Biden said the United States should not defend Taiwan — the last remains of China’s pre-communist government — if it declares itself an independent nation.

More recently, when President Trump issued travel restrictions and quarantine restrictions on travelers from China early on in the coronavirus pandemic, Biden criticized the president’s life-saving decision as “xenophobic” and bigoted towards Asians.

Unlike Biden and the other globalists who make up the Washington political establishment, Donald Trump says what he means and means what he says — especially when it comes to demanding accountability from China.

Speeches by Secretary of State Mike Pompeo, Attorney General William Barr and other senior officials have made it very clear that the entire Trump administration means business and that American businesses that collaborate with China should consider themselves to be on notice.

Despite howls of outrage from establishment politicians, the president fulfilled his promise to impose strategic counter-tariffs on China in response to the communist regime’s ongoing trade abuses.

Contrary to the doom-and-gloom predictions of his critics, the strategy has paid off, leading to the “Phase One” trade agreement that was signed earlier this year.

Earlier this year, the president ordered the Thrift Savings Plan, which handles military pensions, to abandon plans to shift investments to a fund that includes Chinese companies, some of which include weapons manufacturers and state-owned enterprises hostile to U.S. interests.

The situation has escalated since then, of course, as the world has reeled from the impact of the coronavirus pandemic that originated in Wuhan, China, and spread globally due to the secrecy and mismanagement of Chinese government authorities.

The Trump administration has not backed down, however, withdrawing U.S. funding from the World Health Organization after that outfit proved to be little more than a mouthpiece for Beijing’s misinformation and propaganda.

President Trump’s second-term agenda shows that he is determined to build on the successes of his first term, ensuring that China does not overtake us economically, diplomatically or militarily — no matter how cunningly or deviously Beijing plays its hand. 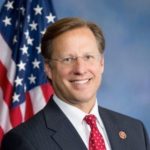 Dave Brat
David Alan Brat is the dean of the Liberty University School of Business. He served as the representative for Virginia's 7th Congressional District from 2014 to 2019.
Dave Brat: Compare Trump's Record on China to Biden's - It's Clear Who the 2020 Winner Should Be
Dave Brat: Don't Believe the Theatrics - DNC Delegates Adopted the Farthest-Left Platform in American History
See more...
Advertisement

A new wave of predictions shows many experts are expecting that a recession is coming to Joe Biden's America.
By Jack Davis  September 25, 2022

It was not a great moment for Nancy Pelosi. And for it to happen in the liberal bastion of Manhattan was the biggest surprise of all.
By Elizabeth Stauffer  September 25, 2022

A massive fire took place at a Paris food market Sunday. The fire produced a cloud of smoke so large it blotted out the sun.
By Michael Austin  September 25, 2022

A Connecticut state trooper became a distressed veteran's guardian angel when he encountered the man on an interstate highway.
By Richard Moorhead  September 25, 2022

Amid rumors of a coup in China involving President Xi Jinping, one expert said something is stirring in Chinese politics.
By Jack Davis  September 25, 2022
Next