As a veteran, I have spent my entire life defending our country.

I’ve flown in combat against enemies who have threatened American lives, interests and values. I know an adversary when I see one, and it has become clear over the last several years that China has emerged not merely as an adversary, but as our top geopolitical threat.

One of the most alarming and pertinent illustrations of China’s venomous ambition is its egregious handling of the coronavirus outbreak.

Instead of confronting the outbreak head-on, the Chinese government lied for months about its existence, destroyed samples, silenced doctors, expelled journalists, denied entry to the U.S. Centers for Disease Control and Prevention and even blamed the U.S. Army for its origins.

Due to China’s actions — or rather, inaction — this virus metastasized into a pandemic that has taken a catastrophic toll on our country and the world.

While we are continuing to slow the spread of the virus, the United States has suffered the loss of more than one hundred thousand American lives, millions of American jobs and widespread economic calamity.

Unfortunately, China’s behavior during this pandemic is just yet another data point in a decades-long trend of increasingly aggressive, malign behavior. For too long, the Chinese government has taken advantage of America and our workers. They’ve engaged in espionage, using our own technological infrastructure as a tool to spy on us.

We must also shine a light on the human rights violations perpetrated by the Chinese government, including against the Uighurs, a religious minority group in the Xinjiang province.

Recent video showed Uighur men and women blindfolded, handcuffed, on their knees, being forced onto trains at “re-education” camps. The men and women held at these camps are subjected to forced labor, abortions and sterilizations. It is heartbreaking and wrong.

Xi Jinping and his government must be held accountable. And they will be — thanks to the decisive leadership of the Trump administration and Senate Republicans who are leading the way on legislation to hold China’s feet to the fire.

As part of these efforts, I introduced a package of legislation targeted at blocking different levels of exploitation by the Chinese government.

In response to the damages caused by China’s negligence, I introduced a bill to hold China financially accountable to the U.S. citizens who suffered from the coronavirus.

Not only should China be held responsible, the country should not be allowed to profit from it — especially from U.S. taxpayer dollars.

That’s why I introduced the No Funds to China’s Military Act, which would ban the use of federal dollars to purchase products and services from companies tied to the Chinese government.

Related:
Op-Ed: More Than a Coincidence? Gaffe-Prone Biden Has Made This 'Mistake' 3 Times Already

We must also wean our dependence on China’s products.

Along with other senators, I introduced a resolution demanding that the International Olympic Committee find a new host city for the 2022 Winter Olympics due to Beijing’s numerous and blatant human rights violations.

And most recently I introduced a bill, along with Sen. Marsha Blackburn of Tennessee, calling for China to repay $1.6 trillion in defaulted debt owed to 20,000 American families.

China has clearly taken notice, threatening to sanction me along with several of my fellow Republican senators. I wear that threat as a badge of honor.

If the Chinese government is intimidated by my efforts to hold them accountable, then I’m doing my job to protect American interests.

Joe Biden has a long history of turning a blind eye to the threat of a rising China.

Biden has continually boasted about his relationship with Chinese President Xi Jinping, and argues that China is “not competition for us” — the same country that damaged millions of U.S. jobs and said plainly that they are looking to replace us and dominate the world in their image.

Biden was wrong when he said “a rising China is an incredibly positive development” for the U.S. and the rest of the world.

He managed the Obama administration’s pivot to Asia with the hope that China would become more democratic. To say this hasn’t happened would be an understatement. Yet he and fellow Democrats in the Senate have still refused to acknowledge this fact.

My opponent, Mark Kelly, claims he understands the threat of China, but he has continued to dodge questions about his deep financial entanglements with companies tied to the Chinese government. These ties — and Kelly’s refusal to disavow them — raise legitimate, serious questions about his ability to hold China accountable.

The prospect of a Biden presidency and a Democrat-controlled Senate should concern all of us, particularly as we continue to confront the calamity of a virus inflicted upon us by the Chinese regime.

We cannot fall back into an era of complacency. If we elect weak-on-China Democrats, China will replace us on the world stage, making the United States and our allies less secure, free, and prosperous.

We can’t let that happen. 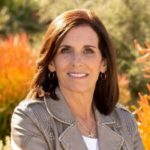 Martha McSally
Martha McSally is a U.S. senator for Arizona. She previously represented Arizona’s 2nd Congressional District from 2015-2019. She served in the U.S. Air Force, achieving the rank of colonel, and was the first U.S. woman to fly in combat and the first to command a fighter squadron.
Exclusive from Sen. McSally: I Know a Threat When I See One, And China Is the Biggest Threat We Face
See more...
Advertisement