Billionaire George Soros is backing an admitted plagiarist in a district attorney’s race in northern California, funding campaign literature that describes her as a candidate of “integrity.” Hers is just one of multiple DA races in which Soros is trying influence the election’s outcome.

The Los Angeles Times reported Soros has dropped over $2.7 million in California DA races this election cycle, and since 2014 has spent more than $16 million in 17 county races in other states. His chosen candidates have won 13 of them.

“Wealthy donors are spending millions of dollars to back would-be prosecutors who want to reduce incarceration, crack down on police misconduct and revamp a bail system they contend unfairly imprisons poor people before trial,” according to The Times.

Soros has waded into the Contra Costa County DA’s race to the tune of $275,000 backing interim Democrat DA Diana Becton.

In addition to supporting Becton, the self-described philanthropist has intervened in the DA contests in San Diego County spending $1.5 million, according to San Diego Tribune, and Sacramento County with another $375,000, The Sacramento Bee is reporting.

Becton, 66, was chosen as Contra Costa County’s interim DA last September among five applicants to the position, in a narrow 3-2 vote by the county’s board of supervisors.

The choice by the board of supervisors came despite the revelation that the former judge plagiarized significant portions of her application and unlike other candidates, including Contra Costa County District Attorneys’ Association endorsed Paul Graves, has no prosecutorial experience.

Becton is the county’s first female and African American district attorney, which Soros made a top selling point in a recent mailer sent to voters throughout the county ahead of the June 5 election to decide who will take up the seat for a full term.

The piece describes Becton as someone with “experience, integrity, and progressive values.” 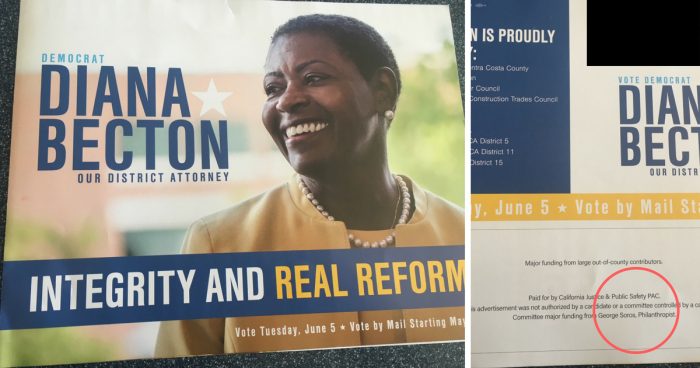 She also cut and pasted portions from neighboring Alameda County’s District Attorney’s website regarding the issue of community development.

Do you think Soros is seeking to undermine traditional American values?
Yes: 99% (177 Votes)
No: 1% (1 Votes)
Advertisement - story continues below

Other text came word-for-word from a March 1994 issue of Harvard Business Review. Even a direct quote from Dr. Martin Luther King’s “I Have A Dream” Speech made it into her application, which read, “When the architects of our republic wrote the magnificent words of the Constitution and the Declaration of Independence, they were signing a promissory note to which every American was an heir.”

In all, at least seven portions of her application were plagiarized from others’ words, which were chronicled in an anonymous letter sent to multiple media outlets.

Last September, Becton described her actions to the board of supervisors as a “mistake,” the San Francisco Chronicle reported.

“I drew liberally from all kinds of sources because I wanted to lift certain issues up,” she said. “I recognize that I should have used quotation marks when I used words of other people, and I didn’t do that. I own the mistake.”

“That is the same kind of leadership and transparency and accountability that I will bring to the district attorney’s office,” Becton added.

The editorial board for the East Bay Times backed Graves over Becton earlier this month, citing her plagiarism, in part.

“It’s the sort of plagiarism that’s unacceptable from a high school student, much less the county’s most powerful law enforcement official. But, to this day, Becton still doesn’t fully comprehend what she did wrong,” the editors wrote.

Her “mistake” is surprising, given her experience as a judge, and being a law school and college graduate. The proper citation of sources is central to the legal craft.

Aron DeFerrari — president of Contra Costa County District Attorneys’ Association — told The Western Journal he thought Becton would no longer be under consideration for the position after admitting to plagiarism.

“There is no way they can appoint somebody who plagiarized her application,” he recalled thinking at the time.

His group had endorsed Graves for the appointment and is supporting his candidacy in the election.

Graves, a Republican, is a current Contra Costa County prosecutor, who oversaw the Homicide Unit and now oversees the Family Violence Unit.

“The biggest compliment you can pay a prosecutor is to call him a grinder,” said Deferrari, who serves with Graves in the DA’s office. “Paul is a straight up grinder. There is a reason for that. This job is important. This job takes a lot of time and effort. You don’t do this job well between 8:30 to five, four or five days a week.”

“Paul Graves has demonstrated that commitment to victims of crime and he’s done so for the last 22 years,” DeFerrari added. “He is the only candidate in this election that has done that. It’s how he has earned the respect and support of every law enforcement agency in this County.”

According to his website, Graves is endorsed by over a dozen police officers’ organizations, as well as a plethora of local officials, from city council members to judges.

Becton puts Sen. Harris at the top of her endorsements list followed by various Democratic members of Congress, mayors, government and non-government labor unions, and city council members, but support from the law enforcement community is all but absent.

DeFerrari told The Journal there is a reason law enforcement groups are backing Graves over Becton.

“Her actions and her lack of commitment to this job, from the moment she submitted her application to the place we are standing today, have not earned our respect as criminal prosecutors,” said DeFarrari. “This job requires absolute commitment to fighting for victims of crime each and every day and not just Monday through Friday.”

A review of Becton’s calendar, obtained by a public records request by a Graves supporter, shows the interim DA spent a substantial amount of time away from the office during her first six months in office, particularly for someone with no prosecutorial experience.

Just weeks after being sworn in as DA in late September, Becton traveled to Atlanta for a National Association of Women Judges convention, missing three work days.

She then traveled from there to Virginia for the Women in Power and Politics event the following week. In late October, the former judge went to an event at Stanford University. In November, Becton was out of the office for two days to participate in a “Fair and Just Prosecution” conference focused on rolling back the “tough on crime” approach to law enforcement.

In a statement endorsing Becton, the Soros aligned Real Justice PAC indicated this will be top priority of the candidate.

“If elected she will make history as the prosecutor who took on mass incarceration by pushing through much needed bail reform, restorative justice programs, and an end to racial disparities in charging and sentencing,” said the group’s co-founder Shaun King.

A review of the key card access to the Contra Costa Country DA office, also obtained through a public records request, showed that Becton did not come to her office a single weekend during her first six months in office from Oct. 1, 2017 to March 31, 2018.

However, Graves was in the office over a dozen weekend days. Paul Thompson, a deputy district attorney in Los Angeles County, noted it is common for prosecutors to work weekends in the lead up to a trial.

“If we’re in trial, which happens for the typical trial attorney 6-15 weeks out of the year…weekly work hours double, meaning that we’re working nights and weekends,” he said.

Scott Alonso, the Public Information Officer for the Contra Costa County DA’s office, told The Western Journal just because Becton is not physically in the office does not mean she is not working.

“She works long hours inside the office and outside the office,” he said. “With this type of work, she’s on call 24-7. She’s in constant daily communication with her attorneys and with members of her leadership team.”

DeFerrari fears Becton is more interested in the position than the work it entails.

Two children reported missing in Missouri last year have been found in Florida. A woman has been arrested in the case.
By Jack Davis  February 7, 2023

The high school students did a bit of research about prosthetic limbs, created a design, and used a 3D printer to create the prosthetic.
By Elizabeth Delaney  February 6, 2023
Next