Facebook apparently made changes to its algorithms that allowed conservative publishers to get somewhat more equivalent exposure as liberal publishers on its platform after being called out for its disparate effect on online publications by The Western Journal, according to a new analysis.

But conservative sites are still being hit harder than liberal sites, even after six months of algorithm changes that have brought the impacts to the two groups of publishers closer to parity.

In March, The Western Journal published data showing that conservative publishers had lost significant traffic from Facebook, on a percentage basis, in February compared with January. The results of that analysis were made public on March 13.

In a new analysis using data from SEM Rush, The Western Journal looked at estimated traffic for 80 publishers from January through September 2018. SEM Rush is a “leading competitive research service for online marketing,” according to its website. The data included estimated desktop sessions referred to publishers’ websites by Facebook.

That data showed that center-left and left-leaning publishers were not as significantly affected by Facebook’s massive algorithm changes as were publishers on the right and center-right. The disparity between the effect on the two groups peaked in March, the first full month after those changes were rolled out in February.

However, that gap began to close somewhat in April, the month after The Western Journal’s original analysis was first published, and has continued to close every month since. In September, right-leaning publishers were impacted only about 10 percent more than other publishers, whereas in February, conservative publishers had been impacted nearly twice as much as the others surveyed.

Do you think Congress should investigate possible censorship by Facebook?
Yes: 98% (46 Votes)
No: 2% (1 Votes)

To conduct this evaluation, The Western Journal selected 80 publishers known to receive a significant amount of online traffic from Facebook. These publishers include traditional print or television outlets such as The Washington Post, CNN and Fox News, as well as new media outlets like Vox and The Daily Caller. (The full list of publishers appears in the chart below.)

The Western Journal then assigned each publisher a number between 0 and 100 based on research by Media Bias / Fact Check, a third-party website that analyzes publishers for political bias and places them on a continuum between “extreme left” and “extreme right.” 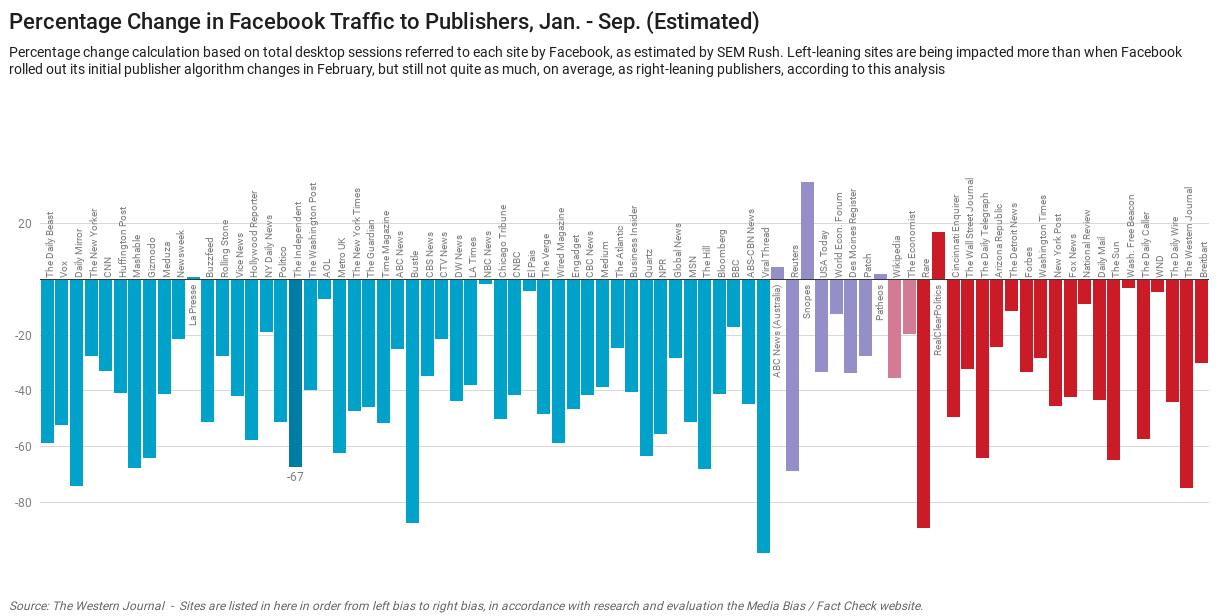 The average site from our list lost 38.45 percent of its traffic in September compared to January. Some lost more or less, and a few even gained traffic.

Related:
Facebook Ready to Nuke All News on the Platform, Reveals It's Because of a 'Cartel-Like' Entity

The most-affected site was Viral Thread, previously considered the “flagship channel” of British digital publisher Jungle Creations, which lost over 98 percent of its traffic and appears to have stopped publishing in August. No information was immediately available about how many jobs were lost when Viral Thread stopped publishing.

The least-affected site in our analysis was Montréal’s digital newspaper La Presse, which gained about 1 percent in traffic between January and September. Balancing that out, the second least-affected site was NBC News, which lost just over 1 percent of its Facebook traffic during the same period.

What remains unclear is how much of these changes are due to Facebook’s algorithm changes as opposed to other forces. For example, some conservative publishers are known to have retargeted their marketing efforts away from Facebook since the February changes, and other publishers throughout the spectrum may have joined them.

Regardless, the continued disparity seems likely to renew calls for a congressional investigation into possible censorship by the social media giant. Congress held hearings in April during which Facebook CEO Mark Zuckerburg was grilled by House members, including House Majority Whip Steve Scalise, who used The Western Journal’s previous analysis during the hearing.

On Thursday, Ohio Republican Rep. Jim Jordan renewed calls for congressional investigations into “free speech restrictions by social media companies and others,” again citing The Western Journal’s previous research as well as reports of “shadow banning” of four Republican House members by Twitter and other instances of apparent bias against conservatives by “big social media companies.”