The Western Journal conducted the poll during the first week of April targeting those affiliated with the Republican Party and those who identify as conservative through Facebook.

The survey then pulled out the 1,100 respondents who indicated that they plan to vote in the Buckeye State’s May 8 primary, which will decide the GOP nominees for the U.S. Senate and governor, among other races.

Of these respondents in the key swing state, more than 96 percent said they had a favorable view of Trump. 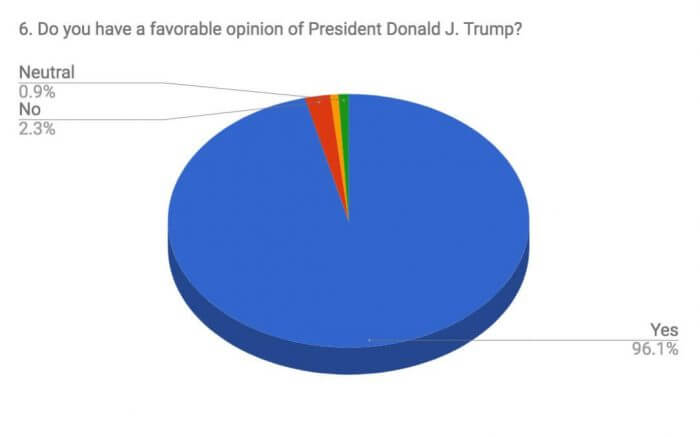 Further, 81 percent reported being better off now than they were two years ago, while 15 percent said they were not.

Ninety-eight percent believe the United States has an illegal immigration problem, which is another Trump bellwether issue.

Other statistics that play in the president’s favor were that 81 percent describe themselves as pro-life, and 26 percent had served in the military.

According to the poll, Lieutenant Gov. Mary Taylor is the clear front-runner in the race for the Republican nomination with 51 percent support, while Attorney Gen. Mike DeWine garners 17 percent and 30 percent remain undecided.

In the U.S. Senate race, nearly half of all respondents (48 percent) have yet to make a decision.

Those who participated in the survey skewed male, 64 percent to 36 percent, and older, with 78 percent being 50 or above.

The poll was conducted from April 2 – 9. Additional findings from the poll can be found here.

Virginia Rep. Donald McEachin passed away on Monday, leaving his seat vacant and to be filled after a special election.
By Abby Liebing  November 29, 2022
Next