On Jan. 5, the 2020 Golden Globe Awards once again rolled out the red carpet for Hollywood’s high society.

Still, Michelle Williams could not resist.

In a lazy sequel to her 2019 Emmys speech on equal pay, this time the actress expressed her gratefulness for abortion access. And unsurprisingly, her words set Twitter ablaze with applause and attacks from both sides of the issue.

Standing on stage pregnant, with a glimmering award grasped in her hand, Williams said, “I wouldn’t have been able to do this without employing a woman’s right to choose.”

“Women, 18 to 118, when it is time to vote, please do so in your own self-interest. It’s what men have been doing for years, which is why the world looks so much like them. But don’t forget: We are the largest voting body in this country. Let’s make it look more like us.”

As our nation looks toward the 2020 elections, Williams’ speech prompted two important questions. Unfortunately, as Gervais pointed out, celebrities are in no position to answer them.

First, what happens in a state or a nation where we vote out of “self-interest” with the goal of making the electorate “look more like us”? Second, what happens when we view children as an inconvenient obstacle to success, rather than an inspiration?

These two questions are deeply intertwined within the realm of identity politics.

When we reduce our voting decisions to nothing more than self-interest and racial or sexual representation, we create a nation where politicians are free to pander according to our race, sex and selfishness.

This means they stop viewing us as future constituents and start valuing us only for our color or sexuality. It also means that we as voters often fail to sufficiently consider whether the political views of a candidate truly work toward the common good.

The premise of Williams’ argument was this:

If we vote to make the electorate look more like us women, then they will serve own self-interest.

If pregnancy fails to serve our own self-interest, then we should be free to terminate that pregnancy with an abortion.

Therefore, protecting the abortion industry is within our own self-interest.

In the same fashion of identity politics, Williams’ speech spoke to women as a monolith — a pro-abortion block of society that seeks its own interest and wants to see more women in political power.

Williams failed to recognize that she speaks from a privileged podium, recklessly declaring that abortion is what makes her kind of success possible. It’s the same empty promise that the abortion industry has been promising for years, but has yet to fulfill.

She failed to acknowledge the millions of women who work hard to pursue their dreams and raise their children at the same time. With or without a man’s support, many single mothers still achieve success. With or without a glittering award, each day they still say “yes” to the responsibilities and challenges that come with bringing life into this world.

But Williams did not discuss making this nation a better place for the everyday mother. She did not demand we guard motherhood against obstacles that everyday women face in places like work, education and finances.

Instead, she insisted that motherhood itself is the obstacle to be obliterated when pregnancy inconveniently arises.

How timely, since Jan. 22, 1973 marks the anniversary for the Supreme Court’s Roe v. Wade decision. Williams, however, seems to be unaware that legalized abortion has been eliminating the burdens of male responsibility, fatherhood and child support payments since its very inception.

In other words, Roe v. Wade has been serving the “self-interest” of men for 46 years.

So when I go to the ballot box, I will do so in my “own self-interest,” just as Williams advises. I will vote for candidates who protect and empower my greatest self-interest: life. From the day I was conceived to the last breath I breathe, the value of my life must be upheld and protected.

But unlike she advises, I will not judge a candidate’s fitness for office based on their sex or how much they make our elected body “look like” me.

When I vote, I will continue to evaluate candidates just as I would wish to be evaluated by others: according to the content of character, actions and expertise — not by sex or color.

When I vote, I will vote as an individual, not an identity. 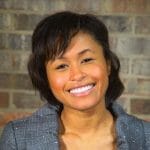 Rachel Citak
Rachel Citak is legal counsel for Citizens for Community Values, Ohio’s largest Christian public policy organization. As a black pro-life advocate, she is passionate about issues concerning human trafficking and pro-life efforts. While working as a registered lobbyist and licensed attorney in the state of Ohio, she spends much of her time at the state capitol testifying for bills that promote God’s blessings of life, family and religious freedom. Follow her on Twitter @rachelrcitak.
Feminists Voting for Abortion Are Doing Men and Themselves a Favor, Not Women
See more...
Advertisement

This Louisiana teacher is facing multiple counts of child pornography distribution and could be facing years in prison.
By Abby Liebing  August 10, 2022

Government officials said that the FBI raid at Trump's home in Mar-a-Lago was not originally meant to spark a political storm.
By Abby Liebing  August 10, 2022

Watch: Even Blue Cities Have Had Enough of Fauci, Gets Booed While Throwing First Pitch at Game

Given Fauci's record, these fans should not be blamed for their lack of excitement about seeing him at a sporting event.
By Grant Atkinson  August 10, 2022

'I've been doing this 22 years and this is a highly unusual and unique case,' a police lieutenant said of the allegations.
By Jack Davis  August 10, 2022
Next