My last photo of my beautiful father…telling him I love him on May 22, 2016 pic.twitter.com/NcQHgPSIIF

A few days after Muhammad Ali’s death on June 3, 2016, his daughter posted what is believed to be the last photo taken of him while he was alive. Ali retired from boxing in 1981, and in 1984 was diagnosed with Parkinson’s syndrome, which his doctors believed to be the result of the many blows to the head he took while fighting. He was hospitalized on June 2, 2016, because of a respiratory illness. Although Ali’s condition was listed as “fair,” he would die the following day.

This photo was taken at Lucy’s last public appearance, the 61st Academy Awards on March 29, 1989. She would undergo open-heart surgery on April 17, and returned home after a few days in the hospital. It broke Lucy’s heart when she learned she wouldn’t return to her old bedroom, because stair climbing would be too difficult for her; she did not want to live in a makeshift bedroom downstairs and didn’t want to be treated like an invalid. The next morning, Lucy’s surgically repaired aorta ruptured, and unfortunately she could not be saved.

Taken at the Dr.’s office on June 22, 2007. After the appointment, Benoit would kill his wife and son, then take his own life. Benoit was a star in World Wrestling Entertainment, and was recognized as one of the only performers who would allow other wrestlers to hit him in the back of the head with steel chairs. Repeated untreated concussions could have been the reason for his violent turn, doctors observed that Benoit’s 40-year-old brain resembled that of an 85-year-old Alzheimer’s patient’s at the time of death.

Shortly after this photo was taken on the set of Wagons East!, John Candy would pass away in his sleep from weight-related health issues. The film was released five months after Candy’s death and body doubles were used to film the rest of Candy’s scenes.

This photo was taken on March 3, 1963, during Patsy Cline’s last ever performance. Two days later, she would die in a plane crash at only 30-years-old.

The Day the Music Died

The Big Bopper, Richie Valens, and Buddy Holly pose together before boarding a flight that would end in one of the most famous plane crashes in history. 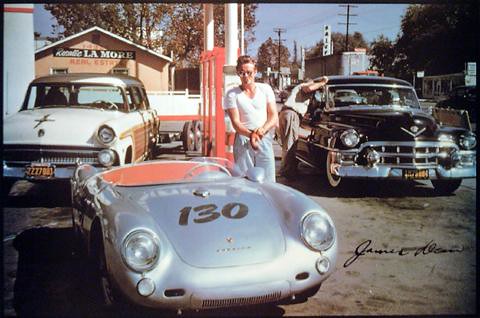 James Dean died on September 30, 1955 at the age of 24. Here he is earlier that day, hours before dying in a crash while driving the car he’s standing next to.

Tammy Faye was one of the founding members of The 700 Club. She died on July 20, 2007, after battling cancer for 11 years. The previous day, she appeared on Larry King Live to say goodbye to her fans.

This is the last known photo of Anne Frank, taken an estimated two months before she and her family went into hiding. Unfortunately, no known photos exist of the Frank family in hiding.

In 1997 George Harrison was diagnosed with throat cancer, which he claimed to have been brought about by years of smoking. Radiotherapy was successful, but in 2001 it was revealed that Harrison was now suffering from lung cancer that had spread to his brain. He passed away on November 29, 2001, at the age of 58. The above photo was taken to be included in an insert booklet for an album that he had written a song for.

This photo was taken one day before Hendrix’s death in 1970. He was 27 years old.

Audrey Hepburn died of appendiceal cancer on January 20, 1993. She was 63 years old.

In 1947, Curly Howard suffered a stroke while filming The Three Stooges’ short movie Half-Wits Holiday. His brother Shemp rejoined the Stooges with the promise that Curly would take his spot back once he had recovered, but Curly’s condition never sufficiently improved. In 1948, Curly filmed what was supposed to be a scene for the short Malice in the Palace, where he played an irate chef. Because of Curly’s condition, his performance was not deemed good enough and the scenes involving Curly were cut. The footage from that scene is considered lost, and this still image is all that remains from Curly’s final performance. Curly is on the left, holding Larry Fine, as Curly’s brothers Moe and Shemp Howard look on. Curly died in 1952 at the age of 48 after suffering several more strokes.

A few hours after this image was captured, Steve Irwin would bleed to death after being stabbed in the chest by a Stingray. He was being filmed for television, but all copies of the footage were destroyed at the request of Irwin’s family after police were able to view them. As a result, a short clip shot from a nearby boat is the last remaining footage of him.

This photo was taken of Jackson two days before his death, while rehearsing for his comeback tour, “This is it.” On June 25, 2009, at the age of 50, Jackson stopped breathing while attempting to sleep under the care of Conrad Murray, his personal physician.

At 5:00 in the evening on December 8th, 1980, John Lennon and Yoko Ono walked out of their apartment to go to the recording studio. This photo is the last clear image of Lennon and was taken when Lennon stopped to sign an autograph for Mark David Chapman. Chapman waited around for six hours until Lennon and Ono got back from recording, then shot Lennon four times.

The only existing photo of Lincoln during his second inauguration and the last known photo of him before his assassination.

This is the last picture of Steve Jobs taken before his death. Kind of haunting.

The last known photo of the man behind Apple. Taken just before his death of pancreatic cancer at age 55.

Taken weeks before his death on Christmas Day, 1995. Dean Martin suffered from lung cancer and died of a respiratory failure at age 78.

Here is Groucho during the last public appearance of his life, the 1974 Academy Awards. He was accepting an honorary award on behalf of all of his brothers, as well as himself. He said “I wish Harpo and Chico could be here to share it with me, this great honor.” Groucho would pass away in 1977 at the age of 86 after a battle with pneumonia.

Freddie Mercury died of complications from AIDS in November of 1991, not having confirmed until the day before his death that he had the disease.

McCandless hitchhiked to Alaska in April of 1992 to prove that he could live off the land, and wasn’t seen again until August of 1992, when hunters found his decomposing body inside of an abandoned bus that was being used as shelter. McCandless’ life and adventure to Alaska has been covered in numerous books and documentaries. The above photo was found as an undeveloped photo on film McCandless was carrying at the time of his death.

Posted by Marilyn Monroe Forever In Our Hearts on Monday, August 3, 2015

Monroe poses with pianist Buddy Greco just five days before her death in 1962. According to reports, this is just one of many photos taken that day, but apparently most of them were kept in a vault in the World Trade Center and destroyed during the 9/11 terrorist attacks.

Jim Morrison’s final picture was taken on June 28th, 1971, while sitting next to his girlfriend, Pamela Courson. A few days later he would die of heart failure while in the bathtub at his apartment. It is suspected that a heroin overdose was the cause of his heart failure, since he was only 27-years-old.

This still is taken from an interview that Orbison gave on the night of his last concert. He performed on December 4th, 1988, then died two days later. He spent the day playing with model airplanes with his son and ate dinner with his mother, then had a heart attack that evening. He was 52.

This photo of Elvis Presley was taken shortly after midnight on August 16, 1977. About twelve hours later The King is found dead of heart failure in his master suite bathroom at Graceland.

Prince was photographed in all black outside of a pharmacy near his home in Minnesota just hours before his death. People inside the drug store reported that Prince was much more “frail and nervous” than usual.

This photo was taken on the last night of his life, literally minutes before Tupac was shot while sitting in that very seat. He would die a few days later as a result.

In 2001, Marco Siffredi became famous as the first person to complete an entire snowboard descent of Mount Everest. This photo was taken in 2002, when Siffredi climbed the mountain again, determined to snowboard down a different, more dangerous passage. The two people he was with pleaded with him to not descend down the mountain after only an hour of rest, but Siffredi ignored them. On the way down the mountain, the two other men lost sight of Siffredi and could not pick up his tracks. Siffredi was never seen again, and his body has not been recovered.

Mickey Rooney during his last ever public appearance, the 2014 Vanity Fair Oscars party. A star during ten different decades, Mickey Rooney’s filmography stretches from 1927 to 2015.

Six weeks prior to the above photograph being taken, Ruth’s iconic number three was retired by the New York Yankees. Ruth would pass away at age 53 less than three weeks after this picture was captured.

Paul Walker died in a car accident during November of 2013 at age 40. Here he is 30 minutes before his death, riding in the car in question.

The star of Willy Wonka & the Chocolate Factory, Blazing Saddles, and Young Frankenstein passed away in 2016 from complications of Alzheimer’s disease. He had been diagnosed with the disease three years prior but kept it a secret as not to sadden his fans. According to his family, Wilder died while listening to “Over the Rainbow” by Ella Fitzgerald.

Jane Wicker, a 45-year-old mother of two was performing as a wing walker at a 2013 Ohio air show when the plane she was performing on went down, presumably because of pilot error. Both Wicker and the pilot died instantly. Here she is after realizing the plane was probably going to crash, waving goodbye to her fans.

Robin Williams uploaded this photo his his Instagram account on July 21, 2014. He would commit suicide on August 11, 2014.

Amy Winehouse won an incredible five Grammy awards in 2008. This photo of her was taken on July 12, 2012. Eleven days later she died of alcohol poisoning at the age of 27.

The legendary musician gave one final interview before his death on December 4th, 1993. Friends and family surrounded him as prostate cancer took his life just days before his 53rd birthday. Rolling Stone has rated him the 71st greatest artist ever, and the 22nd best guitarist ever.

Outside of work, Ryan loves to play chess, sports, and video games; usually while smoking a cigar. He is a proud bird-owner and aquarium aficionado, and always jokes about needing concealed carry permits for his fists, despite only having been in one fight in his life and losing quite badly. His claim to fame is having possibly been the worst NCAA baseball player in the country, riding the bench for a DIII team that went 3-31. He loved every second of it.

Birthplace
Western New York
Education
A.S., Communication, Jamestown Community College
Location
Anthem, Arizona
Languages Spoken
English, barely. Even worse at Spanish.
Topics of Expertise
Video Games, Sports, Romance, Chess, E-Commerce, Okay not Romance
Fill Their Stocking with Second Amendment Gear This Christmas
The 9 Best Trump 2020 Products for the Most Important Election of Our Lives
176,000 People (and Counting) Shared a Photo of Our Shirt
Why Is Mainstream Media Ignoring the 'Pandegnomium'?
'America: Love It or Leave It': Congregation Upset over Pastor's Sign Made Their Decision - What's Yours?
See more...