Let’s be honest with ourselves: If the left promises the uninformed public enough free things and its candidate beats President Donald Trump in the 2020 election, Americans could be in for a rough road ahead.

Free health care for illegal immigrants that I’m going to pay for? No thanks.

Promising trans people access to all the abortions they could ever dream of? That’s weird, don’t clap for that.

Socialism? I don’t care if you are trying to pass it off as some form of “democratic socialism,” socialism by any name is socialism, and America doesn’t want it. It won’t work in America, because it has never worked anywhere. China? Some of the least free citizens in the world. Denmark? Highest taxes in the world. Cambodia? The government killed between 1.6 million and 1.8 million of its own citizens over a three-year period. Venezuela? It sent tanks to run over and kill its own citizens who were protesting against bread lines running dry.

2020 represents a battle that we have to win. Here are nine attention-grabbing products that can help us spread the word and do just that. 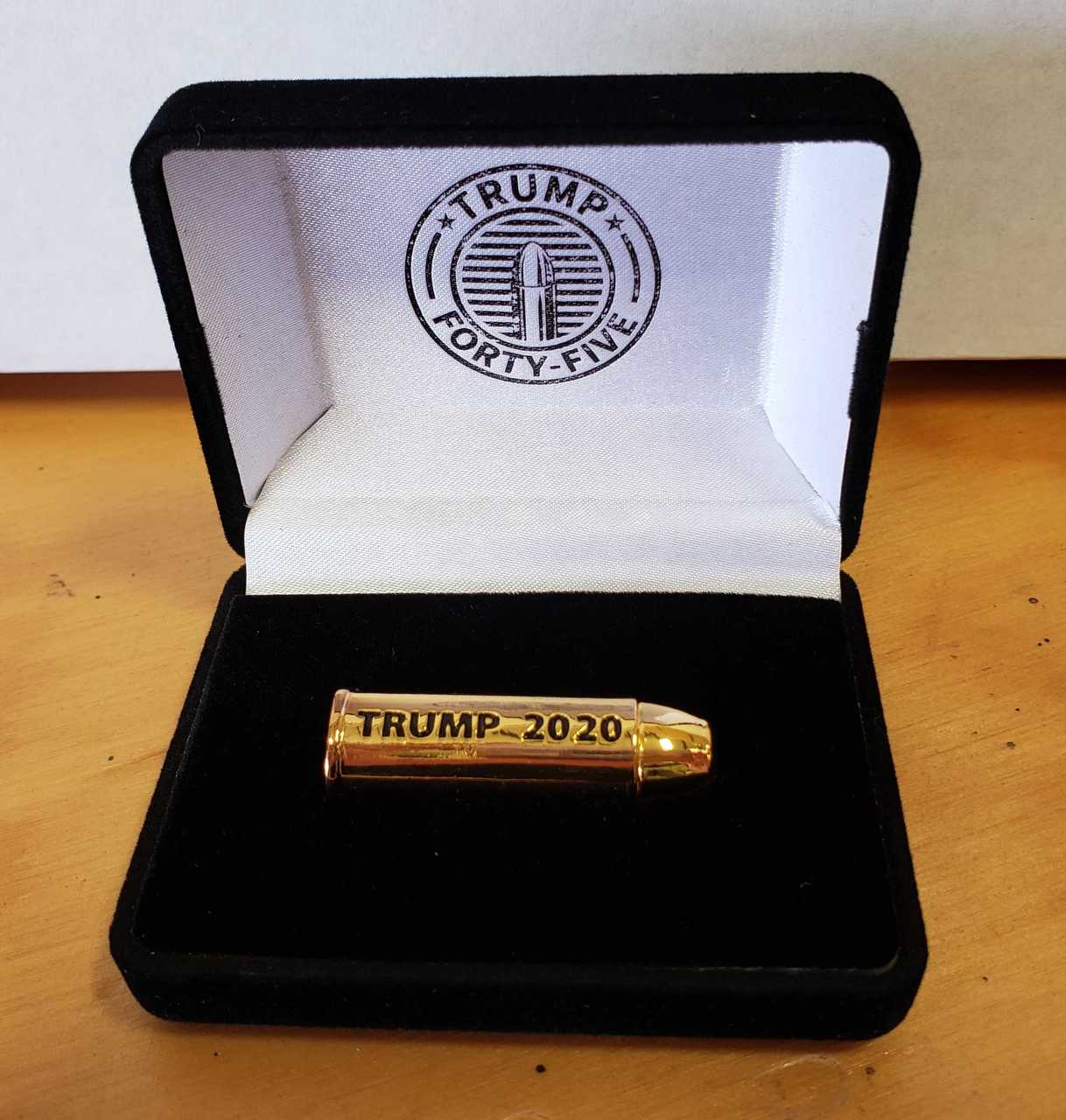 Donald Trump is just as proud to have been called a “deplorable” as you and I are, so why not honor him in the most logical way possible? Laser-engraved with an exact replica of his signature, this cartridge comes in a classy folding felt box adorned with a new “Trump Forty-Five” logo.

This gold Trump 2020 cartridge is an alternate version of PatriotDepot.com’s best-selling product ever, the Trump .45 Caliber Silver Cartridge! 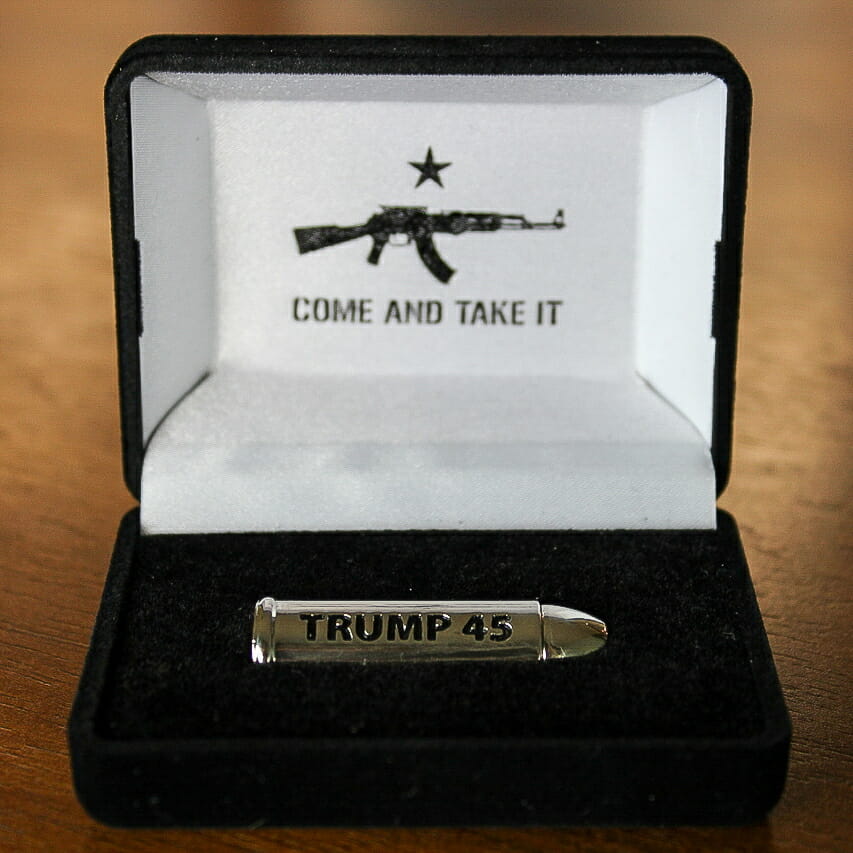 Whether this is a display piece for your mantel or desk or a gift for somebody, there’s no doubt it will inspire conversation from anybody who sees it — whether they love you or hate you for it.

Related:
4 Tales All Conservatives Can Get Behind - And They're Found in Video Games

It’s perfect for a cold day out on the slopes or just a walk to the grocery store on a winter’s day.

Have you ever been taking a shot of your favorite beverage and thought, “How can I look more badass and show my American pride when I’m drinking?” We’ve got an answer for you: our Trump 2020 30mm shot glass.

These are made right here in America from a real 30mm shell casing fired by a U.S. military A-10 Warthog. Each casing is inspected, cleaned and professionally anodized in red. These shot glasses are completely safe to drink from and contain no chemicals or toxins.

We know the president doesn’t drink. That’s why this shot glass is a double — so you can take his for him! 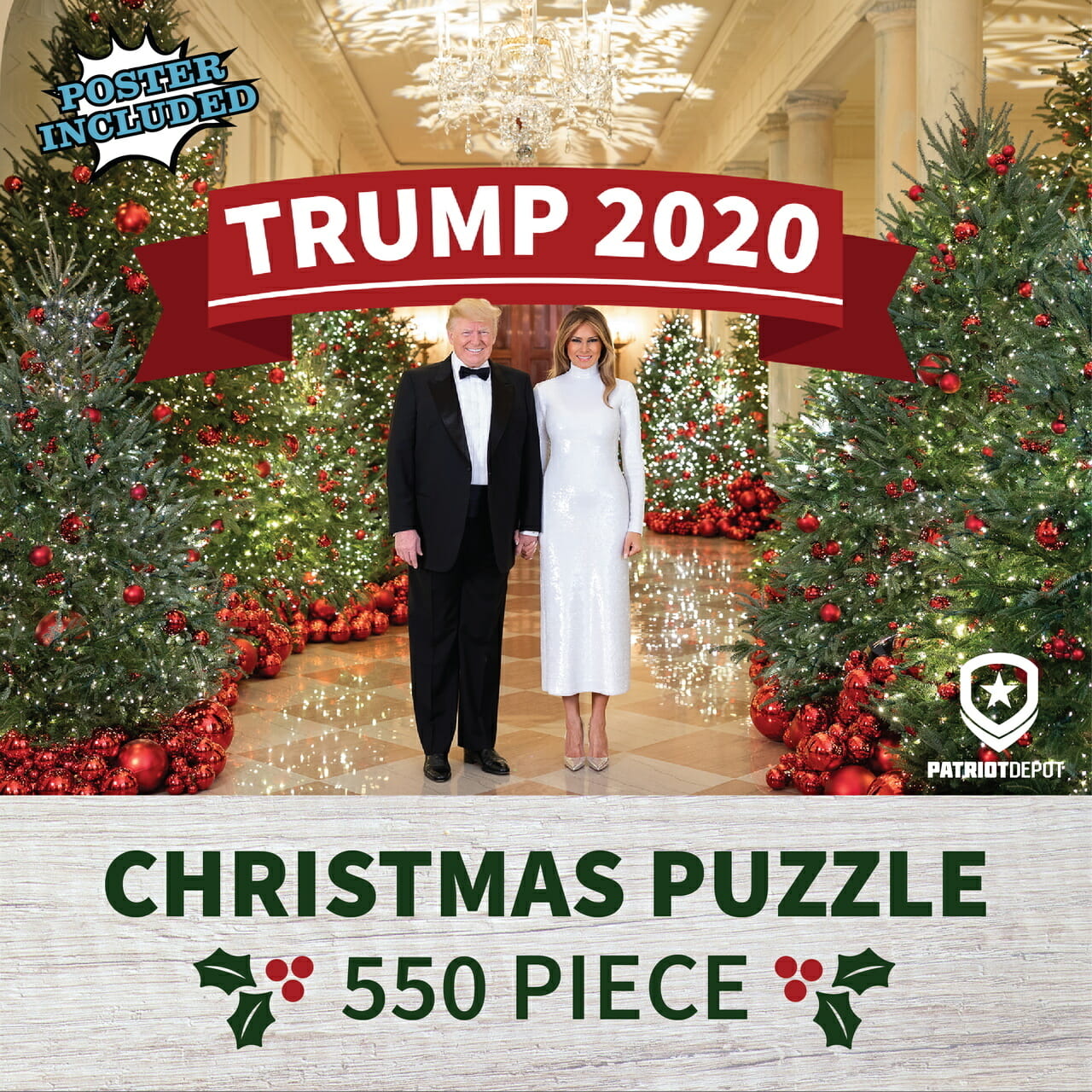 This jigsaw puzzle featuring the president and first lady Melania Trump in their White House Christmas portrait comes with a free poster to use as a guide while you’re putting the puzzle together and then hang up as decoration once you’ve completed the puzzle.

It’s a great way to pass time by yourself or to bond with friends and family. Enjoy hours of wholesome American good times while you’re putting together this puzzle from Patriot Depot. 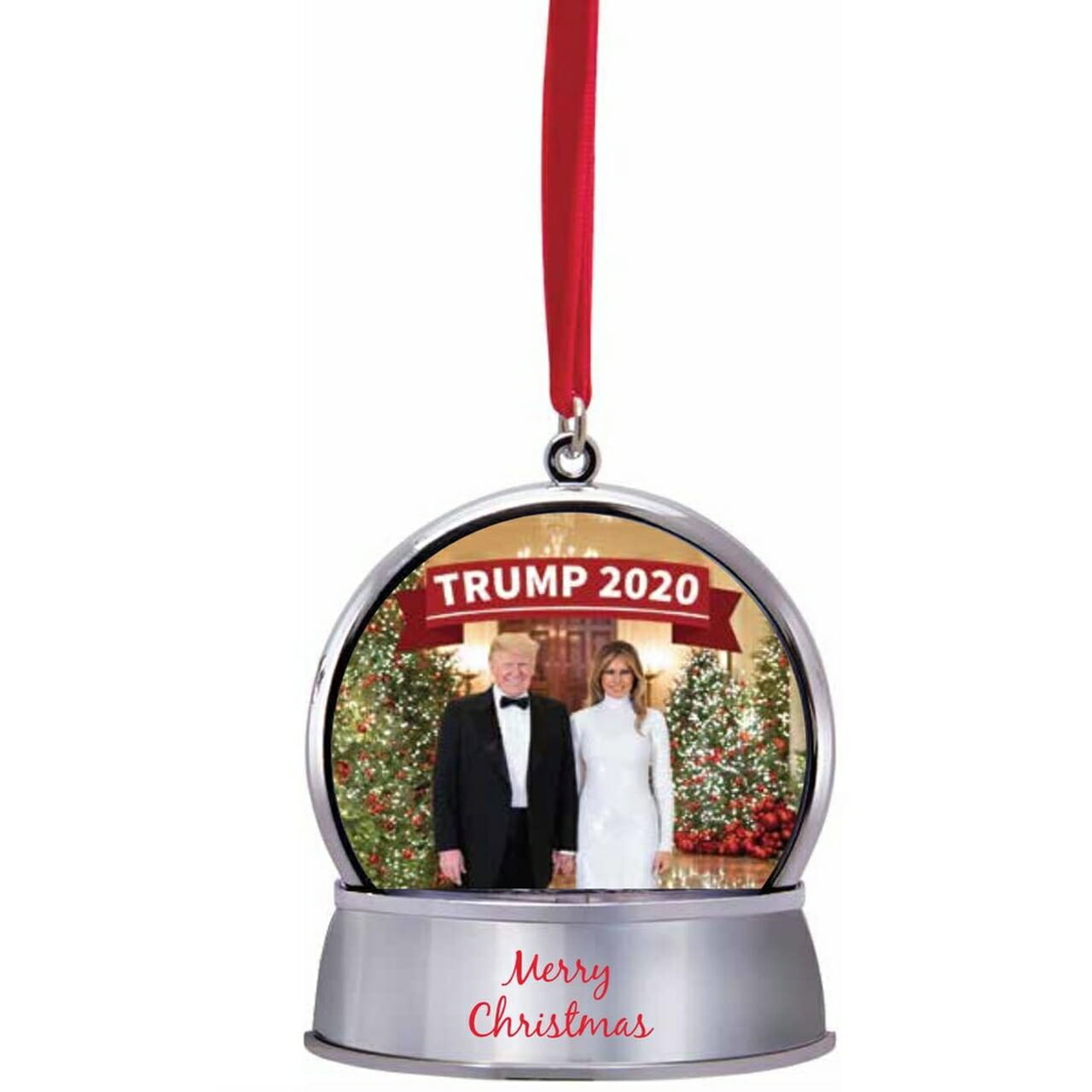 If you’re not afraid to say “Merry Christmas” and you’re happy that our president isn’t either, this Snow Globe Ornament featuring Donald and Melania Trump is for you! You can either set it on a table or desk or attach the included ribbon to hang it on your Christmas tree.

It even features a magnet on the back, just in case you want to put it somewhere else.

Reviews speak for themselves, and this particular product has a 96 percent four- and five-star review rate on Amazon, which shows you’re dealing with a very high-quality product. This flag is printed on both sides so that you can display it in whichever direction you want. 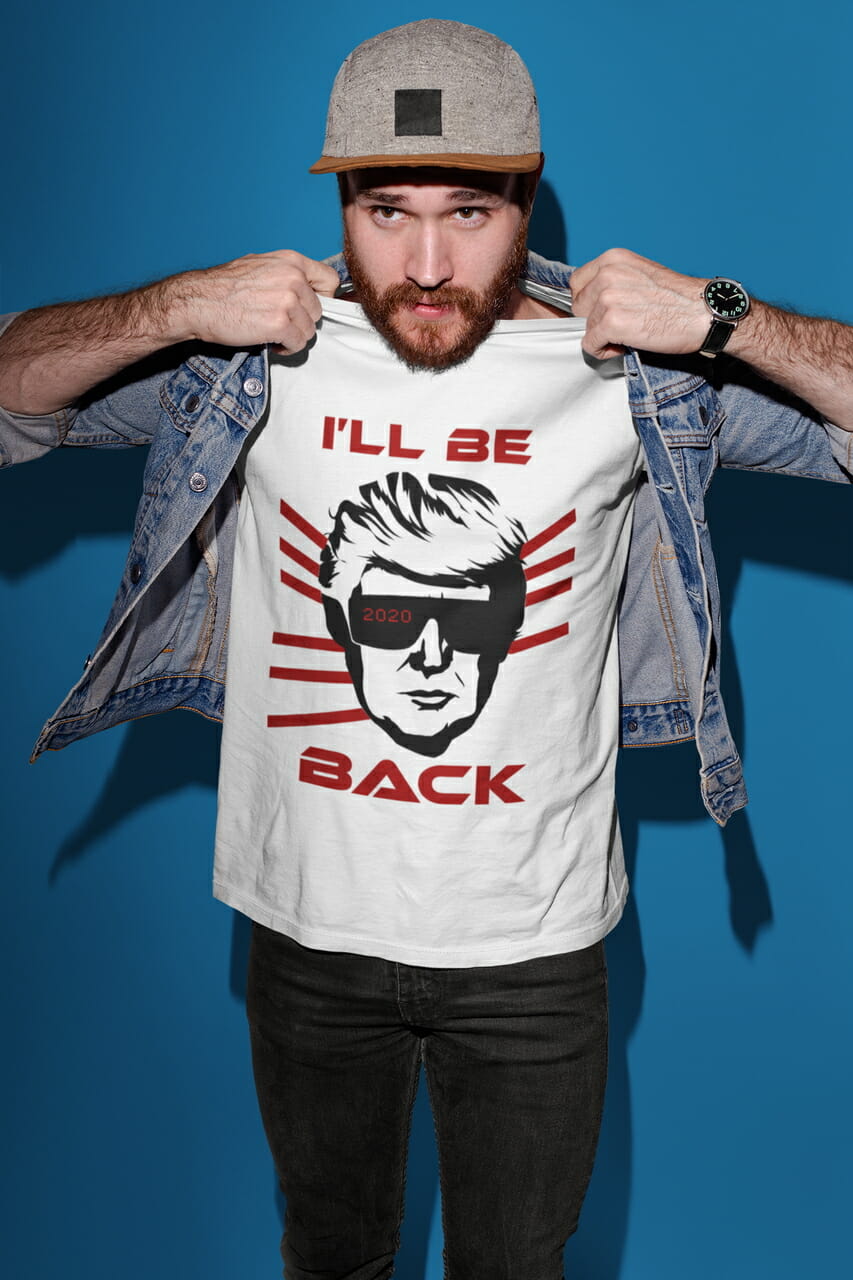 With the excitement over the newest “Terminator” movie, now is the perfect time to be rocking this tee.

The president has three simple words he wants America to hear: “I’ll be back.” Just like Arnold Schwarzenegger held his promise to return countless times in the films, the Trumpinator is promising America he’ll do the same. Say “Hasta la vista, babies” when the liberals start crying after they see this amusing T-shirt.

This Terminator-style T-shirt is great for those who don’t want the machines or the Democrats taking over. 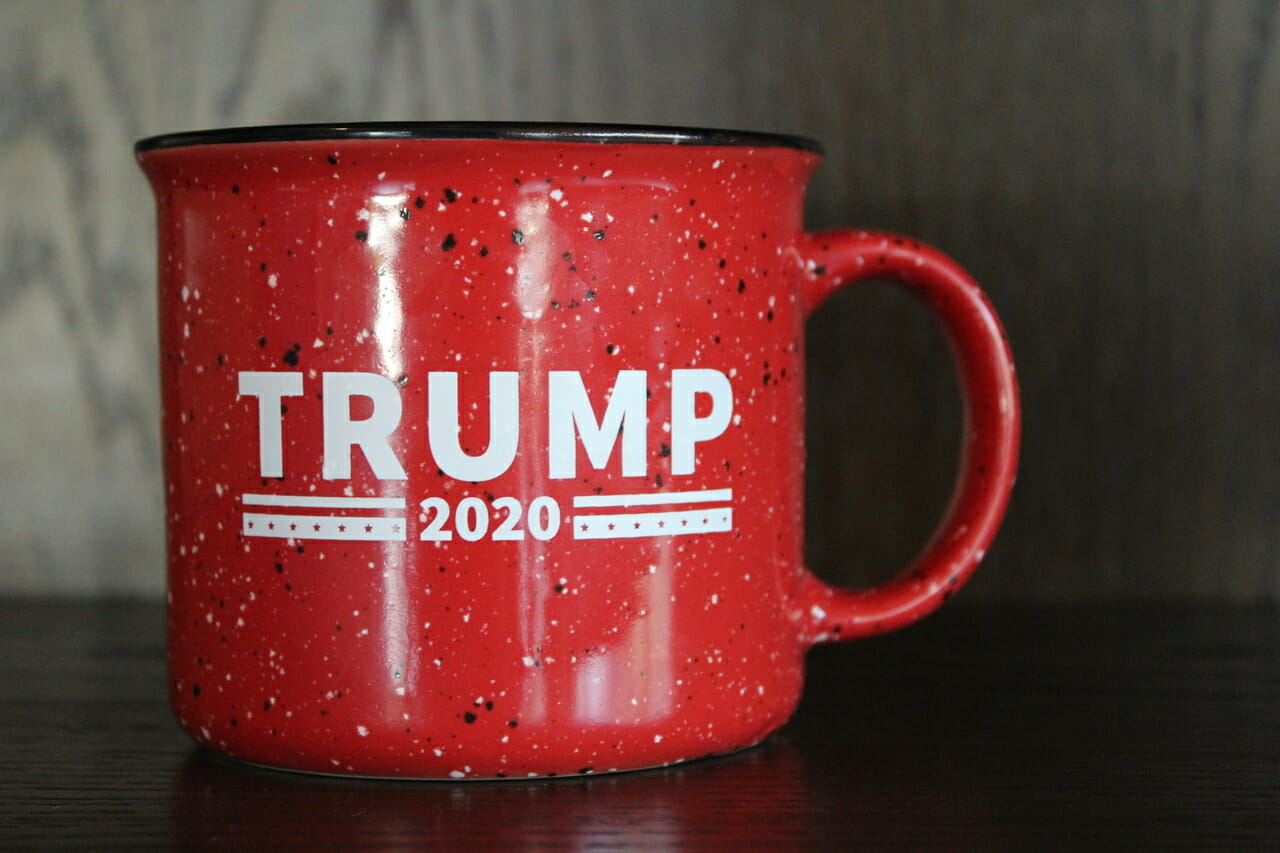 Don’t you just love the taste of victory in the morning? That will be the flavor of your coffee if you drink it out of this Trump 2020 Camper Mug. It will match your red hat and gives you a great way to make a strong statement as you start your day.

This ceramic mug, which holds 15 ounces of your favorite beverage, is a bold reminder of the great things President Trump is doing and how much great he’ll do in the years to come.

If you have any coffee- or tea-loving conservatives in your life, this mug would make their day! 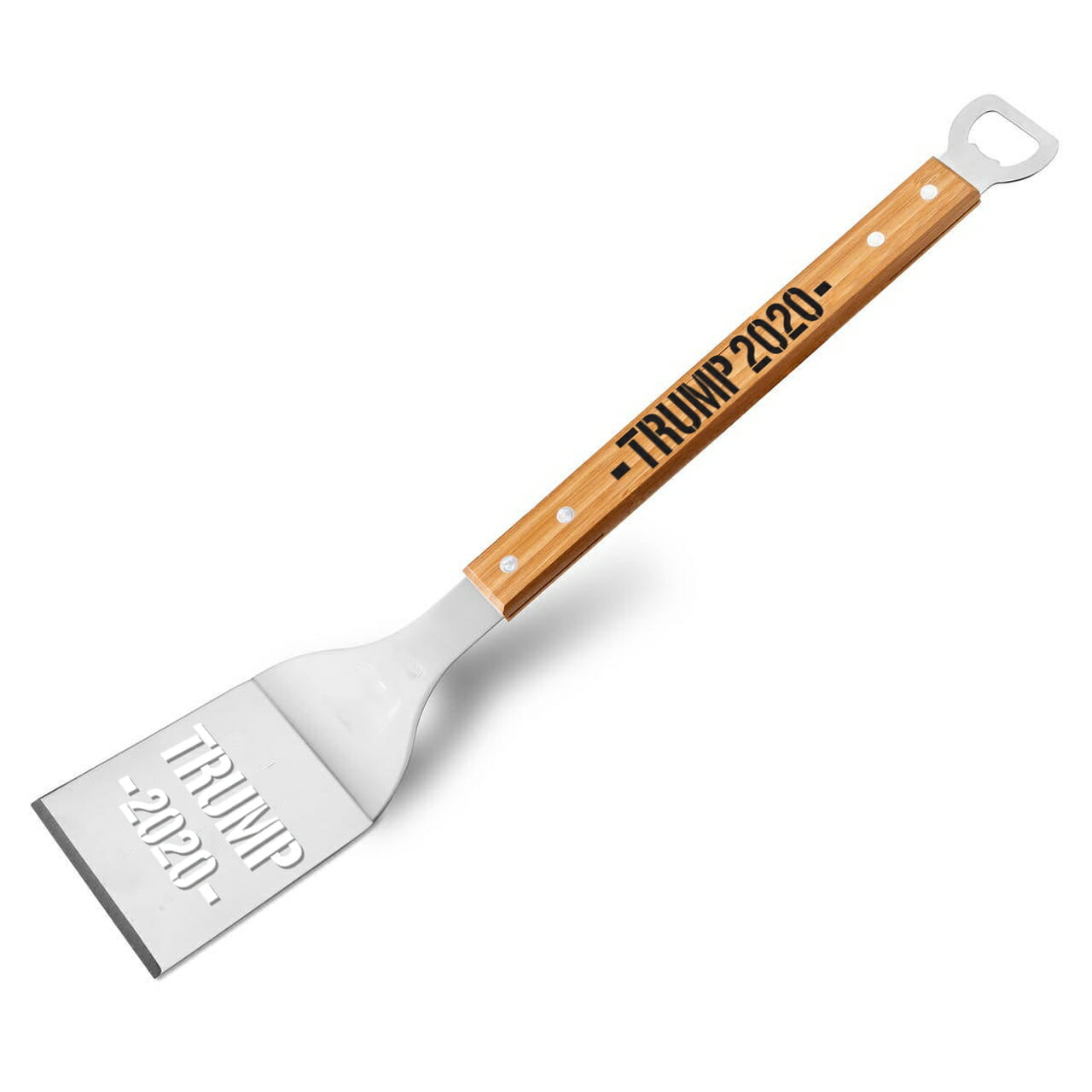 In honor of the grill marks the president is about to leave all over the Democratic nominee in the 2020 election, we want your backyard barbecues to be as patriotic as possible.

“Trump 2020” appears on the handle and is also laser-carved into the spatula. On the non-burger-flipping end is a durable bottle-opener, great for popping open whatever beverage you enjoy with your grilled goods.

Outside of work, Ryan loves to play chess, sports, and video games; usually while smoking a cigar. He is a proud bird-owner and aquarium aficionado, and always jokes about needing concealed carry permits for his fists, despite only having been in one fight in his life and losing quite badly. His claim to fame is having possibly been the worst NCAA baseball player in the country, riding the bench for a DIII team that went 3-31. He loved every second of it.