Georgetown University is standing behind an anti-Trump professor who called for GOP senators backing Supreme Court nominee Brett Kavanaugh to die “miserable deaths” and then be “castrated” and “fed to swine.”

Over the weekend, Dr. Carol Chistine Fair, an associate professor of security studies, tweeted, “Look at thus chorus of entitled white men justifying a serial rapist’s arrogated entitlement. All of them deserve miserable deaths while feminists laugh as they take their last gasps. Bonus: we castrate their corpses and feed them to swine? Yes.”

She included video of Sen. Lindsey Graham growing very agitated with Democratic colleagues on the Senate Judiciary Committee last Thursday for engaging in “the most unethical sham since I’ve been in politics,” as they seek to derail Kavanaugh’s nomination. 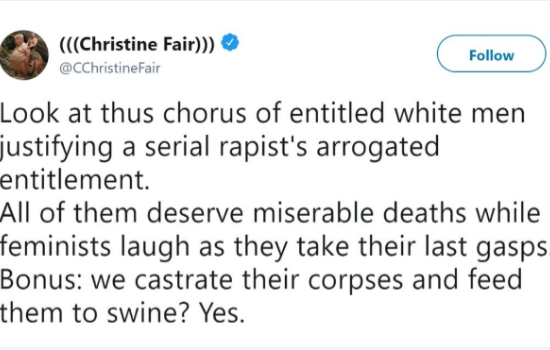 Graham raised his voice in unmistakeable anger, saying, “If you wanted an FBI investigation you could have come to us. What you want to do is destroy this guy’s life, hold this seat open and hope you win in 2020. You’ve said that! Not me!”

The professor called the hearing looking into sexual assault allegations made by Dr. Christine Blasey Ford a “GOP sh–show.”

University spokesman Matt Hill replied by email: “The views of faculty members expressed in their private capacities are their own and not the views of the University. Our policy does not prohibit speech based on the person presenting ideas or the content of those ideas, even when those ideas may be difficult, controversial or objectionable.”

He added, “While faculty members may exercise freedom of speech, we expect that their classrooms and interaction with students be free of bias and geared toward thoughtful, respectful dialogue.”

In addition to calling for GOP senators to die miserable deaths, Fair also tweeted, “I’m completely triggered in the clinical sense. To see white men implicitly aiding with a clear belligerent has motivated more rage than I can articulate.”

She added in another, “Nothing makes woman haters sh– themselves like women like me. I am that feminist @TuckerCarlson warned you about. I am coming after your arrogated privileges to abuse women and minorities and take away our rights. Make no mistake.”

In further tweets, the professor indicated that she was the victim of sexual assault. “I will use words to make you as uncomfortable as I am,” she wrote on Monday.

A Twitter user replied to one of Fair’s posts writing, “You have a very serious mental disorder. You are full of hate, spite, & anger. I imagine that you are also delusional to the point where it would be impossible to have a civil conversation with you. You’ve got it bad. Please get some help.”

The professor responded, “Case in point. A woman who says enough of the rapacious f—kery is called ‘delusional.’ Yes. We have heard this before and these insults are un-moving. You say this sh– because I’m correct and you fear how many others agree with me.”

He added, “(Georgetown University) President (John) DeGioia should immediately issue a statement condemning the tweet (calling for the death and castration of GOP senators), and Prof. Fair should not be permitted in the classroom ever again.”

A current Georgetown student, who wished to remain anonymous, told CR, “As a student applying to this school, I wouldn’t have dared use that kind of language on a social media platform, especially surrounding a sensitive and controversial issue. Georgetown wouldn’t have admitted me if they had seen stuff like that.”

“I don’t think people that Georgetown actually employs should be held to a significantly lower standard. And clearly, any of her students that see this rant are going to feel threatened if they have opinions that differ from hers,” the student added.

In response to a request for comment from CR, Fair wrote, “There is a war going on against women and you, and your despicable herd of so-called journalists seeking to protect male privilege and shame women for our victimization or our rage are complicit in this war.”

According to CR, the professor described the blog as: “This is where I post snarcastic missives based upon the sh– men (and sometimes woman-hating women) say to me via email, voicemail and comments ‘deposited’ on my various social media like celestial droppings of stupidity.”

These five Republican dissidents could bring an end to Kevin McCarthy's plans to be elected Speaker of the House.
By Richard Moorhead  November 28, 2022

Arizona County Refuses to Back Down, Outright Rejects Certification Deadline with 47k Votes

Prior to the election, the county board had voted to conduct a full hand count audit after the election over concerns about voting machines.
By Randy DeSoto  November 28, 2022

The FBI has made an announcement about remains found in a Georgia landfill as police hunted for the body of a missing 20-month-old boy.
By Jack Davis and    November 28, 2022

Musk also confirmed that Apple has threatened to withhold Twitter from its App Store. Free speech is like kryptonite to progressives.
By Elizabeth Stauffer  November 28, 2022

Tiananmen Moment: Lone Woman Stands Firm Against Chinese Police Line, But This Time the Aftermath Is Caught on Camera

The way that the Chinese police responded to this woman shows that the CCP is very worried about these protests.
By Peter Partoll  November 28, 2022

CNN's PR department took to Twitter to fact-check a post from Elon Musk. Only problem was, they were fact-checking a meme.
By Bryan Chai  November 28, 2022

Four people are dead after a Virginia man is accused of taking a teen he met online after her family was killed and their house set ablaze.
By Jack Davis  November 28, 2022

Apple changed the AirDrop file sharing function on the iPhone in mainland China as protests erupt over the country's COVID lockdown policies.
By Randy DeSoto  November 28, 2022
Next