It’s a lesson in lynching even liberals should be able to learn.

A retired Chicago firefighter who was accused on social media as a man who wielded a fire extinguisher as a weapon during last week’s violent incursion in the nation’s Capitol has found out first-hand how ugly the brave new world of internet detectives can be.

And it’s a reality that sounds more like totalitarian China than the United States of America. 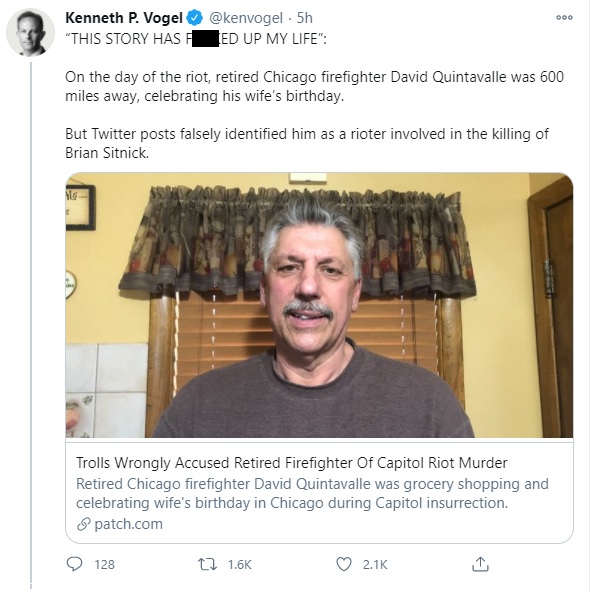 According to Patch, David Quintavalle’s life was thrust under a social media microscope after the federal authorities released a picture of a man with a fire extinguisher that has been cited in the death of Capitol Police Officer Brian Sicknick.

(Whether Sicknick’s death was actually related to a blow from a fire extinguisher is actually open to question. That story keeps getting repeated in media reports, which cite two unidentified sources, but no official cause of death has been released and members of the officer’s family have made public statements that at least raise doubts about it.)

The photo was of a middle-aged white man wearing a knit cap with the initials “CFD” on it.

Feds release photo of MAGA rioter they want to question over the murder of Capitol cop Brian Sicknick who was hit in the head with a fire extinguisher. ⁦@FBI⁩ ⁦@FBIWFO⁩ ⁦@NewYorkFBI⁩ ⁦@FBILosAngeles⁩ ⁦@FBIMostWanted⁩ https://t.co/ilJb5MoWgX

Quintavalle told Patch that a social media user in British Columbia somehow matched the photo with an old picture of him taking part in a demonstration regarding scoring on the Chicago Fire Department’s lieutenant’s exam and decided she’d found the suspect.

“And the ball started rolling” he told Patch. “Everybody started saying, ‘Here’s the guy.'”

According to Patch, Quintavalle is not on social media so he had no inkling he was being investigated by armchair detectives until a friend alerted him.

By then, self-righteous snoops had started unearthing details of Quintavalle’s life, like the fact that his son is a police officer. (One deleted tweet observed that the “irony would be just too much” if Quintavalle really was the man who threw the fire extinguisher.)

Another social media stranger found a post by Quintavalle’s estranged brother, according to Patch, that derided Quintavalle as a “bum” — putting family dirty laundry on a very public line.

Quintavalle began getting threatening phone calls at his home, Patch reported. The Chicago Police Department ended up posting a squad car outside for security.

Related:
Adam Schiff's Attempt to Play the Victim Blows Up in His Face When People See Right Through His Act

The problem for all those sleuths was that they had the wrong man.

The man in the photo is bearded. Quintavalle used to wear a beard, but told the outlet he shaved it before Christmas. More to the point, he was around 700 miles from Washington on Jan. 6, celebrating his wife’s birthday, and had the grocery receipts to prove it. (According to Patch, Quintavalle’s attorney has provided that evidence to the FBI.)

Finally, according to a report Thursday in The Philadelphia Inquirer, another man has been arrested for allegedly throwing a fire extinguisher during the riot, though the Inquirer points out that it was not the fire extinguisher discussed in relation to Sicknick’s death.

The Inquirer identified that man as Robert Sanford, a retired firefighter with the Chester Fire Department in Pennsylvania.

And now, as the social media caravan moves on its destructive path, Quintavalle is left with its remnants.

But this was in the court of public opinion, in an era when liberal viciousness is basically unbound, and it wasn’t so much a miscarriage of justice as an almost predictable event in an increasingly dictatorial progressive culture.

The fact that the Capitol riot involved Trump supporters made anyone even close to associated with it fair game for the progressive posse. The fact that the establishment media and Democratic politicians have stoked a national witch-hunt atmosphere made tracking down anyone and everyone involved in the incident a top priority for any self-respecting progressive.

The fact that social media giants like Twitter and Facebook have dropped even the fig leaf of neutrality on political questions has to make liberals feel like they’re doing God’s own work on their home turf when it comes to the cyber world.

And, frankly, the fact that the case involved a middle-aged white man no doubt played a role in how willing utterly ignorant social media users were to believe the worst of the first name that came to light — no matter how thin the “evidence” might be.

This isn’t the behavior of men and women who believe in the inalienable rights of the individual. This isn’t even the behavior of American liberals in their previous incarnations, when organizations like the American Civil Liberties Union took their beliefs in individual expression so seriously that the ACLU represented a neo-Nazi group in 1978 when the group was barred from marching through a Chicago suburb with a large population of Holocaust survivors.

(It was a rare, and welcome, return to that form when the ACLU blasted Twitter and Facebook censorship last week, but good luck finding that kind of principle — that kind of commitment to free speech — on the left today.)

This is the cowardly, cringing, snooping and snitching behavior more to be expected of the inmates of nation-sized prison camps, like North Korea, or the East Germany of communist rule.

The difference is, East Germans were and North Koreans are oppressed by their totalitarian governments. American liberals are doing it to themselves — and appear bent on doing it to their fellow citizens.

The blatant censorship by Twitter and Facebook of Hunter Biden stories in the lead-up to the Nov. 3 election was a taste of what progressive tyranny looks like on the scale of national politics — and Americans should learn that lesson well.

The witch-hunt nightmare that enveloped David Quintavalle is an example of what can happen on the scale of a personal life, if an individual is believed to have the wrong kind of politics, the wrong gender and the wrong skin color.

That kind of vicious, unaccountable cruelty can go in any direction, a sword with a limitless number of edges. Today, the mobs are howling for Donald Trump supporters or even those who look like them.

And that’s a lesson in lynching even liberals should be able to learn.

There's a report that should be raising eyebrows when it comes to who exactly helped free WNBA star Brittney Griner.
By Bryan Chai  December 9, 2022

Defensive end Henry Anderson of the Carolina Panthers revealed the reason he has not played since mid-October.
By Jack Davis  December 9, 2022

One of Biden's 'gender-fluid' Department of Energy officials is being charged with stealing luggage at an airport - again.
By Richard Moorhead  December 9, 2022

His symptoms started to show themselves after the Jets' game against the Chicago Bears Thanksgiving weekend.
By George Upper  December 9, 2022

The second installment of the "Twitter Files" has been released on Thursday, revealing even more information about the company.
By Michael Austin  December 8, 2022
Next