The high-water mark of California Sen. Kamala Harris’ run for the presidency came not from a moment of soaring rhetoric or a surprising electoral victory.

It came from attacking Joe Biden on racial issues.

It all went downhill from there — but thankfully, because that attack covers over some of Biden’s potential issues with minorities and because of the fact she didn’t come with the baggage that the other finalists did, the deus ex machina of the running mate slot proves it wasn’t all a loss.

Now it’s time for the media to pretend she didn’t really heavily imply Biden was a racist.

So let’s back up, since Democrat memories are notoriously short. Long before cringeworthy gaffes like “if you have a problem figuring out whether you’re for me or Trump, then you ain’t black” — even before he entered the race, in fact — Biden’s soft underbelly was considered his history on race.

He’d co-authored the 1994 crime bill that liberals now claim led to “mass incarceration” among people of color. He’d been chair of the Senate Judiciary Committee during the Clarence Thomas/Anita Hill hearings and was seen by the left, in retrospect, to have acquitted himself poorly during the affair.

And, most crucially, he’d worked with arch-segregationist senators to stop federal busing programs back in the 1970s. Those programs sought to balance out racial demographics in public schools by busing black students to mostly white schools and visa versa.

Federal busing was a bad idea for a variety of reasons. However, it was also a bad idea to work to stop busing, as Biden did, with legislators like former Mississippi Democratic Sen. James Eastland — a man who, The New York Times pointed out in his obituary, made his name in Congress by frequently rising to complain about potential race “mongrelization” and was fond of referring to black people as “an inferior race.”

Biden inexplicably managed to pick this decades-old scab open on the campaign trail by not only bringing up his working relationship with Eastland but saying it symbolized a different era of “civility” in politics.

It wasn’t a case of when the Democrats were going to draw blood on the issue, it was who was going to do it first.

During the first round of primary debates in June 2019, Harris was happy to do so — telling Biden he wasn’t necessarily a racist, just someone who made common cause with racists and supported racist policies. You know, like a racist would.

“I will say also that in this campaign, we’ve also heard and I’m going to now direct this at Vice President Biden, I do not believe you are a racist,” Harris said.

“And I agree with you when you commit yourself to the importance of finding common ground, but I also believe — and it’s personal and I was actually very — it was hurtful to hear you talk about the reputations of two United States senators who built their reputations and career on the segregation of race in this country. And it was not only that, but you also worked with them to oppose busing.

“And you know, there was a little girl in California who was a part of the second class to integrate her public schools and she was bused to school every day. And that little girl was me.”

This was the equivalent of telling someone, “I don’t believe you have an unhealthy lifestyle. I’m just saying you eat at Burger King three times a day and you wind down in the evening with a six-pack.”

I was watching the debate with my wife and we both agreed that if Harris wasn’t the nominee and Biden was, she’d just become the frontrunner to be his running mate. It’d explain away all that Eastland garbage. The only problem would be explaining away how Harris had implied Biden was a racist.

How foolish we were. Why explain it away yourself when you have the media to do it for you? 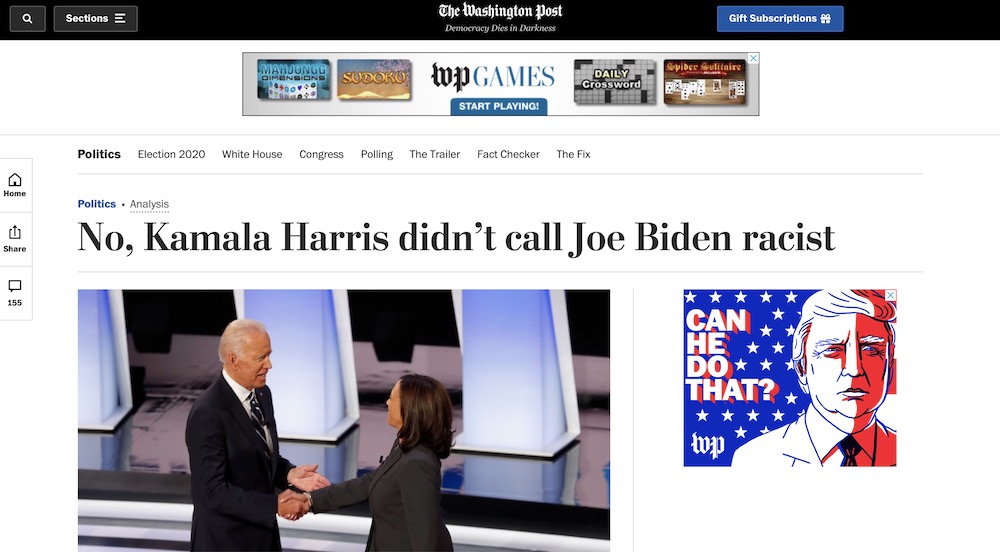 Yes, the old Richard Pryor defense makes an appearance. Who are you going to believe: The Washington Post or your lying ears?

Those words were from Trump campaign advisor Katrina Pierson: “Not long ago, Kamala Harris called Joe Biden a racist and asked for an apology she never received.”

Part of Pierson’s statement is indeed incorrect — Harris never asked for an apology — but that’s not what you were clicking on the piece for, nor was Bump particularly interested in addressing it.

The debate exchange, Bump said, was “an effective attack that briefly elevated Harris into the upper tier of the field. But it was not an accusation that Biden was racist.

“In fact, Harris prefaced her comments by specifically saying she wasn’t making that accusation,” Bump wrote.

Yes, and Marc Anthony was there to bury Caesar, not to praise him. Bump tried to recontextualize Harris’ attack in the events of the days that followed the debate. First, Biden apologized for his comments on the good old days when you could work with good old Dixiecrat dinosaurs like Eastland and others and not face uncomfortable exchanges like this. He added he was “sorry for any of the pain or misconception I may have caused anybody.”

Harris, being part of that “anybody,” was willing to half-accept Biden’s apology.

“He says he’s sorry, and I’m going to take him at his word,” Harris said. “But again that doesn’t address the issue of busing in America.”

However, she praised Biden for the “courage” his apology required and said he was “right to recognize the impact of his words.”

Because of course she did. At least in that fight, she’d landed a knockout punch. There was no sense in jumping on Biden, splayed on the canvas, and continuing to pummel him about the head. At some point, voters know when a beating becomes supererogatory.

To Bump, however, this was evidence there was no implicit accusation of racism in Harris’ words.

“That, again, is not how the Trump campaign statement presented the interactions. Instead, Trump’s team — or, at least, Pierson — appears to be using ‘called him racist’ in the ironically broad sense of ‘raised questions about his approach to race,'” he wrote.

“It’s a not-uncommon conflation to assume that race-centered questions about behavior are necessarily questions about racist intent, but it’s a generally unsophisticated one. What’s more, if that’s the bar for calling someone a racist, there are probably few politicians in America who have been ‘called a racist’ more frequently than Pierson’s boss, President Trump.”

This is some astounding verbal prestidigitation.

First, if you or anyone in your family knows what the “ironically broad sense of ‘rais[ing] questions about his approach to race'” is — or if you’re Philip Bump and have a few spare minutes to explain it — please contact me.

It apparently means something, because there was a Post writer who used it and an editor who gave the article their imprimatur, but nearest I can tell, this is just as ironic as when Alanis Morissette informed us irony was “a black fly in your Chardonnay” and “like rain on your wedding day.”

Furthermore, this wasn’t merely “race-centered questions about behavior,” an incredibly euphemistic way to frame the most inflammatory exchange of the debate season.

This wasn’t “White Fragility“-style microaggressions being discussed here, like calling someone out for not properly centering the concerns and speech of persons of color. It was Kamala Harris excoriating Joe Biden out for working with segregationist senators on a policy she heavily implied was racist and would have denied her a good education.

You can’t just minimize that by calling it “race-centered questions about behavior,” the same way you can’t just call Hurricane Katrina “a prolonged period of rainy weather in New Orleans.”

Furthermore, Bump called this a “not-uncommon conflation” but “a generally unsophisticated one.” Why? We’re just supposed to accept this on its face, since no argument is given to back it up. It’s not particularly unsophisticated if you believe the self-evident fact there are implications behind words or consider the effect Harris’ words had.

“What’s more, if that’s the bar for calling someone a racist, there are probably few politicians in America who have been ‘called a racist’ more frequently than Pierson’s boss, President Trump,” Bump declared.

That’s entirely accurate. And just like Harris calling Biden a racist doesn’t make him one, the same could be said for Trump. Thanks for pointing that out, I suppose.

Also, it’s worth noting Bump’s short piece focused on what happened after that debate. Before it, Harris was making the same kinds of statements, only with more barbs attached.

“We cannot be ignorant of the history of race in this country. And certainly, anyone who is a leader should not be,” Harris told CBS’ “Face the Nation” after Biden’s “civility” remarks. “I would not be a member of the United States Senate if those men that he praised had their way.”

So Biden worked with men who would have denied her an education and denied her a Senate seat — but Harris isn’t calling him a racist, according to Bump.

If you draw that conclusion from several dog whistles (which were really just whistles), you’re using “generally unsophisticated” logic.

And so it begins. Harris wasn’t really implying what she was implying. Don’t believe your lying ears — and don’t believe that it was part of the reason why Biden chose Harris as his running mate.