In a post without comment, Snoop Dogg shared an image modeled after the opening of the 1970s sitcom “The Brady Bunch.”

It featured the black conservatives in boxes around the words “The Coon Bunch.” 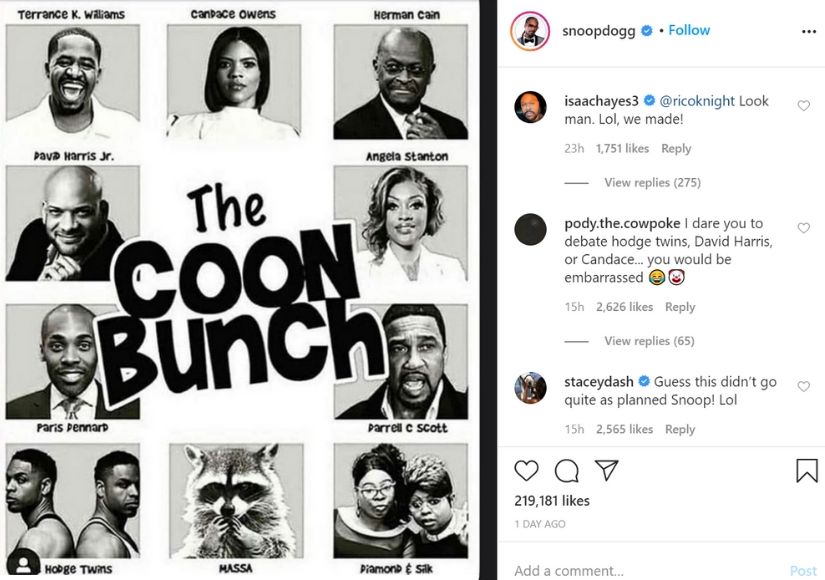 “Hey Snoop thanks for the shout out. I see you didn’t get the memo but democrats don’t own black people anymore if you don’t believe me read your comments,” they wrote.

The twins also fired back over Snoop Dogg’s use of the racial slur in a lengthy post on their Instagram page.

“@snoopdogg posted this today calling us along with other black conservative Americans ‘coons’ for aligning with Republican Party. Sorry but we think with our minds not our skin color. Our black ancestors heard chants of ‘coon’ before the KKK hung them from trees.,” the Hodge Twins wrote.

“KKK was started by the democrat party by the way. But here in 2020 blacks are calling other conservative blacks this which is low IQ ass backwards. Snoop was cool with Trump until he ran for President. Also what’s up with the Raccoon in the meme as ‘massa’ shouldn’t it be a white man?” the post concluded.

Scott fired back at Snoop dog on Twitter, accusing the rapper of being a police informant and a sellout.

“I see that snitch @SnoopDogg posted a meme calling Black Trump supporters(including me) ‘Coons’. This from a has been old skool washed up ‘gangster rapper’ who wore an apron on a cooning..uhhh. I mean cooking show with Martha Stewart,” he said.

I see that snitch @SnoopDogg posted a meme calling Black Trump supporters(including me) “Coons”. This from a has been old skool washed up “gangster rapper” who wore an apron on a cooning..uhhh. I mean cooking show with Martha Stewart. Somebody call Takeshi6ix9ine for me.

Related:
Diamond's Cause of Death Revealed as Death Certificate Details Are Released

Meanwhile, Angela Stanton-King responded to Snoop Dogg by posting an image of the rap star posing with President Donald Trump.

If I’m a Coon @SnoopDogg what’s this?! pic.twitter.com/Xrh6aJn6B4

The Georgia congressional candidate elaborated on her thoughts in a video post.

It’s time to address the Hypocrisy when it comes to politics ?? pic.twitter.com/GmJRGRC0mO

Paris Dennard, when asked on Twitter about the comments denigrating him, responded by saying, “Bigotry knows no color.”

While the slur used by Snoop Dogg against the black conservatives is one that has been around for more than a century, it is now commonly used by some black Americans to attack other black Americans who do not align with the politics of the Democratic Party.

Johnathan Jones
Johnathan Jones has worked as a reporter, an editor, and producer in radio, television and digital media.
Johnathan "Kipp" Jones has worked as an editor and producer in radio and television. He is a proud husband and father.
Longtime Assistant Divulges 'The Secret Recipe of Ronald Reagan' on Former President's 112th Birthday
Biden Admin Imploding as New York Times Turns on Kamala Harris: 'Can't Think of One Thing She's Done'
'Alien Freak': Madonna Blasted for 'Unrecognizable' Look at Grammys
Green Fail: Dozens of Windmills Bailed Out by Diesel Generators - And Look What They Sprayed Into the Countryside
WHO Appears to Make Massive Move for China in Naming Newest Variant: 'If the WHO Is This Scared of the Chinese Communist Party ...'
See more...
Advertisement