The Socialist Party of Great Britain doesn’t do much business at the polls these days. After all, up until getting demolished by voters in December, the Labour Party’s Jeremy Corbyn was socialist enough for anyone who cared about these sorts of things, and a whole lot more electable.

However, what the Socialist Party lacks in support at the ballot box it makes up for in memes. While its webpage is a mess of 2012-ish proportions, its Twitter account is full of political cartoons and other images you can share with your comrades.

Take, for instance, this very scientific diagram showing exactly how you’re being exploited by the system, wage-slave:

Those preoccupied with how much tax the government takes from their income, should be focusing on how much unpaid wealth they create gets taken by their employers. Capitalists will always want workers’ taxes cut because higher income taxes pressure employers to pay higher wages. pic.twitter.com/Lrfu2olSml

Color me changed. I’m just going to step away for a second so I can donate to Bernie’s campaign.

It’s not just wage slavery that the Socialist Party is against, of course. It’s also against the capitalist health care system. Thanks to the running dogs of the free market, you’re being kept from the utopia of socialist medicine. Thank God for that, I say, but the socialists have a different take — one which they unwisely decided to put into meme form.

“Capitalism’s admirers really don’t like its failure to provide decent health care for all being exposed, nor how this would be a basic human right in the class-free state-free money-free future socialist society,” the Thursday post read.

Actually, they rather would, although for reasons that may not be entirely apparent at first glance:

The provenance of those pictures would immediately prove tricky for the Socialist Party.

First, the long line — or queue, as the Britishers might say — doesn’t come from a “capitalist” hospital. It’s from the Sunbury Health Centre in Surrey, United Kingdom, courtesy of Britain’s own state-run National Health Service.

The problem with the center is the incentive system in the NHS, as the 2014 U.K. Daily Mail article where the picture in question originated explains:

RELATED: The UK's Divorce from Europe Is Now Complete as Transition Period Ends 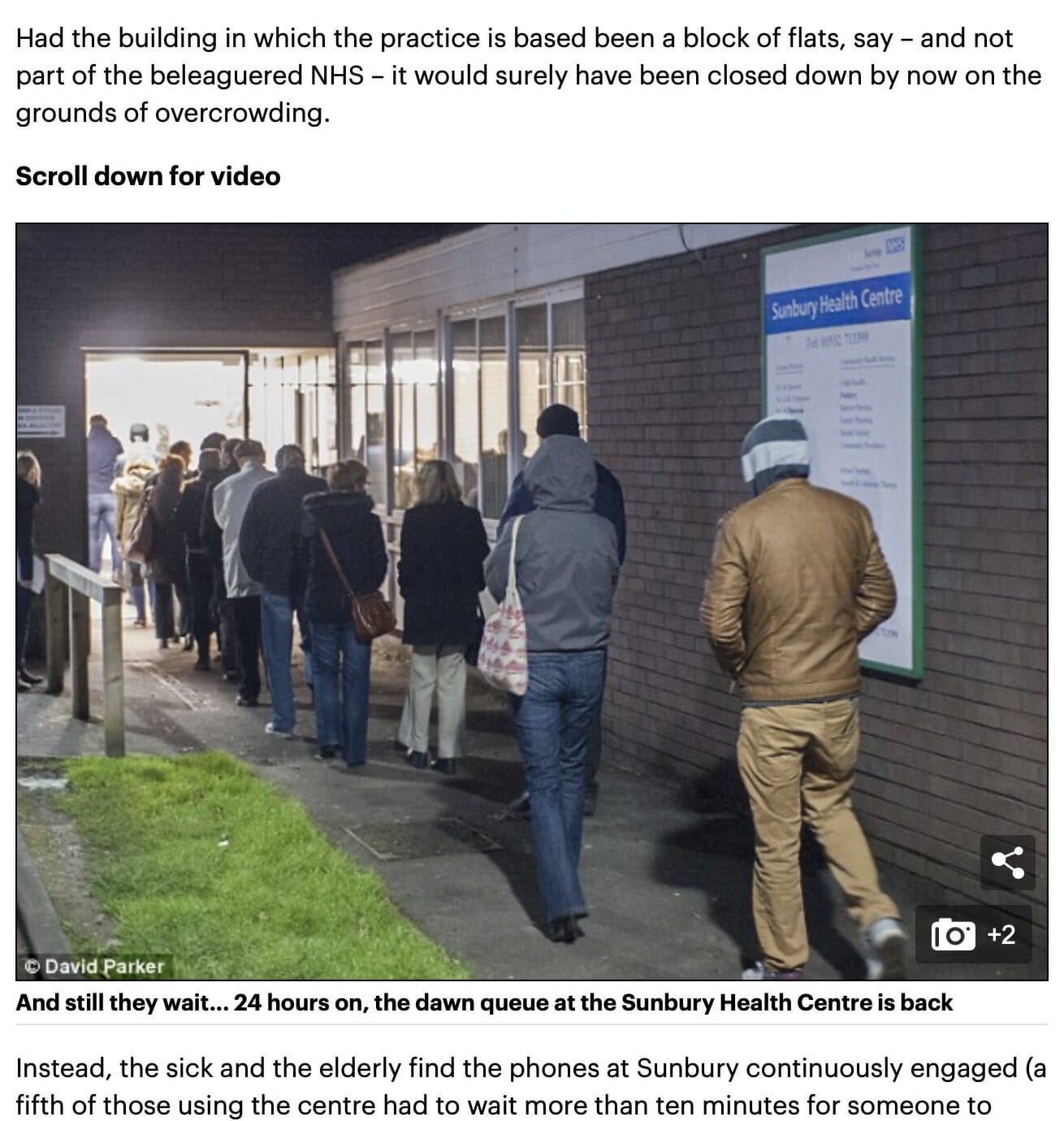 “The fact remains that more patients equals more money — for GPs [physicians]. As its patient roll has increased, so has the NHS money flowing in to the surgery, which, like other practices, is paid £73.56 [$96.10] per patient a year,” the Daily Mail reported

“Under the latest GP contracts, they are also paid £7.64 [$9.98] for vaccinations such as flu and MMR jabs and £55 [$71.85] for every patient diagnosed with dementia; GPs qualify for the payment if they diagnose the patients themselves (with no checks as to whether their assessment is right), or if they update their records when their patients receive diagnosis in hospital.”

So, about that picture in the party’s tweet of what “socialist” medicine looks like? You probably guessed it’s from a capitalist hospital — in this case, St. Luke’s University Hospital in Bethlehem, Pennsylvania.

In a report on St. Luke’s, the newsletter of the Lehigh Valley Economic Development Corporation identifies the modernistic equipment pictured as a Discovery IGS 730 Hybrid OR, a mobile operating theater that “gives physicians flexibility during even the most complex procedures, which means having complete access to the patient while helping maintain sterility in the OR environment, and allows the doctor to move the unit completely out of the way during surgery.”

You never get anywhere in the political sphere by apologizing for accidentally telling the truth, which the Socialist Party of Great Britain realized. Their explanation for the meme: the NHS isn’t really socialism, and capitalism now will be socialism when it’s implemented.

“Some people want an apology for this. [laughing emoji] ‘It isn’t true’ they say,” the party’s account tweeted on Saturday.

“YES IT IS. We know the queue is in Britain. Guess what: BRITAIN HAS CAPITALISM! The NHS is dependent on capitalism for its state funding. And as socialism is yet to exist, the other photo is merely representative.”

Some people want an apology for this 😂. “It isn’t true” they say. YES IT IS. We know the queue is in Britain. Guess what: BRITAIN HAS CAPITALISM! The NHS is dependent on capitalism for its state funding. And as socialism is yet to exist, the other photo is merely representative. pic.twitter.com/BLvl51Bx7d

Except the NHS is … oh, why bother with the facts? They didn’t.

The sad thing is that, even in spite of the blue checkmark, you can’t actually be sure this isn’t a parody account.

I mean… Even socialists can’t be this stupid. https://t.co/1pBdjafh55

After all, what to say about tweets like this?

Are you about to tell us “Socialism was tried in Russia” or “Look at Venezuela” etc? It has NEVER EXISTED! It comes AFTER global capitalism! pic.twitter.com/Rr1Ra0ugbE

On balance, the fact that the Socialist Party of Great Britain hasn’t challenged the page and had it taken down for impersonation should probably be a sign that this, sadly, is actually how daft socialists really are.

However, the British socialists are still canny enough to have £1.3 million in property and cash reserves despite only having 300 members, according to a BBC report from 2015, even though the party wants to abolish private property and money.

“We are not a charity, we are not giving it away to the poor, we are using it to propagate the case for socialism.”

Considering the relative success of party’s efforts on social media, perhaps it’s time to consider that whole “giving it away to the poor” thing.