The founder of The Western Journal was a guest on Tucker Carlson’s Fox News program Thursday night to discuss Facebook’s recent “trusted sources” news algorithm change, which has resulted in conservative sites seeing double-digit decreases in traffic, while liberal ones have stayed the same or gained.

Western Journal founder Floyd Brown told Carlson that Facebook has in fact “broken its trust with the end user.”

An original study by The Journal — published earlier this month and reported on widely by other outlets — documented the change in reach to various news outlets based on their ideological bent, following Facebook’s February algorithm change.

The findings were unequivocal: the left of center sites saw a nearly 14 percent increase in traffic, while the most popular conservative sites witnessed a 27 percent decrease.

“Facebook is not a neutral host,” Carlson said in response to these findings. “It has a political agenda. Earlier this year, Facebook altered its algorithms for what news stories its users see, and the results conclusively have been devastating for conservatives online.”

He noted Breitbart, which was among the most popular conservative sites on Facebook, has seen a 30 percent drop in traffic. Carlson’s own Daily Caller has been greatly impacted, as has Independent Journal Review, which the Fox host said may reportedly soon have to shut down. The site Rare already has. 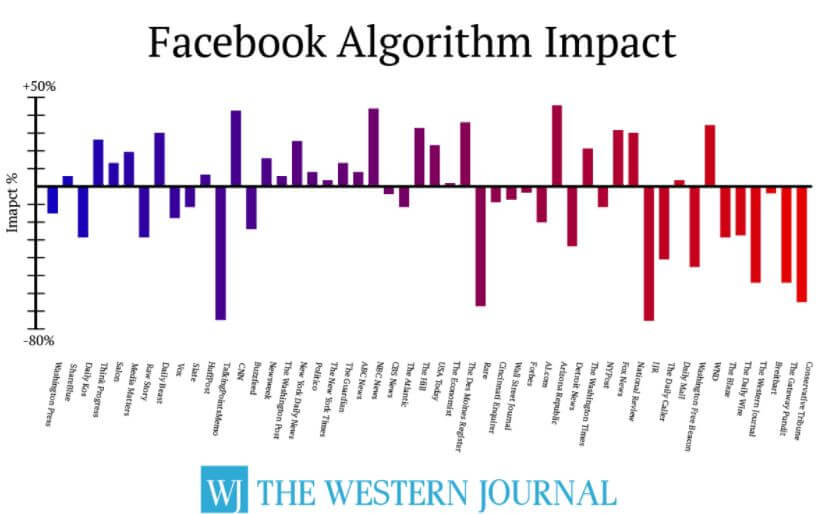 Brown told Carlson The Western Journal has been hit by the change as well. The Journal was in the top 20 most engaged sites on the entire Facebook platform in December and the top five news sites in January, just behind The New York Times, according to Newswhip.

Following the algorithm change, which The Journal determined was implemented in early February, Western dropped to No. 12 among news sites, coming in behind Yahoo.com, while The Times remained the same at No. 4. Meanwhile, NBC sprang to the top of the list and CNN went from No. 16 to No. 2.

“And so, we were all of a sudden getting great content that we all wanted to follow it and consume it, and as a result of that, Facebook went through the roof,” Brown stated.

Facebook has now nixed that model, the conservative publisher observed.

As reported by The Journal, Campbell Brown, a former anchor on NBC and CNN who now leads Facebook’s news partnerships team, told attendees at a recent technology and publishing conference that Facebook would be censoring news publishers based on its own internal biases.

“This is not us stepping back from news,” she said. “This is us changing our relationship with publishers and emphasizing something that Facebook has never done before: It’s having a point of view, and it’s leaning into quality news. … We are, for the first time in the history of Facebook, taking a step to try to to define what ‘quality news’ looks like and give that a boost.”

Facebook CEO Mark Zuckerberg informed users of the change to “trusted sources” as well, writing in a late January post: “There’s too much sensationalism, misinformation and polarization in the world today.”

“This (trusted sources) update will not change the amount of news you see on Facebook. It will only shift the balance of news you see towards sources that are determined to be trusted by the community,” wrote Zuckerberg.

Floyd Brown argued the change has meant Facebook is “now optimized to the thought police.”

He contended, “It’s no longer a social network when Mark Zuckerberg and the other elites in Silicon Valley decide what you should get, the information that you should consume and really, decide from on high what news you should have.”

Roe v. Wade has finally fallen. Now, America has an opportunity to reaffirm a culture of life.
By Paula White-Cain  June 28, 2022

The California Department of Justice released the personal information of thousands of concealed carry permit holders.
By Richard Moorhead  June 28, 2022

Remains of Teen Girl Found Years Ago in Texas Finally Identified, Search for Murderer Is On

It took years of waiting, DNA testing and a genealogist to link the remains to a missing person case from 2000.
By Amanda Thomason  June 28, 2022

Adventurous Dog Attracts So Many Passersby That Owners Finally Put Up Sign: 'We Know He's Up There!'

Several people a week were knocking on their door to tell them about their crazy dog, so they decided to put up a sign explaining his antics.
By Amanda Thomason  June 28, 2022

'Investigations should be considered as to funding and travel of what appears to be professional agitators,' Stenger said.
By Andrew Jose  June 28, 2022

Fentanyl consumption can result in respiratory issues and death when one takes it in large doses or mixes it with other substances.
By Andrew Jose  June 28, 2022
Next