There are a few reasons why a bank might cancel your credit cards. If you’re delinquent with payments, for instance, that’ll get your cards canceled pronto.

It’s much rarer that a bank will cancel the cards because you pose a “reputational risk.” This isn’t common and when it happens, you would assume it would involve an ultra-fringe figure — or someone whose use of the card represents some kind of criminal threat.

In the case of retired Army Gen. Michael Flynn’s family, one would assume the “reputational risk” is Michael Flynn himself.

In a post on his Telegram account on Sunday night, Flynn shared a letter his family had received from Chase Bank titled, “Update: We are closing your credit cards.”

“After careful consideration, we decided to close your credit cards on September 18, 2021 because continuing the relationship creates possible reputational risk to our company,” the letter, dated Aug. 20, stated.

“You may receive additional account closing notifications if you have other accounts under a different name or address.” 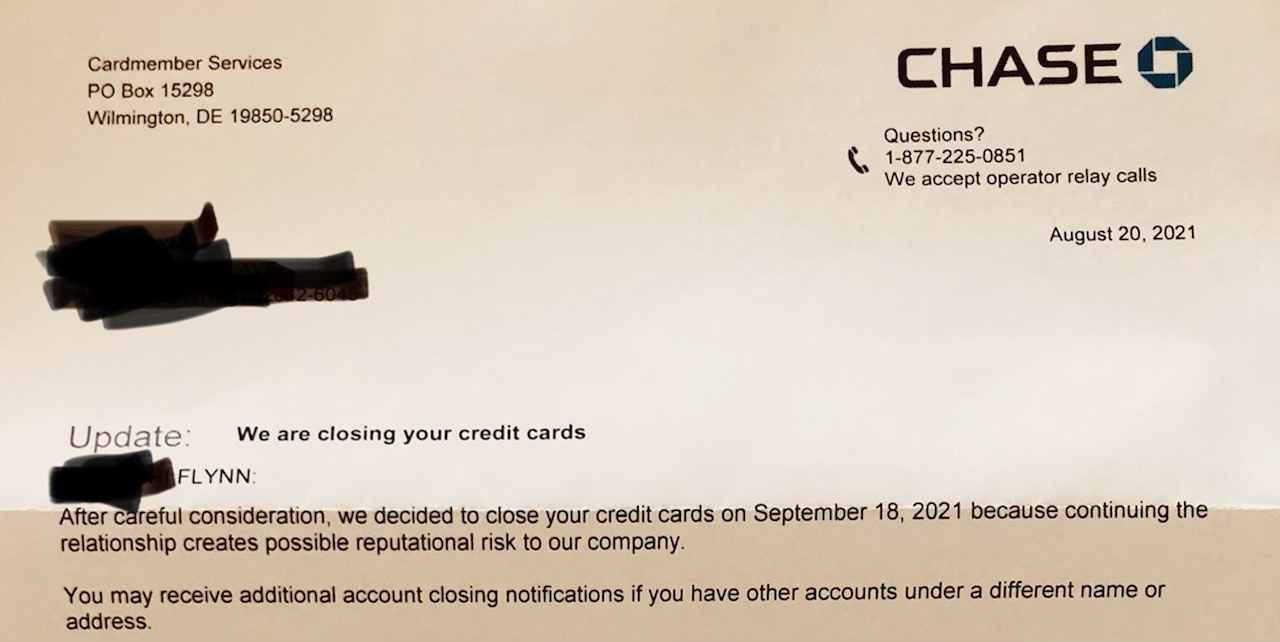 “They need to deal with their own reputation instead of persecuting my family and I. DOJ dropped my case for their own egregious government misconduct, appears you weren’t that lucky with the DOJ. I guess my America First political views don’t align with yours. Your loss.” 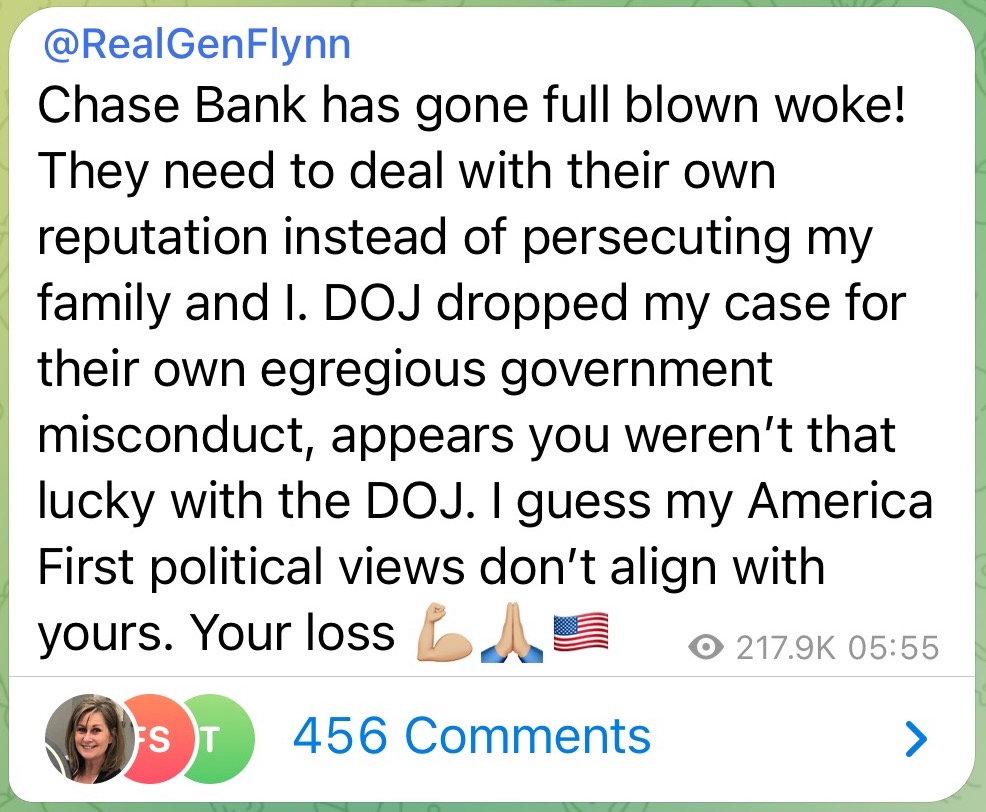 Flynn was referring to the criminal case in which he was accused of lying to the FBI in an interview about his contact in 2016 with then-Russian Ambassador Sergey Kislyak, during the transition period preceding the Trump presidency. At the time, Flynn was the incoming national security advisor.

According to a Fox News timeline of the case, Flynn initially pleaded guilty, but then moved to withdraw the plea after evidence of FBI misconduct began to mount.

In April 2019, after FBI documents emerged in which top bureau officials openly talked about whether the goal of the interview with Flynn was “to get him to lie, so we can prosecute him or get him fired,” the Department of Justice moved to drop the case.

In an unusual move, the judge hearing the case and even the full D.C. Circuit Court of Appeals denied the motion, keeping the case against Flynn alive.

Related:
YouTube Punished WJ Over Flynn Interview, Election 'Misinformation,' But These Facts Are on Flynn's Side

Flynn eventually received a pardon in November 2020, after the presidential election, from then-President Donald Trump. However, the former general remains controversial for his outspoken social media presence, even though he was banished from Twitter in the wake of the Jan. 6 Capitol incursion; a Twitter spokesman told NBC News Flynn was banned for “sharing QAnon content.” (He’s not banned on Facebook, but hasn’t posted on the platform since April.)

If they can’t imprison him or silence him, they’ll freeze him out of society instead.

Coverage of the Chase letter in the U.K. Daily Mail filled in some of the details of the card cancelation. The letter wasn’t to Flynn himself, but his wife, Lori, the Daily Mail reported.

And, of course, Chase said the letter was a “mistake.” Because it’s always a “mistake” when this happens to a conservative.

“We’ve contacted our customer to let her know that we made an error and we apologized for any inconvenience this caused,” a spokesman for Chase said, according to the Daily Mail. However, there was no explanation of how the “error” was made.

Either these sorts of “errors” happen with conspicuous regularity to conservatives — particularly on social media — or Amal Clooney and Chrissy Teigen don’t post it on social media when Chase erroneously cancels their accounts for representing a “reputational risk.”

However, there are some interesting parallels here — particularly with the Book of Revelation and the Chinese Communist Party.

While Chase isn’t exactly the antichrist, the company has managed to pull from his playbook, in this case attempting to deny Flynn the ability to conduct commerce since he doesn’t bear the figurative mark of woke approval.

This is the same narrative we see play out in the Book of Revelation, which many Christians believe predicts that the world system will grow so powerful and so hateful of Christians that it will require all people to receive a special mark without which they will not be able to buy, sell, or trade. While Flynn’s experience is not Revelation playing out, it could well be a small preview of what the global elite will do once they can get away with it.

If you want to look at this at a more secular level, consider China’s social credit system, where the state tracks everything individuals do, rewards the compliant and punishes the insubordinate. The great thing about our new, American wokeness is that our government doesn’t need to tell corporations who should be unpersoned. It’s all decentralized.

Google, Twitter, Chase, they’ll do it on their own — perhaps with a push from an activist group or three, but usually without interference from elected officials. Whatever the case, they can deprive you of free speech on the major social media platforms — or, in Chase’s case, deprive you of the basic necessities of living in a modern society.

Or maybe it all really was an “error.”

Chase’s announced intention to cancel Lori Flynn’s cards should serve as a warning: If conservatives don’t start taking action against woke corporate behemoths, those behemoths won’t have to backtrack and pretend this was an “error” for much longer.