A Seattle woman is criticizing The Home Depot for the way one store handled an “incredibly offensive” note that a delivery driver left at her front door.

Lara Zarowsky told KING-TV that she missed the delivery of a refrigerator she had purchased for her new Seattle home.

When Zarowsky read the missed delivery note left at her door, she was troubled by the hand-written, four-letter word — or acronym, depending on how you view it — that the driver had left behind.

“She says, ‘Oh I talked to the driver, and he says it means, ‘See you next time,'” Zarowsky said. “I didn’t accept that as an answer as I think most people wouldn’t.”

Zarowsky said Home Depot did not take her concern seriously until she canceled her order and posted a photo of the notice on Twitter. 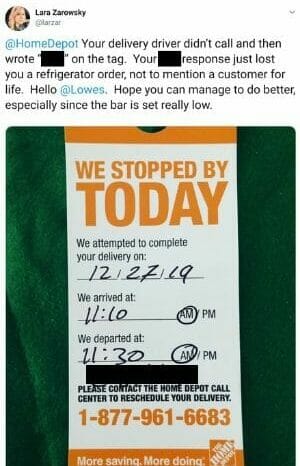 In the tweet, Zarowsky wrote that the delivery driver “didn’t call” and then left the offensive note, prompting her to cancel her order entirely and take her business to a competitor.

The same day, Home Depot responded to Zarowsky’s post, writing that the driver’s action was “completely unacceptable,” and requesting additional details so they could investigate.

Even if the driver made an innocent mistake, Zarowsky said the incident needed to be exposed so that it would not happen again.

“I just really would want this person to understand that this is a frightening thing they did, that they actually invoked fear,” Zarowsky said, “for whatever reason they felt compelled to do that it’s a scary response for a woman coming home, knowing that the person who just left that note knows exactly where she lives, and could be back at any time.”

Home Depot told Newsweek that the driver who left the note had been hired by a third-party and would no longer be making deliveries as a Home Depot representative.

“We’re disgusted that a customer experienced such incredibly inappropriate behavior from one of our third-party drivers,” a Home Depot representative told Newsweek. “The person responsible for this message will no longer make deliveries for The Home Depot, and we have reached out to the customer directly to resolve this matter.”